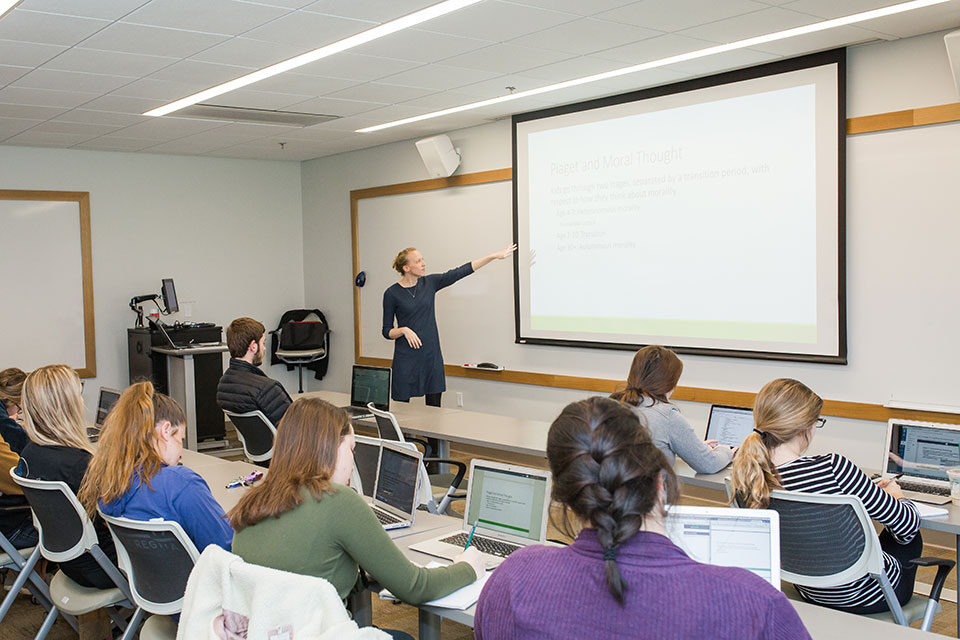 The Faculty Recognition Award, presented annually by the Office of Student Affairs, is awarded to a full-time member of faculty with at least three years of service at Salve Regina University. Seniors and juniors are invited to nominate and select recipients based on criteria of teaching, campus leadership and student advocacy.  The recipient of this year’s Faculty Recognition Award was a member of the Department of Psychology, Dr. Kaitlin Gabriele-Black. 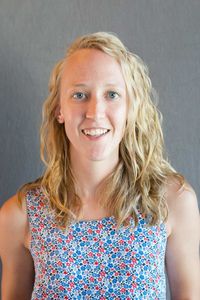 “It’s an enormous honor to win it, and not something that was on my radar whatsoever, given that this was only my third year at Salve,” said Gabriele-Black. “There are so many strong teachers here, and to be counted among them is huge.”

Gabriele-Black started at Salve Regina as a visiting assistant professor in 2017 and then transitioned to tenure-track in 2018. Even though she feels like she hasn’t been here very long, Salve Regina has been a great fit for Gabriele-Black in so many ways, including teaching and research.

“I’m admittedly biased, but our psychology students are the University’s best, and they make this job fun and deeply rewarding for me,” said Gabriele-Black. “I’m also situated in a supportive department where creativity is encouraged. Many faculty have acted as mentors, eager to help me be successful here. I couldn’t have asked for a better place to work.”

The 2019-2020 academic year was extremely tough due to the remote learning that faculty found themselves in, and Gabriele-Black had to reimagine many of her classes. She tried to remain stable yet flexible for her students, who she knew were navigating a difficult time.

“To stay connected, I held virtual drop-in office hours and also met with students one-on-one when needed,” said Gabriele-Black. “Additionally, I checked in individually with each student at multiple points throughout the semester. It meant a lot of emails, but it felt necessary given the loss students were experiencing after being ripped away from normal college life.”

One of the classes Gabriele-Black teaches is Stats & Research Methods, a year-long integrative research methods and stats course that every psychology major has to take in order to graduate. It’s one of the unique things about Salve Regina’s psychology program in particular, according to Gabriele-Black.

“Over the course of the year, students work in groups designing and conducting a study focused on a topic that I decide for the year,” described Gabriele-Black. “So back in September, I decided that our projects for the year were going to be about medical and mental health bias after I’d been reading about people … who had faced horrific racism and homophobia within the medical field.” 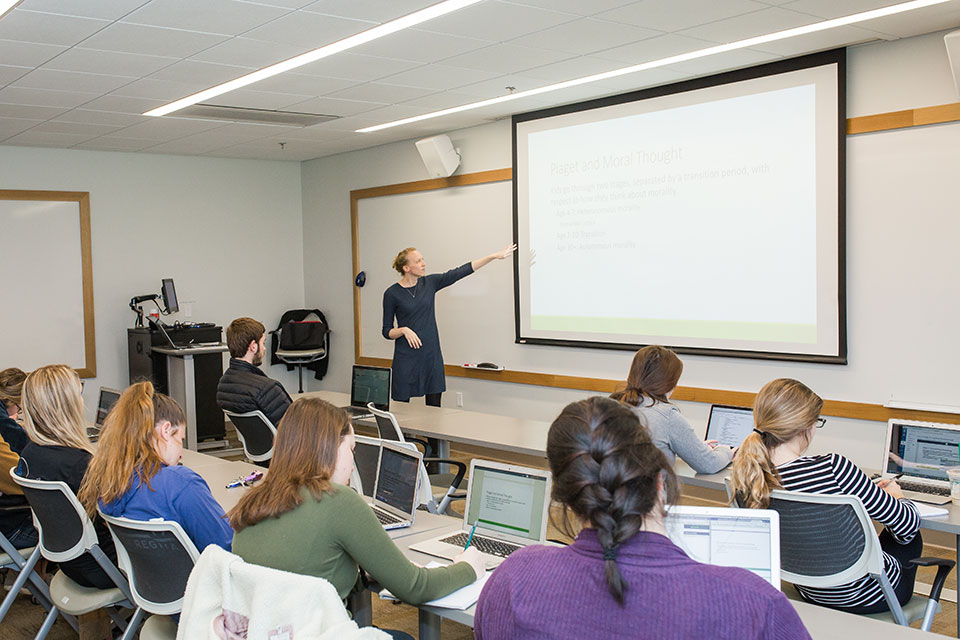 Photo taken in 2018 during one of Gabriele-Black’s classes.

Gabriele-Black’s students worked in groups to pick two variables of interest to them, and then they designed a study to test whether or not these variables would be significant in a medical or mental health setting. Students picked variables like gender, race or age. Students then made questionnaires and tweaked their variables of interest in their questionnaires, surveyed hundreds of Salve Regina students and looked to see if there were statistical differences in how patients were treated based on their selected variables.

The students were supposed to present their findings in posters at SRYou Student Exposition in March, but because of the pandemic, that was cancelled. There are usually about 50 students working in groups of 4-5, so there usually ends up being about 11-12 posters every year.

Instead, Gabriele-Black’s students uploaded one-minute videos of themselves describing their projects just to demonstrate to her that they could give a presentation. She and her husband then came up with a video collaboration to honor the student’s year-long work.

“I think this issue of medical bias and mental bias—we’re seeing it now, especially in the news where the levels of people who are being diagnosed or dying from COVID—it’s disproportionally people of color,” said Gabriele-Black. “I’m proud of my students for picking up this topic, but really running with it and looking at real-world problems and issues that they’re going to grappling with beyond Salve.”

Students speak about experience with the Stats & Research Methods course 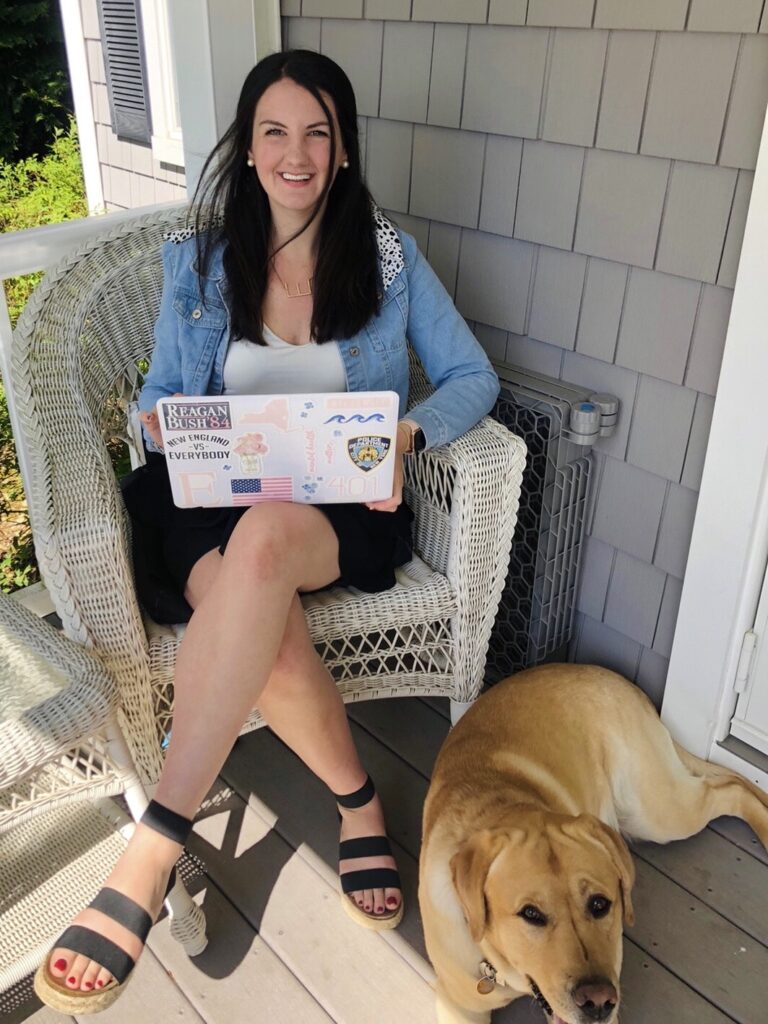 Emma Kiely ’21 at her home in Pleasantville, New York.

For students who participated in the Stats & Research Methods, they gained invaluable research experience completing the project in Gabriele-Black’s class.

“We truly had the experience to construct a research project from the ground up, developing it over the course of a year with a group of our peers and Dr. Gabriele-Black as a mentor,” said Emma Kiely ’21, who is a psychology major with a double minor in neuroscience and biology. “I now feel so much more prepared as I apply to graduate school programs.”

Kiely’s group focused on studying whether race and reproductive health issues are factors that may induce medical bias. Rebecca Ward ’22, a psychology major with minors in Spanish and political science, had a group that chose to look into bias in the medical field in regards to race and weight bias.

“This project was very interesting to complete,” Ward described. “We had to work in groups to both plan and execute this study over the course of the two semesters. Through doing that, I learned how to effectively work in a group, execute a research study, analyze data and write a properly formatted APA study.” 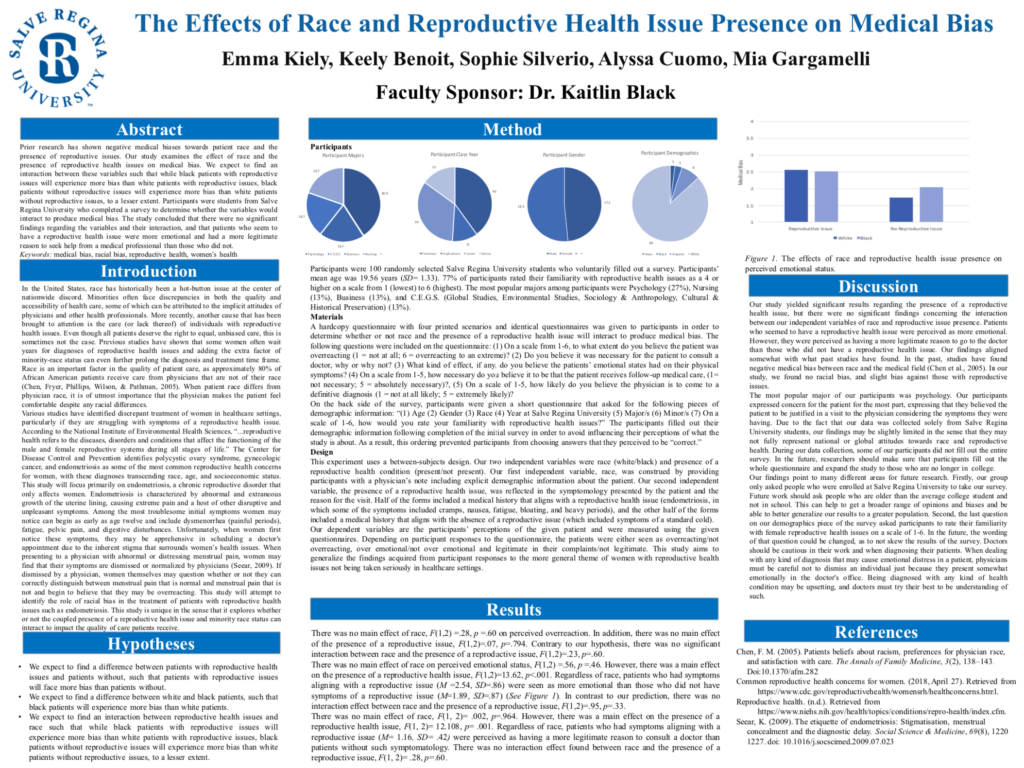 A copy of the group project that Kiely was involved in. 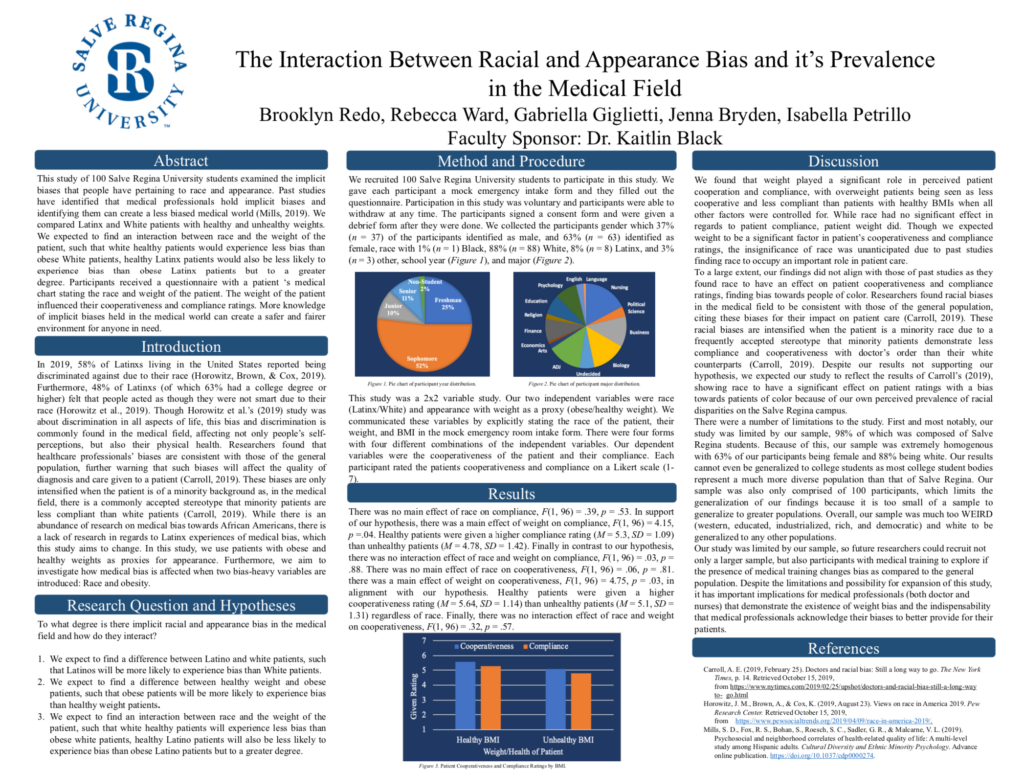 A copy of the poster that Ward’s group made to present their findings.