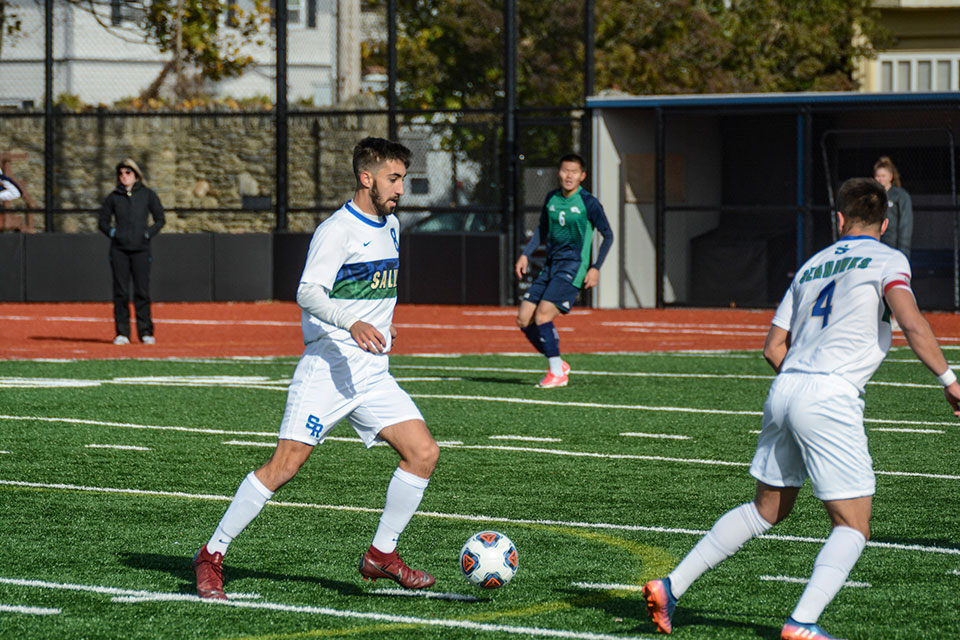 Louis-Felix St. Jean ’22 was named goalie of the week after making a career-high 43 saves Nov. 8 in a 3-2 win over Nichols College. He followed up that strong performance with another 31 saves against Nichols the following night. St. Jean is now 3-0 on the season and leads the conference in goals-against average (1.33) and save percentage (.963).

Alessandro Oggiano ’22 was named offensive player of the week after scoring two goals in the conference championship. His first tally came in the 49th minute to tie the game at 1. In the 69th minute, after Endicott College had regained the lead, he buried a left-footed strike to draw the Seahawks even again and set up the thrilling overtime finish. Oggiano leads the team with 12 goals this season.

Rich Ventura ’22 was named defensive player of the week after shutting down his opponents’ attacks with timely tackles and intercepted passes in the Seahawks’ two tournament games. He also had a goal and assist in the conference semifinal against Nichols College.

Dylan Sock ’23 was named rookie of the week after playing a key role in both of the Seahawks’ tournament matches. In the championship match, he registered an assist on Salve Regina’s second goal of the game, which tied the score at 2-2.

Salve Regina (14-4-3, 6-0-2 CCC) won its fourth conference tournament title and will represent the conference in the NCAA Division III men’s soccer championships in a first-round match with Rowan University at 1:30 p.m. Saturday, Nov. 16.