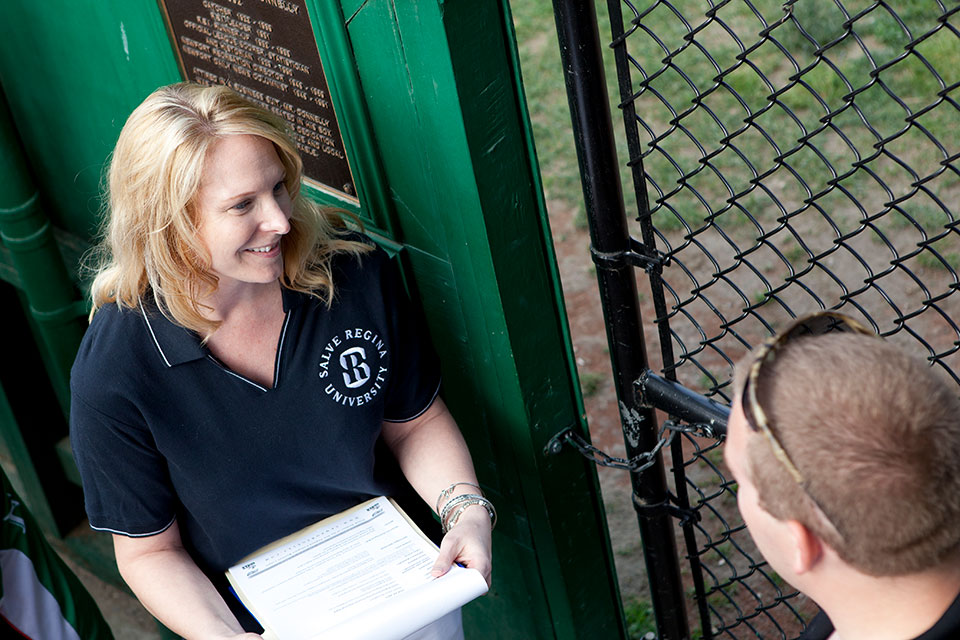 Despite having never scratched out a single, nor recorded a solitary defensive putout, nor even made a lone plate appearance, Kristine Hendrickson is poised to be inducted into the Newport Gulls Hall of Fame – the first woman to receive the honor – when she is enshrined as part of the baseball team’s fifth class.

Salve Regina’s longtime associate vice president for university relations and chief communications officer, Hendrickson has been volunteering with the Gulls since the team first moved to the city in 2001. Chuck Paiva, Gulls president and general manager, recruited her to serve as the team’s director of public relations, a position in the lineup where she has excelled for 18 years.

“Kristine has been involved with the Newport Gulls since our humble beginnings,” Paiva said. “Many of the community programs and communication templates were developed by Kristine and we still use them today. She is instrumental in building our brand, which is now nationally recognized.”

During the last 18 years, Hendrickson helped to create many of the popular community programs still run by the team, leading marketing efforts and planning many team events – including helping to bring the New England Collegiate Baseball League all-star game to Cardines Field for the first time in 2005, facilitating exhibition games against the American and Chinese national teams, and organizing hot stove events, previous Hall of Fame ceremonies, team appearances, parades and more.

“Kristine has assisted in our game day planning and operations, she has been our liaison to our local and federal politicians, and our liaison to the military and Naval War College,” Paiva said. “We are forever grateful to Kristine and we are honored to induct her into our Hall of Fame.”

In addition to her administrative role at Salve Regina, Hendrickson has taught various business and marketing classes at the University and has referred students seeking real-world experience to the Gulls, thus starting the Gulls internship program. The program now receives applications from throughout the country to fill positions in marketing, public relations, media, baseball operations and more.

“Our University community is very proud of Kristine and her well-deserved Hall of Fame induction,” said President Jane Gerety, RSM. “The great passion she brings to her work at Salve every day carries over seamlessly to her volunteer work on the baseball field. Salve is happy to share Kristine with the Newport Gulls as we both work to make Newport a vibrant community. I join so many others in giving her a standing ovation for her efforts. Thank you, Kristine.”