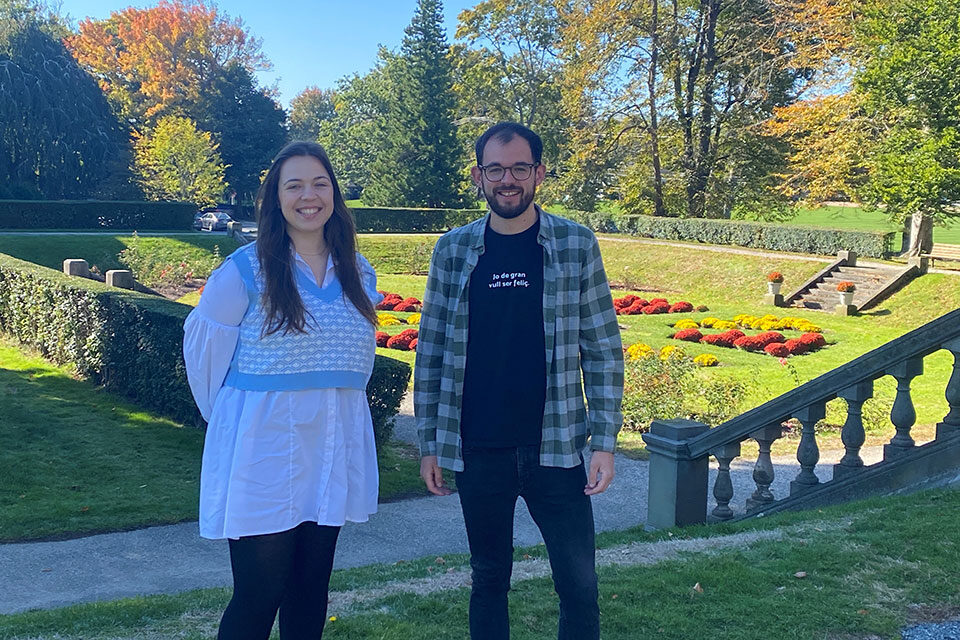 As Fulbright Foreign Language Teaching Assistant Program recipients for 2022-23, Sibylle Marin of France and Borja Gil Garcia of Spain are teaching foreign language classes, living on campus with nine students in the Language House at Carnlough Cottage and taking courses at Salve Regina.

Hosted by the Center for Global Education and Fellowships and the Department of Modern Languages, Marin and Garcia are also facilitating weekly conversation tables for the University community, planning monthly cultural events on campus and assisting with introductory after school language instruction at Pell Elementary School in Newport, Rhode Island.

Born in Dijon, France, Marin’s family moved around a lot while she was growing up, but she has spent the last four years living and studying in Paris at the University of Sorbonne. Fascinated with language learning in high school, she completed an international program with a concentration in English and went on to pursue her undergraduate studies in English and Anglophone Studies at The Sorbonne, graduating with honors.

Marin is currently pursuing her master’s degree at The Sorbonne with a concentration in American civilization. She first learned about the opportunity to travel and study abroad through the Fulbright program from her academic supervisor, but she initially ruled the program out.

“I considered going through the university, but my supervisor kept pushing Fulbright,” she said. “After research, I found Fulbright was a better opportunity than what my university could offer because of all the support.”

At first, Marin considered traveling to a larger city in the U.S., but she is grateful to be in Newport and on Salve Regina’s beautiful campus.

“This is a once-in-a-lifetime experience, and I can’t believe that I’m here,” she said.

After completing her master’s degree program, Marin said she’ll take some time to think about her next steps. She is considering starting a Ph.D. program, teaching English or French as a foreign language, or pursuing a career in higher education international exchanges.

Currently on work leave for nine months to complete his Fulbright program at Salve Regina, Garcia said it wasn’t until he studied and taught abroad in England that his career aspirations started to come into focus.

“That’s when I discovered I wasn’t terrible at teaching and could make a living,” he said.

He learned about the Fulbright program from a co-worker who completed the teaching assistant program almost a decade ago in Ohio.

“I studied American literature and liked it, but everything was in the books,” he said. “It was time to put the books down and go.”

Garcia selected Salve Regina as his top choice and feels very lucky to be here.

“I had actually finished watching The Gilded Age, so I did some research on Newport, saw the mansions, saw the campus and the Cliff Walk, which is one of my favorite things,” he said. “Newport is a very small city, but it has so much history and the natural resources are brilliant.”