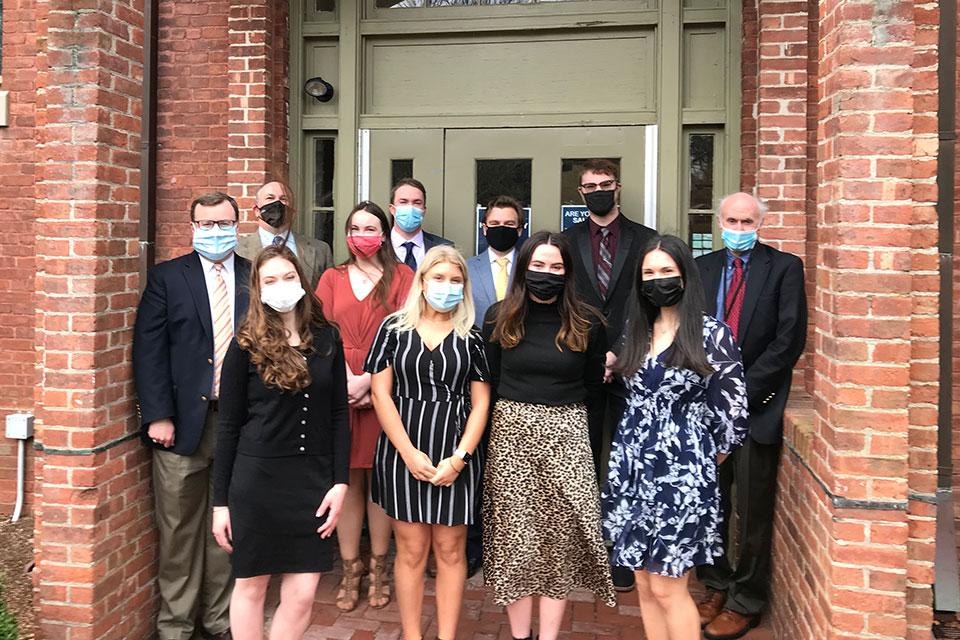 This year’s inductees were:

The event this year also included the granting of the three Department of History awards for graduating seniors: the Florence Kerins Murray History Award, the Brother John Buckley Outstanding Senior Thesis Award and the Pell Medal for Excellence in U.S. History.

The Florence Kerins Murray History Award was given to Anna Paradis. A European history major with minors in dance and psychology, Paradis is from Portsmouth, Rhode Island. Paradis’s academic accomplishments, insightful contributions to class discussions and unfailing support of her fellow students embody excellence in the history major. Paradis’ senior thesis paper, “Sickness, Status, and Stigma: A History of Hemophilia in the Royal Family, 1853-1918,” combined her interest in European history and the history of medicine.

Evan Elichalt received the Brother John Buckley Award for Outstanding Senior Thesis. A Pell Honors student and fellow in the Nuala Pell Leadership Program, Elichalt is a double major in American history and economics with a minor in philosophy from Falmouth, Massachusetts. Elichalt’s senior thesis paper, “The People Versus the Bank: The Jacksonian Populist Campaign’s Influence during the Bank War, 1832-1836,” draws on political and economic history to tell the story of an important antecedent to later populist movements in the United States during the twentieth and twenty first centuries.

The Pell Medal for Excellence in U.S. History was given to Kyra Dezjot. A fellow in the Nuala Pell Leadership Program, Dezjot is a double major in history and secondary education from East Lyme, Connecticut. Dezjot’s commitment to learning, teaching and putting history to use is impressive. She was a leader in reviving Salve Regina’s College Democrats and has been active at the state and national level with College Democrats, currently serving as the vice president of the College Democrats of Rhode Island. Kyra’s senior thesis paper, “A Crime Against Humanity: The True Nature of the Jedwabne Massacre,” tells the little-known story of a pogrom against Jewish residents of small town in German-occupied Poland on July 10, 1941.

Steven Rodenborn, dean of undergraduate studies, offered a welcome from the University. The guest speaker was alumnus John King ’15, who graduated from Salve Regina with a degree in history and secondary education. Since 2016, King has taught social studies and theology at Bishop Feehan High School in Attleboro, Massachusetts, where he also coaches several sports. In addition to working full time, King is nearing completion of a M.A. in history from Providence College.

Founded in 1921 at the University of Arkansas, Phi Alpha Theta has more than 400,000 members and 970 chapters nationwide. This year, Phi Alpha Theta is celebrating its centennial. Dr. John Quinn started the Alpha-Kappa-Omega chapter on Salve Regina’s campus in 2003. Since that time, more than 130 history majors have been inducted. To be eligible, students must be senior History majors in good standing and be in the top one third of the University’s senior class.