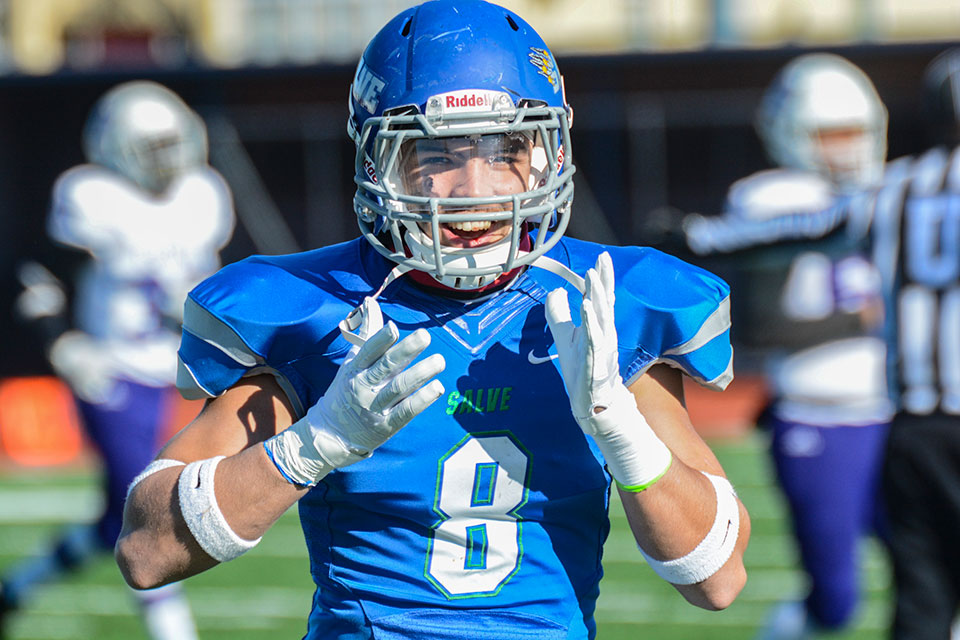 Salve Regina’s Matt Sylvia ’21, a defensive back on the football team, was recently honored by the Providence Gridiron Club with their prestigious Pride of Rhode Island and the Home State Hero Awards.

Both of these awards are given to graduates of Rhode Island Interscholastic League football programs who represent their family, school community and state in a positive manner as they play out-of-state and in-state.

“This award meant so much to me because when I was at East Greenwich high school there was such a small number of guys that you heard of from Rhode Island, and even less from East Greenwich playing at the next level,” said Sylvia. “Being from such an over-looked state, to be playing football in college at all has been and continues to be a tremendous honor.”

Sylvia just graduated from Salve Regina in May with a degree in accounting, although he may return to the University for graduate work in fall 2021. He only saw the field three times in his 2017 debut freshman campaign, but he more than made up for it his sophomore season — where he registered eight interceptions and lead the country for most of the season to finish in second place. He followed up his junior year with 48 tackles and just two interceptions because teams chose not to throw his way. Sylvia was expecting an even bigger senior season before the pandemic halted fall competitions.

For his efforts during his college career, Sylvia has been rewarded with a host of post-season trophies. He was named Defensive Player of the Week two times in the Commonwealth Coast Conference (CCC). He was also picked to the first team All-CCC defensive squad and the New England Football Writer’s All-New England defensive team. His final selection was for third team All-East as a sophomore.

“It’s always great when local players get to come to Salve and succeed, and to say Matt has succeeded is a serious understatement,” said Kevin Gilmartin, head coach for Salve Regina’s football team. “We knew from the beginning that he was going to be a tremendous impact for Salve football, and he definitely has lived up to that prediction.”