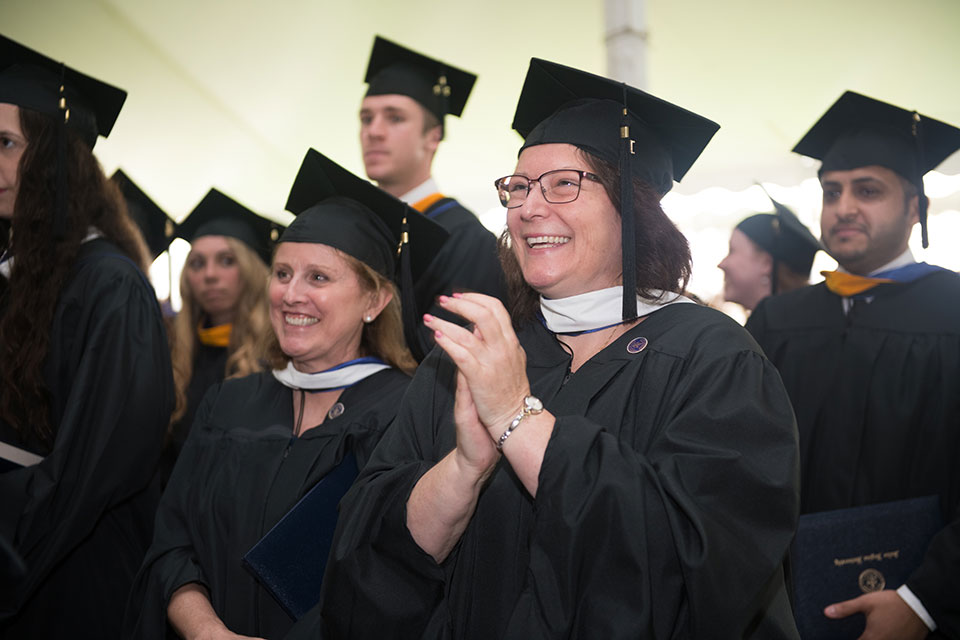 President Jane Gerety, RSM will award 263 degrees when Salve Regina celebrates its graduate Commencement Thursday, May 16, including 69 Master of Arts degrees, 80 Master of Business Administration degrees, 100 Master of Science degrees, 12 Doctor of Philosophy degrees and two Doctor of Nursing Practice degrees. The ceremony will begin at 3 p.m. on the oceanside lawn of McAuley Hall.

U.S. Army veteran Adam DeCiccio, a regional manager at Veterans Inc. in Pawtucket, will receive a master’s degree in rehabilitation counseling and will serve as keynote speaker. “I joined the U.S. Army infantry when I was 17 on Sept. 7, 2001; four days later the world changed forever,” DeCiccio said. “Over the next six years I was deployed to Afghanistan and Iraq fighting for our country. It was my job to be on the front lines and, most of all, to keep everyone safe around me so we all got back home. This was my mission.”

After his years spent in combat, DeCiccio said he struggled in his transition back into civilian life, something he shares with many veterans. “I sought help at the VA hospital and began searching for something that would fill the void and that gave my life meaning,” he said. “I began my post-military life by helping newer veterans navigate the VA system. My VA counselor recommended that I consider helping veterans as a career and pursue a master’s degree in mental health counseling.”

With his degree, DeCiccio has sharpened his new mission: to improve access to housing, mental health and employment services for fellow veterans to help create more military and veteran’s specific programs in graduate studies.

Twelve students will receive their Ph.D. in humanities during the ceremony. Cultivating expertise in traditional humanities fields and building skills as contemporary interdisciplinary scholars, these students pursued research that makes a difference; bridging disciplines and exploring questions of human meaning in a dynamic study of the past, present and future.

The candidates and their dissertation titles are:

Salve Regina also will award its first Doctor of Nursing Practice degrees. The University established the practice-based program in 2014 to develop leaders in the industry who are able to advance quality care while navigating complex and evolving health care systems.