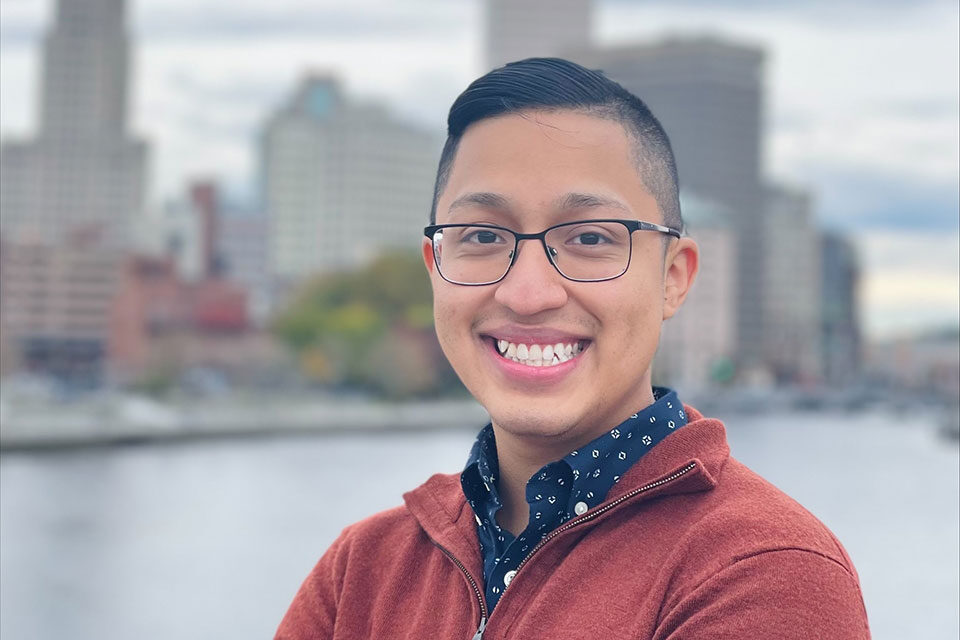 Gilberto Grave ’23, a health care administration major with a minor in health services, has worked to serve and advocate for others from a young age. He has since brought that tenacity to the University’s campus, as well as into the health care profession, where he has taken on roles of service and advocacy in a variety of ways.

From Boy Scout to social justice advocate within health care

Grave believes that his upbringing plays a key role in his current interests. It is no surprise that Grave found a love for community outreach, as he was heavily involved in the Boy Scouts by age ten.

“I was not thrown into service. I dove into it,” he explained.

This dedication to service influenced his path to want to be a health care professional. As a senior in high school, he interned at Rhode Island Hospital as a radiology tech, and he found that his satisfaction came from helping individuals.

Grave’s interest goes beyond just health care, though, and into social justice concerns around health care. Growing up in Providence, Rhode Island, Grave also saw first-hand the way that the health care industry affected urban areas. Many did not have access to adequate care or were targeted due to their economic standing, grasp of English or documentation status.

Being an adolescent witnessing firsthand the inequities that exist in health care, Grave has felt propelled to help others and instill change in the industry.

“I want to be on committees and boards that push for just, equal health care opportunities for everyone, no matter your language or income level,” he said. “It’s a complicated topic, but I think there are things that can be done to push for people in communities like Providence to get health care.”

For nearly two years, Grave has also been working in Rhode Island Hospital, where he is building experience in the health care field. He has already been able to carry over the lessons he has learned in his classes right into the hospital, and this hands-on experience has not only taught Grave what it means to be managed within the industry, but also what managing techniques he wants to possess as he progresses in the field. 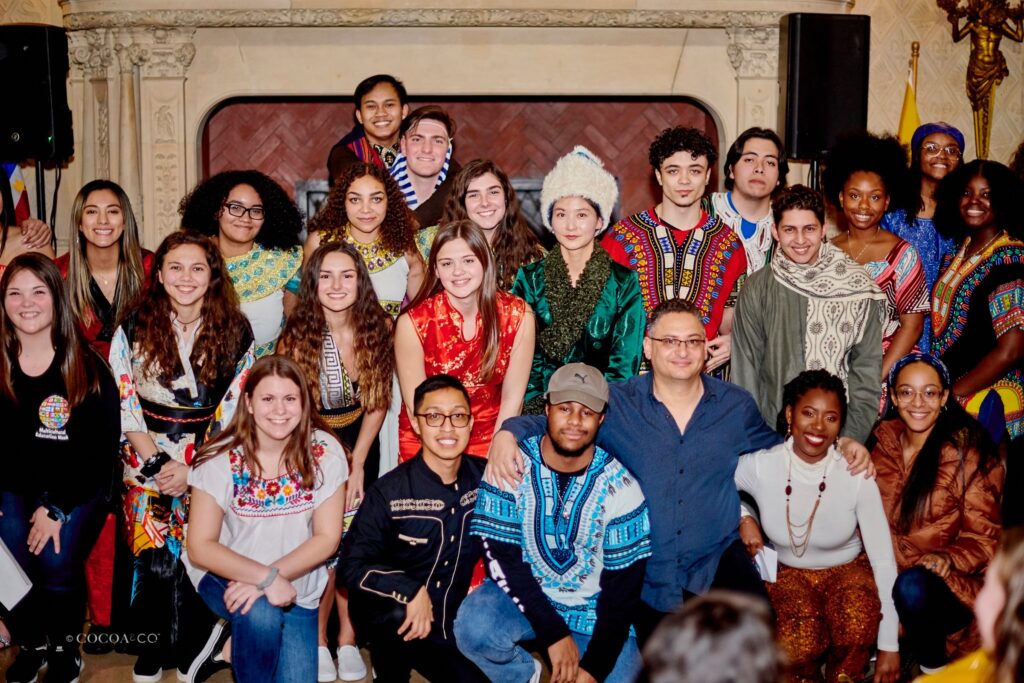 Gilberto Grave ’23 has been part of the Multicultural Festivals that are held on Salve Regina’s campus every semester during Multicultural Education Week.

Besides running rounds in the hospital halls and attending classes, Grave is welcoming and mentoring first-years as a first-year transition (FYT) peer mentor. He finds that being a peer mentor keeps him making smart decisions on campus as a student by practicing what he preaches and leading by example.

Grave has also found that being a mentor means he can foster one-on-one connections with first-years during a time where his guidance and experience can make their transition to Salve Regina easier.

“It’s really rewarding knowing that I can do something, plan it and then it’s going to help someone take something off their plate,” he said.

Grave also takes the role of creating a more diverse environment at Salve Regina seriously. He has been a member of the Black Student Union (BSU), worked in the Office of Multicultural Programs and Retention, and been part of the Hispanic and Latinx Student Organization. He sees a necessity on campus to speak openly about race and to have productive, educational discussions despite the discomfort some people find in the topic.

As a predominantly white institution, he said he understands the hesitation many at Salve Regina might have to join these organizations, but he emphasizes that they are not just about the color of one’s skin.

“I’m not black, I don’t identify as black,” he said. “But attending [BSU] meetings last semester was interesting. They open up me up to perspectives that I don’t experience—and even though I’m a minority, I don’t experience some of the issues that other people of color do.”

As to the Hispanic and Latinx Student Organization, which is a newer club at Salve Regina, Grave loves that the group is both fun and informative.

“We’re not just about having fun, but also learning about the issues surrounding the Hispanic/Latinx community,” he said. “But the biggest thing is just this: You don’t have to identify with the demographic of the group to be a part of these clubs.”

Envisioning a future after Salve Regina

Grave has put hours of work into creating an environment for others to thrive. Whether in the medical field during the strenuous measures of COVID-19, aiding first-years in need of advice, or making a more diverse and aware campus, Grave has big plans to carry on caring for his community.

As to the future, Grave is currently considering pursuing Salve Regina’s 5-year master’s plan to earn his master’s in health care administration. He is hoping to become an MRI technologist, as well as hopefully be a manager in that field someday.

“I just want to help people,” he concluded. 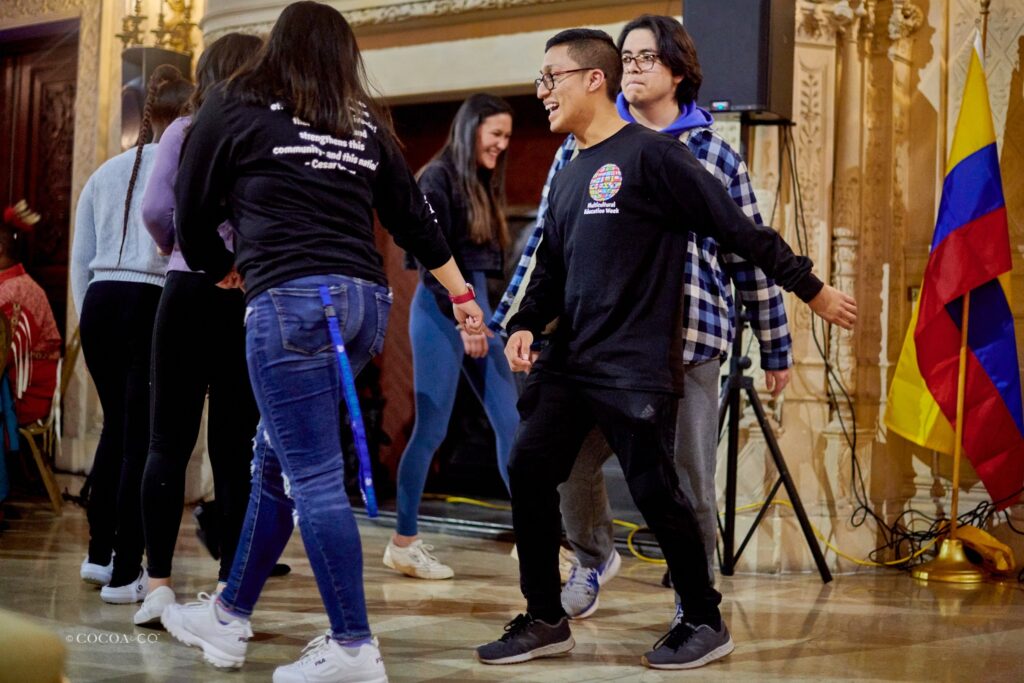