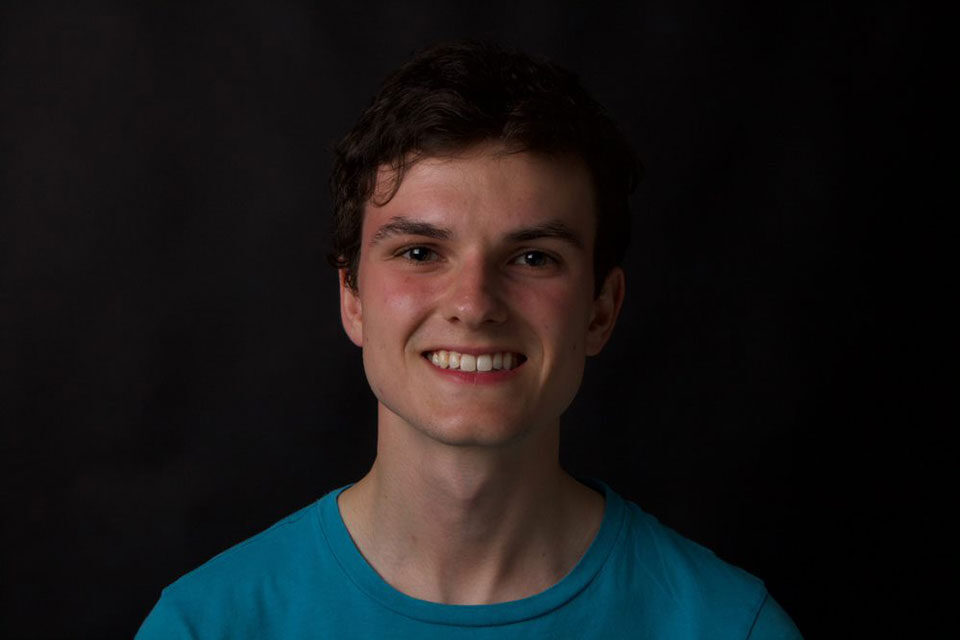 It seems as though everyone knows Ryan Miech ’21, a major in studio art with a triple concentration in graphic design, illustration and interactive media art.

With a quiet but large presence on campus, Miech has formed many meaningful relationships and connections that he holds deep to his heart while attending Salve Regina. And those connections have led him to valuable and unique pursuits — such as community service and the creation of an actual board game during his time here.

Finding home through service and community at Salve Regina

A small school that was close to family with a good art program: Miech knew exactly what type of college he wanted to attend — and after high school, Salve Regina became his home away from home.

And a home is how he treats it! Miech initially began to connect with other students like him and with his new Salve Regina community through extensive community service.

“I ended up choosing Salve because of the location and also some of the opportunities I got right away with Service Plunge ,which is a volunteer for new students in the summer before everyone comes,” Miech explained. “That was an interest to me, and it really left a positive mark on me.”

As a former service advocate, member of the Mercy in Motion leadership team and Sigma Phi Sigma honor society, Miech selflessly takes care of everyone around him. 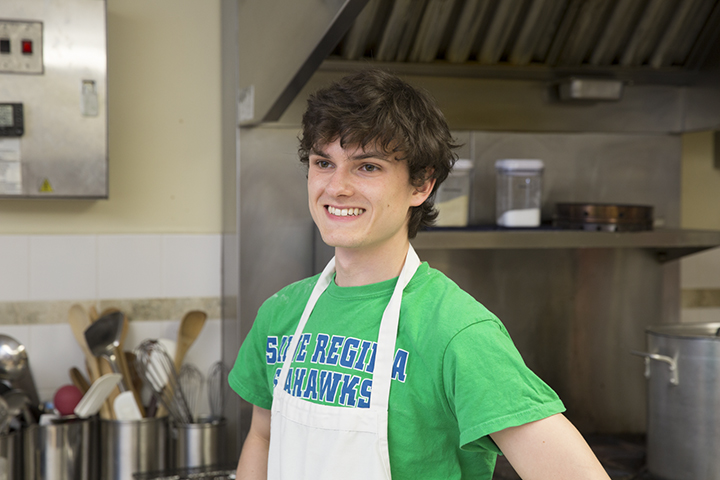 Miech is working at a soup kitchen. Miech has loved to serve during his time at Salve Regina. 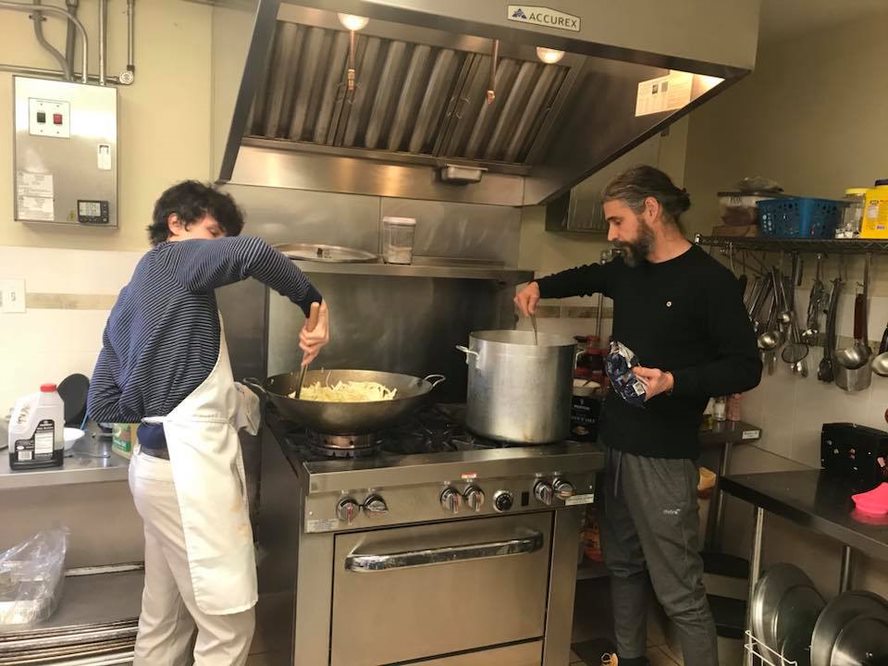 Creating an entire board game, connecting to larger life questions

A year ago, Miech added something new to his already packed schedule that he continues to fully commit to in his typical passionate fashion. In one of Miech’s classes junior year, the purpose of the class was for each student to make one body of artwork where every piece connected with each other. Having been involved in board game design in high school Miech envisioned merging that skill with the idea of making a body of artwork.

“It is a crazy idea, and it is a lot of work, but I want to make a board game that spans 60 pieces of artwork that compiles a lot of themes,” said Miech. He pitched the idea to his professor, and it took off from there.

After completing the assignment for class, Miech decided to revisit the game over the summer of 2020 and has since been working to perfect it.

Miech explained that the beginning process of creating the game was extensive research and establishment of themes. The themes include dreaming, the choices people make, storytelling mythology, fatalism and freewill. Miech created all of his own artwork for the game, and he used chalk pastels. 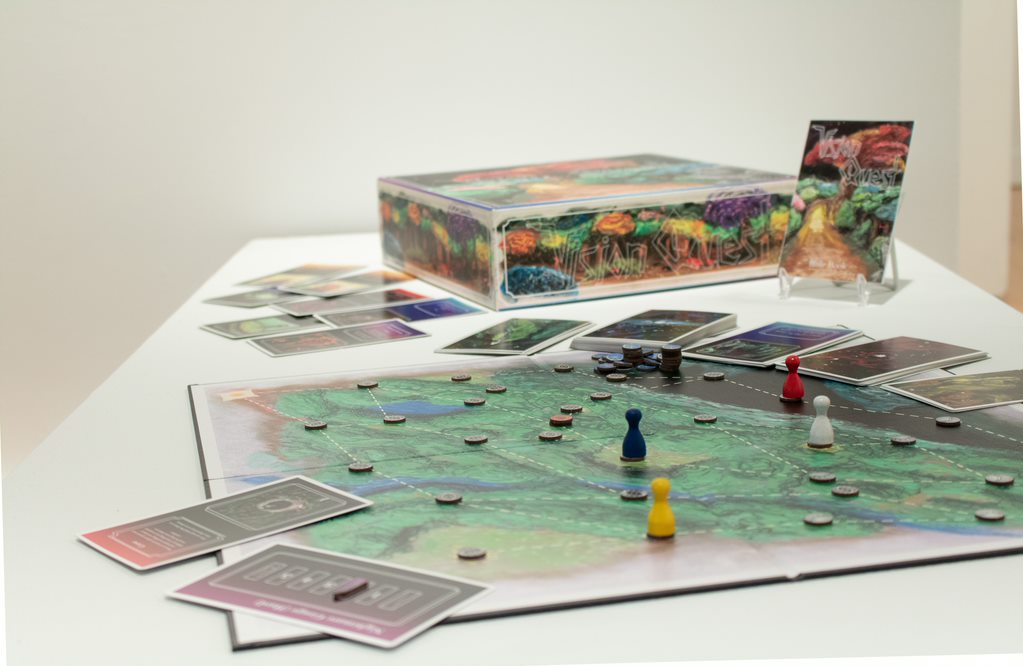 Miech created an entire board game for an art project in one of his classes.

“One of my rules for myself is that I use no photos and no references to kind of preserve the theme of dreaming,” said Miech. “The players are trapped in a forest, and the goal is to explore it and either get knowledge from spirits and other creatures, then leave the forest. Or if they stay and are too greedy, the forest will collapse on them. So there is a balance between greediness and risk and reward.”

The game clearly consists of values that Miech holds close to him, and it is fascinating how each piece of his artwork connects to another — but also how they connect to the greater meaning of life.

At the end of the fall semester, Miech is going to start a Kickstarter campaign for the game with hopes of bringing it into the hands of others.

What makes Miech so special is his outlook on making genuine human connections and learning from other people.

“I really enjoy being around authentic people,” stated Miech on interactions with others. “Even if they are struggling with their self identity in some way, they are really open about who they are and what they believe …. Personal honesty is really important for getting close to people and making intimate important relationships.”

It is no doubt that Miech has an unshakeable work ethic, but it didn’t come from nowhere. “My grandpa is one of my biggest heroes, and he installed in me the ability to work hard and push myself and I am thankful for that.” Miech will forever treasure the valuable lessons about hard work he learned from his grandfather and the world will continue to see the outcome.

When asked what he is most proud of from his time at Salve Regina, Miech said, “The connections I have made with the people I met here. I met a lot of people who I want to stay in contact with for a long, long time. It has positively changed my life, and I hope I positively change theirs.”

As one can see, there’s a reason Miech has become such a familiar face around campus, because positive connections truly are what Miech is all about. He found those at Salve Regina.