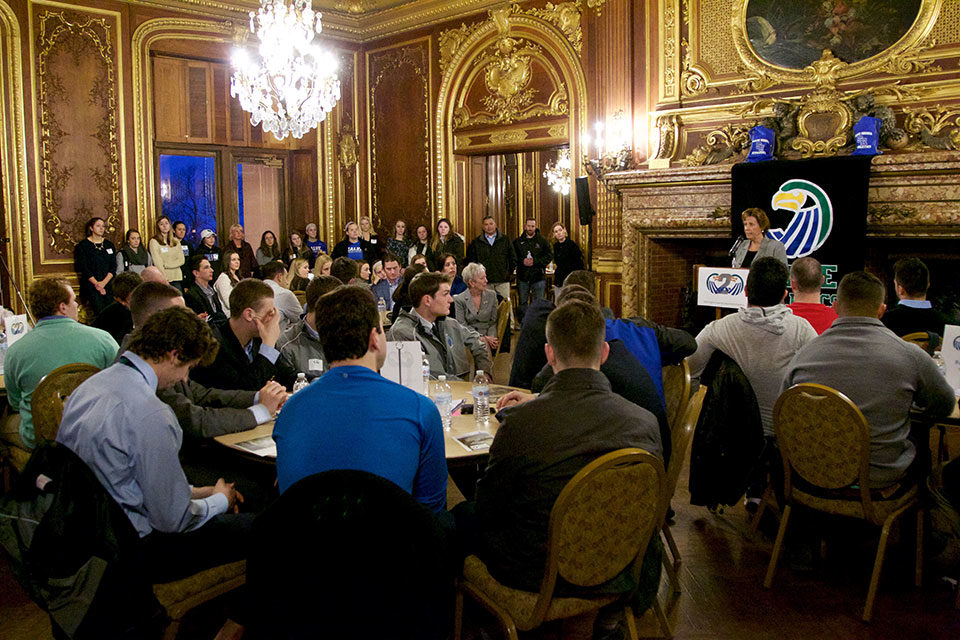 Current and former Seahawks will gather together at the 4th annual Seahawk2Seahawk event on Monday, March 2, at 6 p.m in Ochre Court. Junior, senior or alumni student athletes who are interested in professional development and networking are invited to attend.

Seahawk2Seahawk is a mentoring night that consists of speakers and roundtable discussions that are hosted by alumni mentors who were also student athletes during their time at Salve Regina. The night is an opportunity for current Seahawks to connect with alumni mentors to learn about different career paths, obtain advice for life after college and connect for possible internships or careers.

“We really do believe in whole person growth and student formation,” said Jody Mooradian, director of athletics. “In the long range, the more we support them, the more we include them and help them grow, they’ll never leave us. So we really are able to encourage their whole cycle of growth here at Salve.” 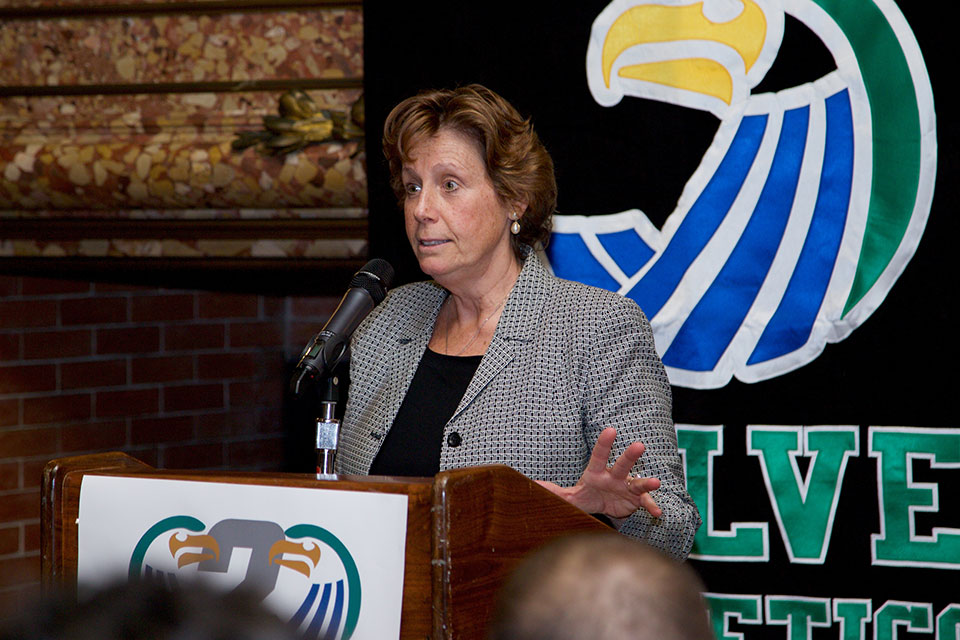 Seahawk2Seahawk always opens up with a speaker, and this year it will be Chuck Paiva, president of International Marine Industries, Inc. (IMI) and president and general manager of the Newport Gulls collegiate baseball team. Paiva was also an assistant coach at Salve Regina in the 1990s. Paiva’s expertise and knowledge are the foundation of the long-term relationships IMI has established with leading companies in the seafood industry, and he will bring invaluable insight into building successful career relationships for younger Seahawks.

Other Seahawk alumni will be mentors at about 10 different roundtables sharing their stories around their professional expertise, and students will be able to rotate to the various tables to listen to advice, ask questions and network. Fields like real estate, mental health, sales, physical therapy, and forensic science are just a few of the careers and topics that will be hosted by mentors in these fields during the roundtable discussions.

“It’s nice that it’s somewhat informal, but it’s also professional,” said Matt Finlayson ’08, who was a Seahawk himself, has mentored at previous Seahawk2Seahawk events and is currently an assistant athletic director at Salve Regina. “So as a mentor, you talk about your path, what you found to help you along the way, any advice or guidance that you might be able to provide to someone who was in your shoes. And usually you give the student athletes your business card, and people might follow up with you.” 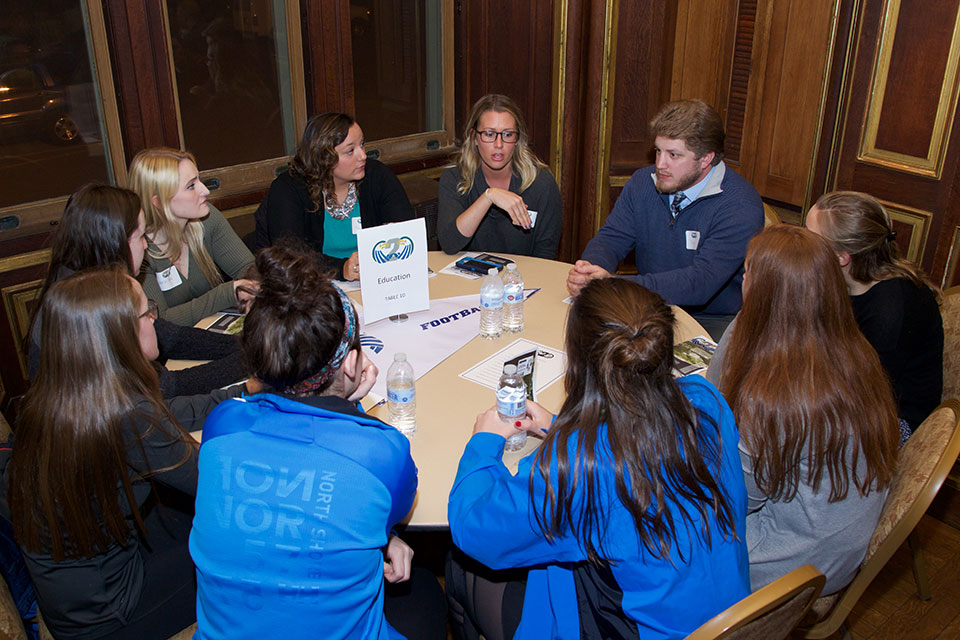 Ryan Kelly ’16, ’18 (MBA) was a baseball player at Salve Regina that attended Seahawk2Seahawk in 2018 and can personally testify to the benefits the event has to offer for students and alumni. During the 2018 Seahawk2Seahawk event, he was able to connect with a mentor named Dan Kehew ’13, ’16 (M), who had been a senior when Kelly was a freshman. After connecting with Kehew at the event, Kelly was able to land a job interview and subsequent job at OneSpan, a cyber security technology company, as a security sales consultant.

Kelly was also a mentor at last year’s Seahawk2Seahawk event, which he enjoyed a lot. He is glad there are opportunities to give back and remain connected to Salve Regina’s athletics department even after graduation. Oftentimes, students don’t realize how being an athlete can be leveraged as such a positive during interviews, according to Kelly.

“If they played a sport, they usually have a good work ethic, and they can balance multiple schedules, different hats,” said Kelly. “That’s one thing I preach to the students—just because you don’t have the best internship like kids may have in an interview, you can go ahead and say, ‘I was doing an internship in the fall while doing soccer, football and going to class.’ So showing time management.” 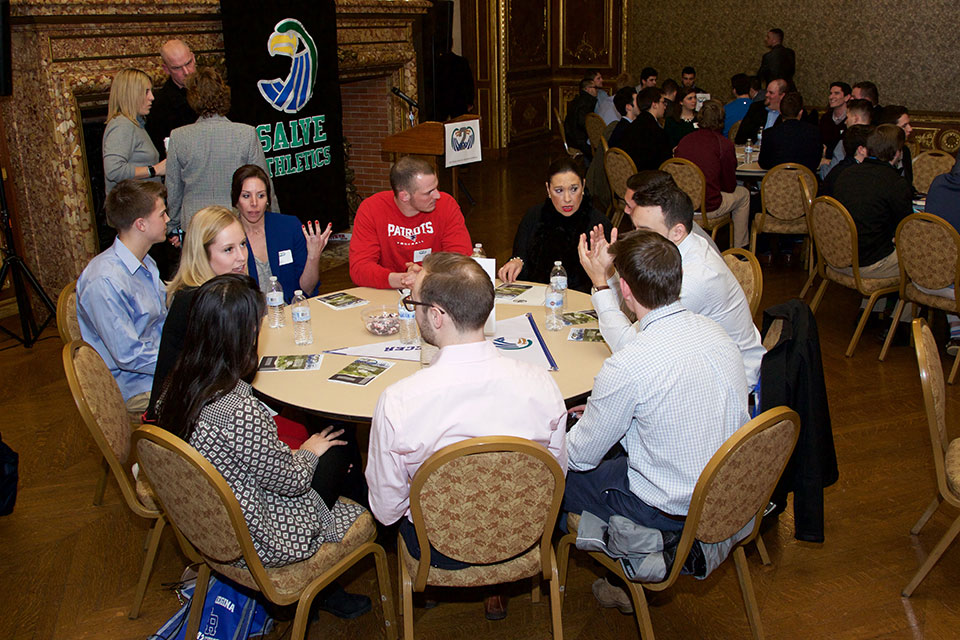 As the event happens each year, it will continue to spark a network of growing Salve Regina athletes who remain lifelong supporters of each other, according to Mooradian.

“Our role isn’t just athletics. We really like to let them grow as whole people,” Mooradian said. “We think it goes hand in hand. The more you care, the better they do.”

For more information about the Seahawk2Seahawk mentoring evening, contact Matt Finlayson at (401) 341-2247 or matthew.finlayson@salve.edu.