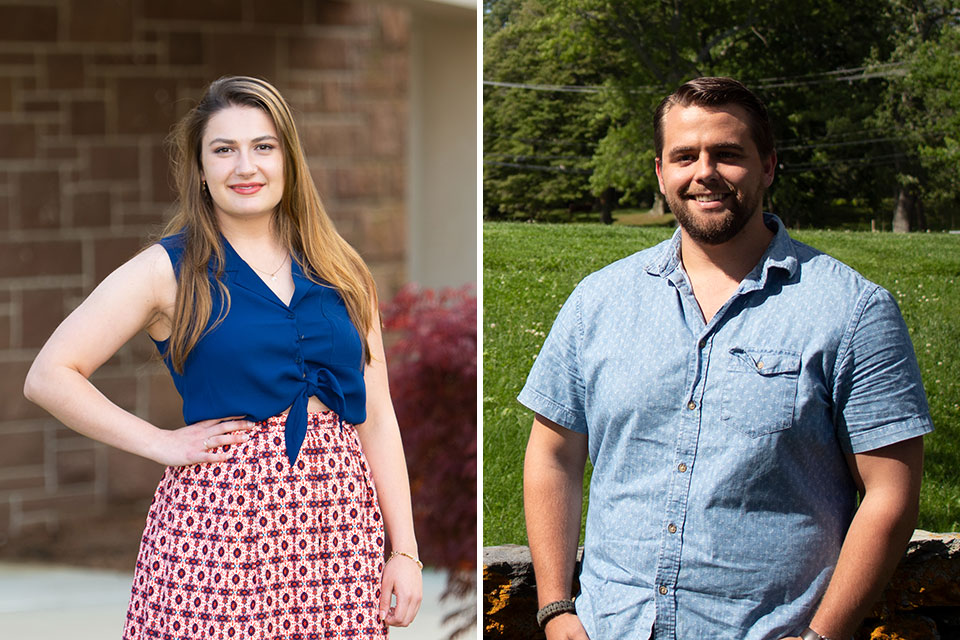 A recent Salve Regina alumna and a current graduate student have both been awarded prestigious Boren Fellowships to fund their year-long overseas immersion studies in Arabic language and culture during the 2019-2020 academic year.

Alexis Smith ’18, ’19 (M) will use her $24,000 award to fund a year of study at Sijal Institute for Arabic Language and Culture in Amman, Jordan. Andrew Loftenses, who is enrolled in the master’s degree program in international relations, will use his award to study Arabic at the Lirom Language Center in Jerusalem and with the Druze community in Mt. Caramel near Haifa, Israel.

Smith works as a contractor for Rite-Solutions, Inc. as a cyber analyst at the Naval Undersea Warfare Center in Newport, and is also a military intelligence officer in the U.S. Army Reserve’s Military Intelligence Battalion in Fort Devens, Massachusetts. In May, she was awarded an M.S. in administration of justice and homeland security with concentrations in cybersecurity, intelligence and digital forensics, and also earned a B.A. in administration of justice and global studies from Salve in 2018.

“As an undergraduate, I had the opportunity to study abroad in Seville, Spain, which exposed me to a foreign language and culture and allowed me to increase my Spanish language skills to the advanced level.” Smith said. “When I returned from Spain, I had another opportunity to study accelerated Arabic through Project Global Officer at the University of Arizona during the summer. This cumulative year and a half of cultural and lingual immersion not only increased my cultural and lingual knowledge and gave me lifelong friends, but also broadened my perspective on international issues, gave me the opportunity to see multiple different countries and left me with the ultimate goal of becoming fluent in both Arabic and Spanish.”

Smith learned about the Boren Fellowship while researching immersion opportunities available through the Fulbright program. “At first, I was interested in applying to the Fulbright program in order to expand my Arabic language capabilities as well as immerse myself fully into a different culture,” she said. “However, the Boren Fellowship, an award focused on language and cultural immersion for students with a commitment to national security, was a perfect fit for me as I already work in the national security sector and intend to have a lengthy career in national security.

“When I learned that I had won the Boren Fellowship, I was incredibly excited to have the opportunity to fully immerse myself into the Arabic language and culture,” Smith added. “I truly believe that language learning is contingent on cultural learning as well. You cannot fully learn a language from a book because you lack the knowledge of the cultural nuances intertwined into the language. Because of this, I cannot wait to land in Jordan and absorb all of the culture and language that I can while living there.”

Prior to enrolling in Salve’s graduate program in international relations, Loftenses earned a bachelor’s degree from Saint Mary’s University of Minnesota, after which he joined the U.S. Marine Corps., serving in Washington, D.C. before deploying to Jordan, Kuwait and Iraq.

His first formal introduction to the study of Arabic came during a pre-deployment course for Marines at San Diego State University. He applied what he learned and continued his studies during his deployment to Iraq, where he practiced Arabic on a daily basis with Iraqi soldiers and civilians.

“During this real-world immersion, I practiced speaking in both casual settings over morning tea, as well as during professional security situations,” Loftenses said. “It was during this time that I saw firsthand how much the Iraqis appreciated my attempts to learn their language while in their country, and the doors of hospitality which that opened up. I am eagerly seeking a return to that fully immersive Arabic experience.”

Under the six-month fellowship, Loftenses will travel first to Jerusalem and then to Haifa, Israel. His goal is to master the Arabic language, of which he has a basic understanding from his deployment. While in Jerusalem, he will study with a tutor. “I’m going to tell him, ‘let’s go out on the streets and walk around.’ That’s how I want to learn, by interacting with people. I want to get out and talk to the locals and be out of my comfort zone,” he said. During his time in Haifa, he will stay with a host family selected by Boren, and will have the opportunity to volunteer in the community.

“The success in international relations are the human relationships,” Loftenses said. “I saw this in Iraq, and it will be important to national security. Completing a period of study in Jerusalem and the Druze community of Mt. Caramel will equip me with invaluable Arabic language skills and cultural exposure. I will use this knowledge to influence effective national security policy for the United States through the duration of what I intend to be a long career in national security at the forward point of friction.”

After completing his immersion studies through Boren and completing his graduate degree at Salve, Loftenses plans to return to the United States to continue Arabic lessons via Live Lingua, and to ultimately pursue a career in national security. He is hoping to live in Washington, D.C. to work with the Department of State, and to further his Arabic studies at the Sultan Qaboos Cultural Center.

The David L. Boren Scholarships and Fellowships are sponsored by the National Security Education Program, a major federal initiative designed to build a broader and more qualified pool of U.S. citizens with foreign language and international skills. The award is intended to fully fund the year of intensive language study abroad. In exchange for funding, Boren award recipients agree to work in the federal government for a period of at least one year.