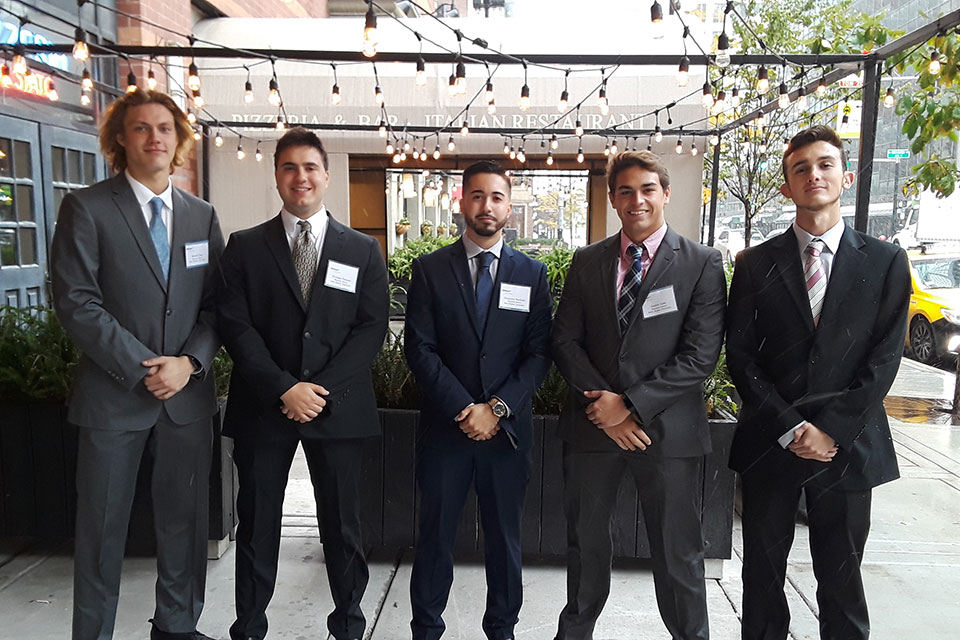 “We went in looking for a networking opportunity,” said Thomas DeNault ’20, a business administration major. “We weren’t really expecting too much being that Salve’s a small school and it was our first year. We got there and were honestly just so excited to be meeting everyone.”

But as DeNault and his partners, which included club founder and president Dionysios Skaliotis ’20, along with Garret Aube ’22, Merrek Page ’23 and Nicholas Ranucci ’20, talked to more and more students from more and more schools, their excitement – and their expectations – started to build.

“We realized we might actually have a real shot of winning this thing,” DeNault said. “We put in a lot more work than a lot of these bigger schools. And when they called our names our jaws hit the floor; we were all in disbelief.”

Their second place finish in the nationwide competition put them behind first place Southern Utah University and ahead of third place Hofstra University. “Probably one of the proudest moments in my college career so far was being there with those guys and being on a big stage like that,” DeNault said.

The portfolio building competition, an exercise of fundamental analysis on building a long-term investing strategy, asked each team of 3-5 students to create a paper trading portfolio with $1 million invested in stocks and ETFs on the sponsor company Voleo’s web app. Students selected up to 10 stocks and wrote a 4-6-page paper (including exhibits) explaining their logic and rationale. The portfolios were judged by members of the CFA Society Chicago.

Having competed in the conference, Salve’s team is automatically entered into Part II of the Voleo Student Competition, where they will compete again with students from across the country over the course of three months, actively managing and rebalancing their portfolio with winners to be judged on the basis of total returns.

The Options Trading Club, which was started last March by Skaliotis and DeNault, recently held its first club rush, which attracted about 50 members. “If there’s something you want to do, Salve is a great place to be able to do it,” DeNault said of the club’s rapid climb to success. “Having advisors like Sam Sacco and Bonnie Kennedy to help us build clubs like the Options Trading Club or anything you’re interested in is invaluable.”

Options Trading Club: Open to all members of the Salve community, the organization’s focus is to teach members about the basics of options trading, developing a strategy, and performing an ongoing paper trading simulation. The simulation allows members to see trends in their trades and develop their own strategies. Group seminars are implemented to discuss various companies, what is occurring in the market, and different stocks to be paying attention to.