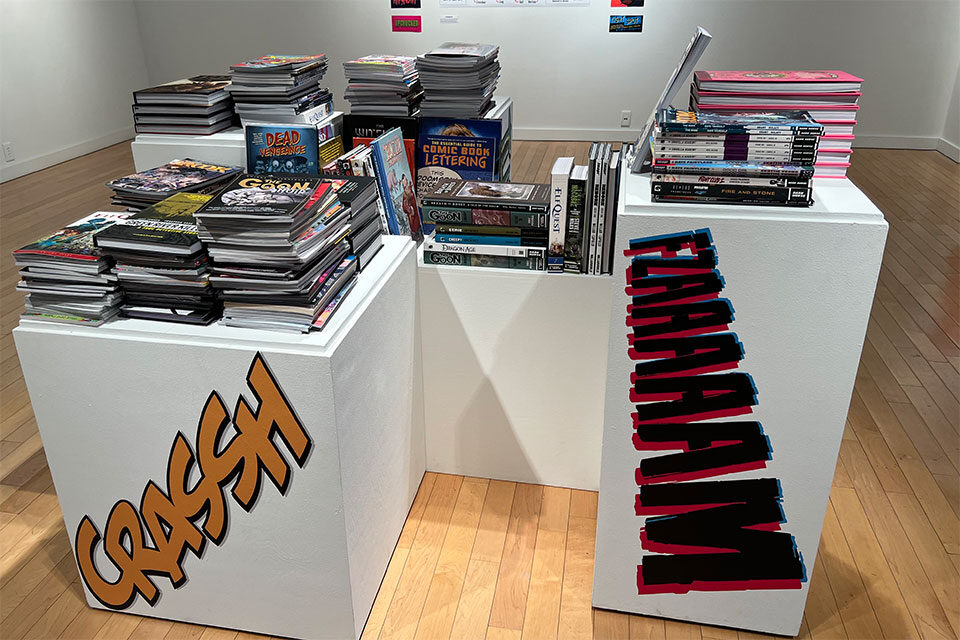 The Department of Art and Art History is pleased to host its latest exhibition in the Dorrance H. Hamilton Gallery, which is entitled “Nate Piekos: The Essential Guide to Comic Book Lettering.” The exhibit will be open to the public from Thursday, Jan. 20 through Thursday, Feb. 3. On Thursday, Jan. 20, the campus community and the general public are invited to attend a gallery reception for the artist. This reception will run from 5-7 p.m. in the Hamilton Gallery, and masks are required to attend.

From the early days of T-squares and ink pens to the digital age of pixels and tablets, comic book letterers have breathed life into the text elements and graphic design work of everyone’s favorite comic books. “Nate Piekos: The Essential Guide to Comic Book Lettering” will take a look behind the curtain at the way word balloons, cover logos and sound effects are crafted to guide the reader’s experience of comics. 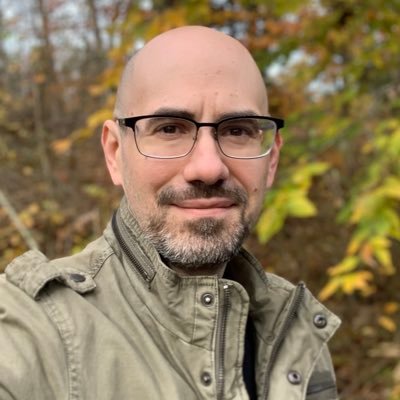 A Rhode Island native, Piekos has been a celebrated letterer in the comic book industry ever since his first project with Marvel Comics over twenty years ago. He’s worked on popular titles like “Green Arrow,” “The Umbrella Academy,” “Fight Club 2,” “Middlewest” and many others.

“As a lifelong comic book fan, I combined my love of comics with typography,” described Piekos of his journey into the comic book lettering world after graduating college in 1998. “I would spend nights on my hobby while working a corporate design job by day. By the time I was 28, I was receiving enough comic book work to quit my day job …. It was probably one of the scariest and most uncertain times in my career, but luckily, it all panned out. I’ve been a successfully self-employed graphic designer in the comics industry ever since.”

Piekos is also the creator of one of the industry’s most popular font websites, Blambot.com, and he has designed logos for the X-Men and Charles Schulz’s Peanuts. Piekos continues to work on high-profile projects for virtually every major publisher in the comic book industry, including Marvel Comics, DC Comics, Dark Horse Comics and Image Comics.

“Nate Piekos: The Essential Guide to Comic Book Lettering” is the first exhibition of its kind to focus on the design and lettering process behind comic books, and it features work from Piekos’ recently released and critically-acclaimed book of the same name. In addition, a large collection of graphic novels that feature Piekos’ lettering and graphic work will be available in the gallery for visitors to enjoy firsthand. 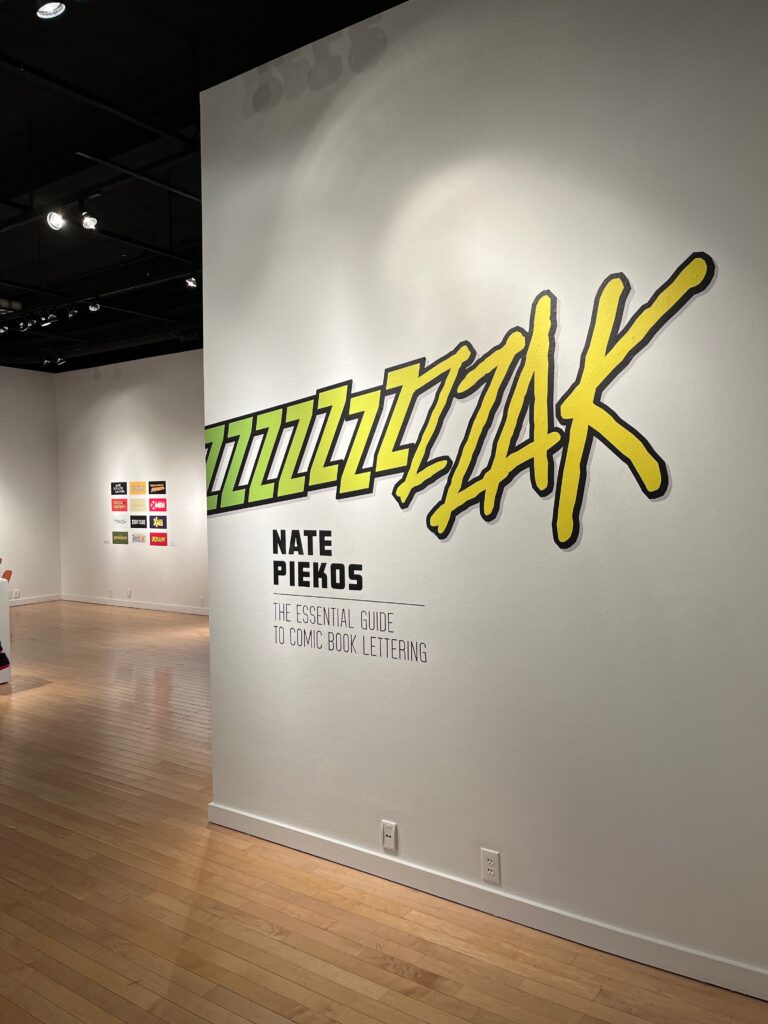 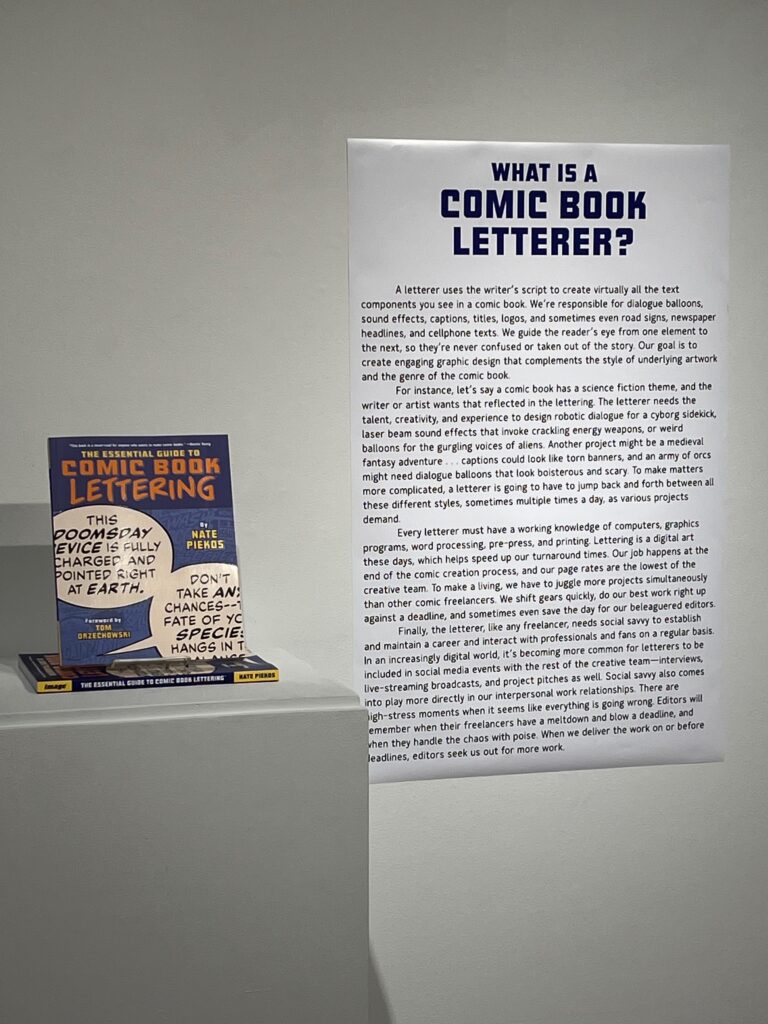 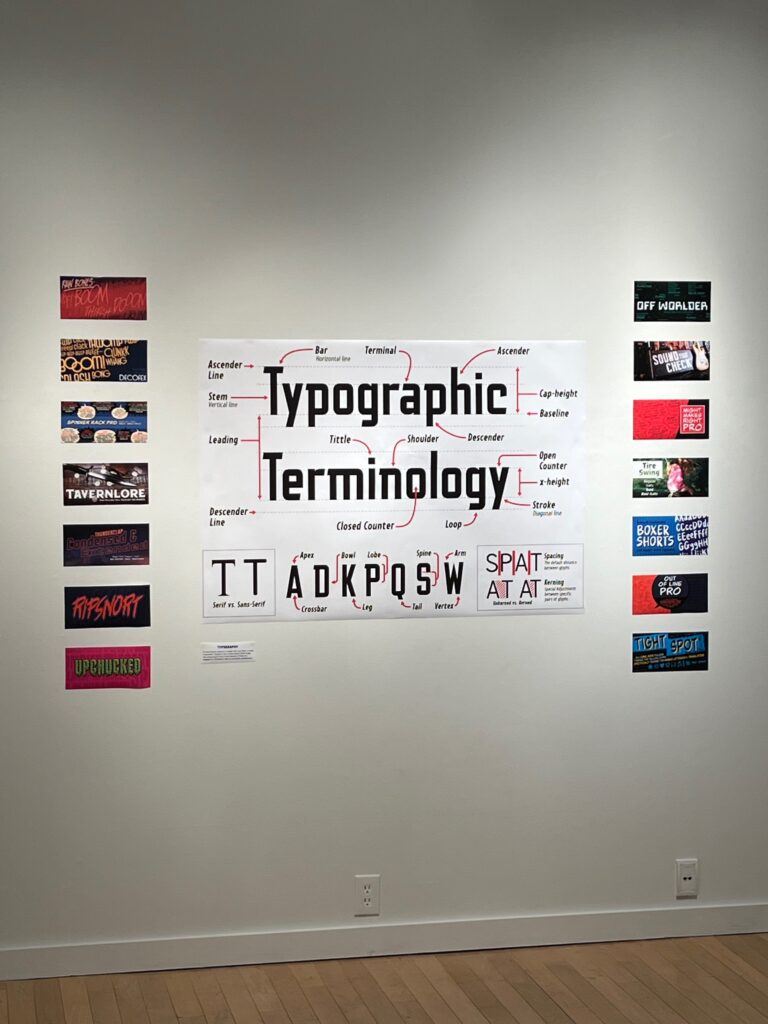 “I’d like to educate people about what actually goes into designing for comic book publishers,” Piekos described about his hopes for the exhibit. “Even comic book fans often have no idea that there is a huge amount of graphic design skill involved with doing it well. Letterers are responsible for all the text design you encounter in a comic book — from sound effects to cover logos to designing publisher’s marks and more. We’re an often unobtrusive part of the reading experience, but we have a huge impact on that experience.”

“Nate Piekos: The Essential Guide to Comic Book Lettering” will be open to the public from Jan. 20 to Feb. 3. The Dorrance H. Hamilton Gallery is located in the Antone Academic Center on the campus of Salve Regina. It is handicap accessible with parking along Lawrence Avenue and Leroy Avenue. Its exhibits are open Tuesdays and Thursdays from 11 a.m. to 6 p.m.,Wednesdays and Fridays from 11 a.m. to 5 p.m., and Saturdays and Sundays from noon to 4 p.m. The gallery is closed on Mondays. Masks must be worn at all times. 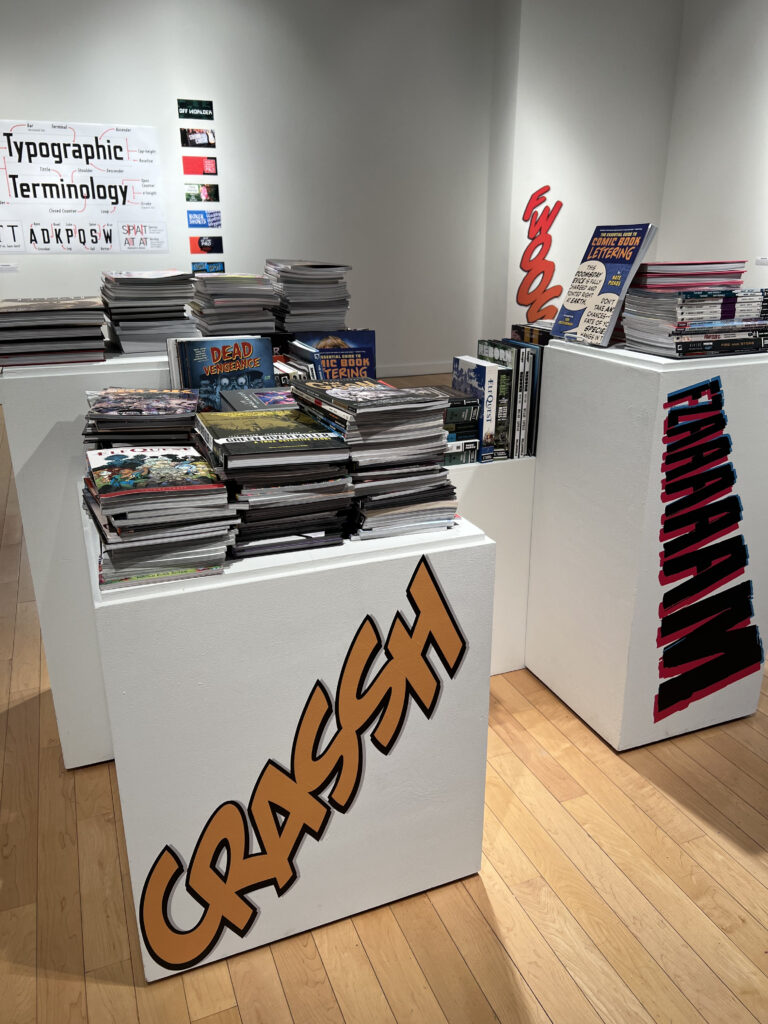