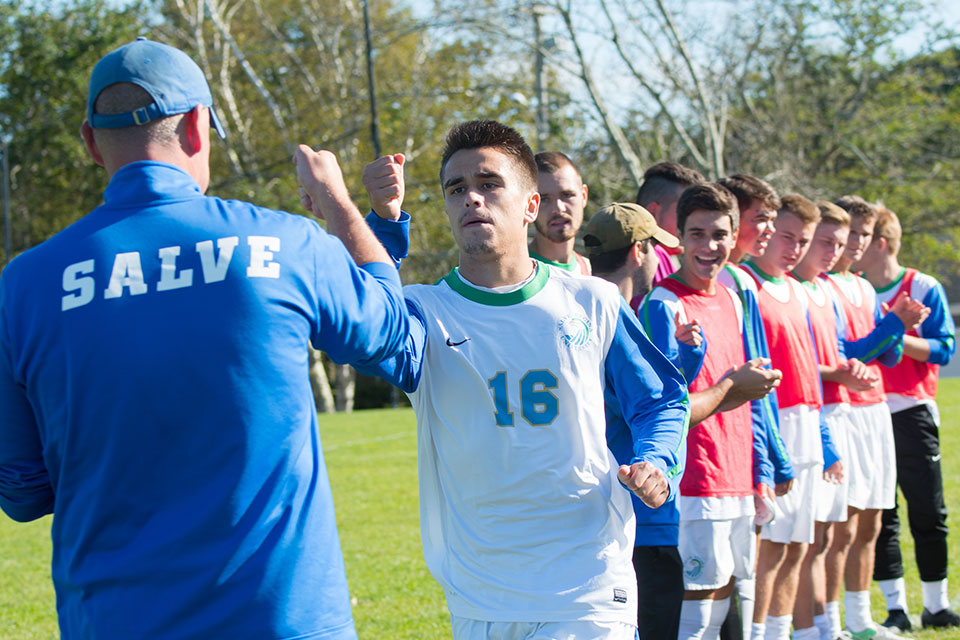 With Salve Regina’s fall sports programs getting underway, SALVEtoday takes a look at the student-athletes who will captain their teams during the 2019 season.

Vanessa Frost ’20 will captain the field hockey team. “Vanessa brings a wealth of experience and dedication,” said head coach Jennifer Foster. “Our staff is confident that our team will be pushed and held accountable with her leading the way.”

Linebacker Drew Balestrieri ’20, defensive lineman Nicholas Poillucci ’20 and offensive lineman Michael Saunders ’20 will captain the football team. “We have a great group of 24 seniors, and every one one of them has stepped up and led the Salve football family, but the team selected three captains that personify the characteristics of what that family is all about,” said head coach Kevin Gilmartin. “Drew, Mike and Nick are great role models on and off the field and I look forward to watching them lead this team into the 2019 campaign.”

Da Cruz has represented the program in three NCAA Division III New England regional championships. “Chandler is a loyal, dedicated teammate,” said head coach Rob McGuinness. “He sets high standards for himself and challenges others to do the same. I am confident that he will set the right tone for our group.”

Lynch was the top runner on the team last fall, posting a personal best for 8K in the conference championship. “Aidan is an excellent distance runner and he is very well versed in running mechanics, form drills and ancillary training,” McGuinness said. “He is always willing to share what he knows to help his teammates improve.”

Casey Kelly ’19, Evan MacDonald ’20 and Noah Medeiros ’20 will captain the men’s soccer team. “Each of these young men has distinguished themselves over their careers at Salve Regina, and epitomizes some aspect of leadership for our program,” said head coach Craig O’Rourke II. “Collectively, these young men will lead our team into what should be another highly competitive season within the Commonwealth Coast Conference.”

Owen earned a spot on the all-conference team last fall with a fourth-place finish in the conference championship and is a former all-New England honoree at 10,000 meters on the track. Sandri has represented the program in major invitationals and serves as the team’s representative on Salve Regina’s Student-Athlete Advisory Committee.

Kayla McLaughlin ’20, Emily Szemreylo ’20 and Katie Szemreylo ’20 will captain the women’s soccer team. McLaughlin and the Szemreylos work the midfield and defensive zones for the Seahawks as they enter their fourth year with the program.

“We have our biggest roster ever, and these three have grown into outstanding leaders on and off the field,” said head coach Jane Walsh.

Shealyn FitzPatrick ’20, Priscilla Gaspard ’20 and Lily Gorman ’20 will captain the women’s tennis team. The trio has a combined eight years of experience on the collegiate hard courts.

“Shealyn, Priscilla and Lily each bring a unique set of strengths that complement each other, and will help lead our 11-member squad in both fall and spring competition,” said head coach Adam Zaccara.

Andee Bender ’21 and Annie Donahue ’20 will captain the women’s volleyball team. “I’m excited about having these two as captains this year and I know they will lead this team well,” said head coach Lauren Parsons. “Annie and Andee will bring a good level of accountability and focus to the team. They are both leaders on and off the court, and even though they have been named captains, it is the responsibility of the entire team to be leaders and good role models.”