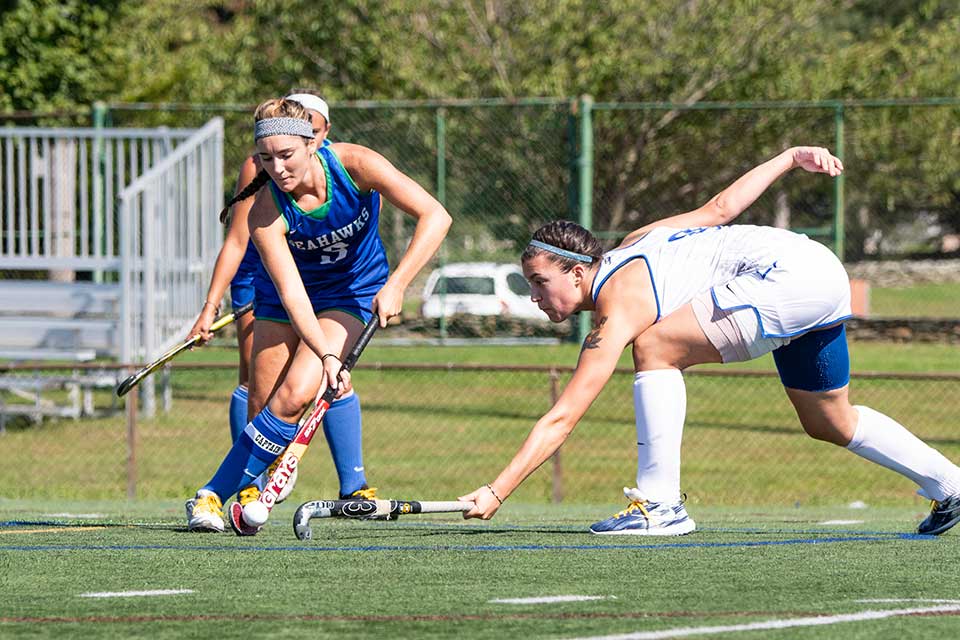 Ashley Cody ’20 was named offensive player of the week after leading the team to two conference wins on the road last week. She had two goals and two assists in a 4-3 win over Nichols College and the game-winning goal in a 2-1 victory over Roger Williams University. Cody continues to lead the league in goals, assists, and points.

With the No. 3 seed in the conference tournament, Salve Regina (12-6, 7-5 CCC) earned a bye to the semifinals and will travel to face No. 2 University of New England on Thursday, Nov. 7.

Angelo DiSanto ’20 was named special teams player of the week after contributing 11 points to Salve Regina’s 53-17 win over the University of New England last Saturday. He converted two of his three field goals from 23 and 30 yards, while also making five extra points. DiSanto also had one 44-yard punt that landed inside the 20.

Salve Regina (3-5, 2-3 CCC) has a two-game win streak heading into its road matchup with Husson University on Saturday, Nov. 9.

Casey Kelly ’21 was named defensive player of the week after leading a unit that carried the Seahawks to a win over conference rival Wentworth Institute of Technology. Salve Regina held Wentworth to a mere three shots on goal in the 4-0 shutout.

Evan MacDonald ’20 was named offensive player of the week after netting a pair of goals against Wentworth, finishing the regular season as the team leader in points with nine goals and 12 assists. Dylan Sock ’23 was named rookie of the week after scoring his first goal of the season in the win.

Salve Regina (13-4-3, 7-0-2 CCC), unbeaten in the regular season the last two years against conference foes, defeated Nichols College 2-1 in the semifinal round of the conference tournament and will host Endicott College at 1 p.m. Saturday, Nov. 9 at Toppa Field in the championship match.