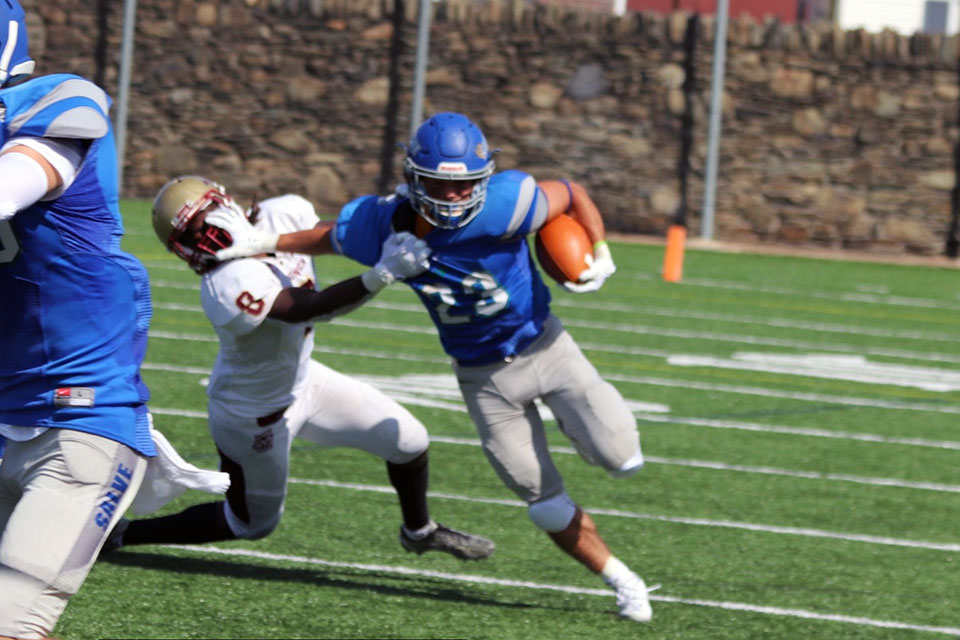 Robert Gomes ’23 was named offensive rookie of the week after producing more than 100 all-purpose yards in Salve Regina’s 62-35 win over Dean College last Saturday. Most of his damage came on the ground, as he averaged 11 yards per carry, rushing for 99 yards, including a 25-yard jaunt on the Seahawks’ first drive of the game. He also had a pair of catches for 21 yards, giving him 120 total yards on the day.

Joey Mauriello ’22 was named offensive player of the week after setting a single-game program record with five touchdowns as Salve Regina defeated Dean College 62-35. He rushed 22 times for 207 yards for a 9.4 yards per carry average. He scored four of his touchdowns in the first half, reaching the end zone twice in the first quarter and two more times in the second.

Salve Regina (1-2) remains on the road this weekend, facing Nichols College on Saturday, Sept. 28 in the first conference game of the season for both squads.

Goalkeeper Seth Wolins ’23 was named defensive player of the week and rookie of the week after the Seahawks went 1-0-1 on the week. He picked up his first shutout of the week at the U.S. Coast Guard Academy, making six saves in the 1-0 victory. He had another six-save performance in the conference opener against Endicott College, playing all 110 minutes in the scoreless draw.

Meagan McLaughlin ’23 was named rookie of the week after scoring a goal in each of the Seahawks’ games, including the game-winning goal against Endicott College. She also had a goal against Bridgewater State University, giving her two goals and four points on the week.