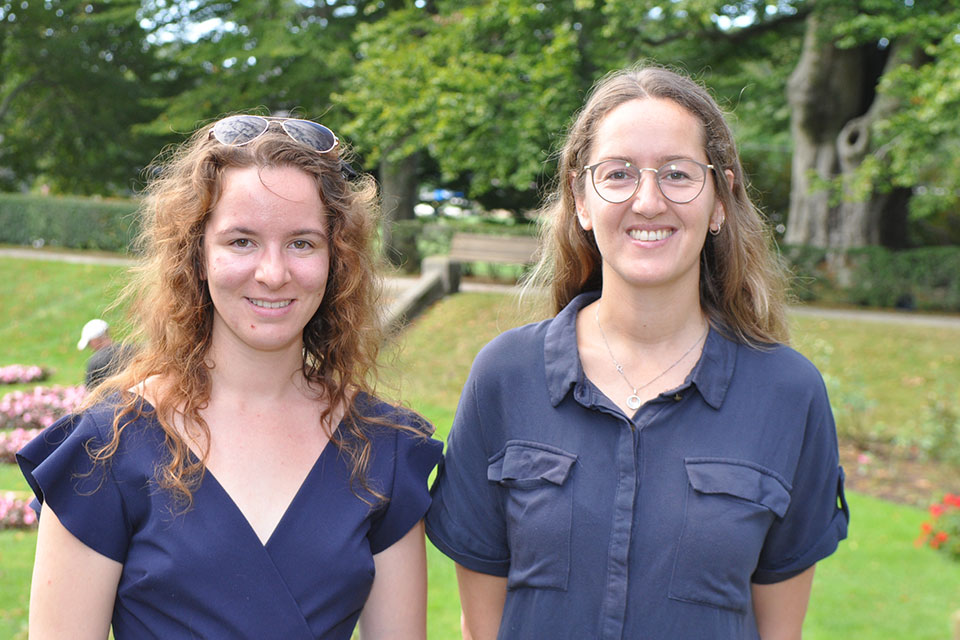 Adeline Bauthamy of France and Dayana Tolosa Zugarramurdi of Uruguay are teaching foreign languages classes, living on campus in the Language House at Carnlough Cottage and taking two courses each semester as Fulbright Foreign Language Teaching Assistant Program recipients for 2019-2020.

In addition to their teaching responsibilities, the two are facilitating weekly conversation tables at the McKillop Library cafe and hosting Language House film nights, dinners and other cultural events. They will also assist faculty and students in delivering language instruction to elementary students in the Newport community once a week during their second semester at Salve Regina.

Bauthamy was born in Nantes, her country’s sixth largest city, and spent most of her childhood in Blain. After earning her bachelor’s degree in Spanish teaching from the University of Nantes, she taught French language for a year in Madrid, Spain through the CIEP program. She returned to France to earn her master’s degree in French teaching at the University of Western Brittany, which is located in the port city of Brest.

“Now, I’m teaching French here and it is just amazing,” she said. Bauthamy first looked into the Fulbright program because her best friend was doing it and was, in fact, hoping to be placed at Salve. “I opened the Salve Regina website and I was, ‘ohhhh I need to be there!’” Bauthamy recalled.

In addition to participating in as many activities as possible while here – including a desire to learn how to surf – Bauthamy hopes to share a deeper appreciation for French culture among the Salve Regina community, one that pushes beyond common stereotypes and cliches.

Zugarramurdi is Salve Regina’s first Fulbright teaching assistant from Uruguay. She was born and raised in the small countryside community of Estacion Ortiz, Lavalleja. “My childhood was kind of wild,” she said. “I used to go to school by horse and I always used to enjoy a lot of time in nature. That’s why I feel like here I’m not going to be homesick because it has a lot of great areas.”

To fulfill her early passion to learn another language, Zugarramurdi began traveling by bus at age 10 to the nearest city to study English. She was so excited that she brought what she was learning back to her home to share with her classmates. “My primary teacher found it so nice that she gave me a blackboard for my living room and my friends would come to my house to learn English,” she said.

Zugarramurdi moved to Uruguay’s capital city, Montevideo, when she was 19 to attend university. She graduated in 2012 from Instituto de Profesores Artigas with a degree in English language teaching, and has been teaching English in secondary public schools since.

“As a teacher I always wanted to travel to places, not just to read about a culture but to live and be immersed in that place,” she said. “I’m so happy I’m here. I really want to take advantage of this opportunity and share as many things as possible about my country.” That will include sharing her favorite foods like tortas fritas, dulce de leche and chivito, traditional drink like mate, and dances like candombe, tango and polka.

“I think the more we know about other countries and the more we get in touch with different people the richer our cultures become,” she said. “I would like to learn about your traditions and share mine with you.”