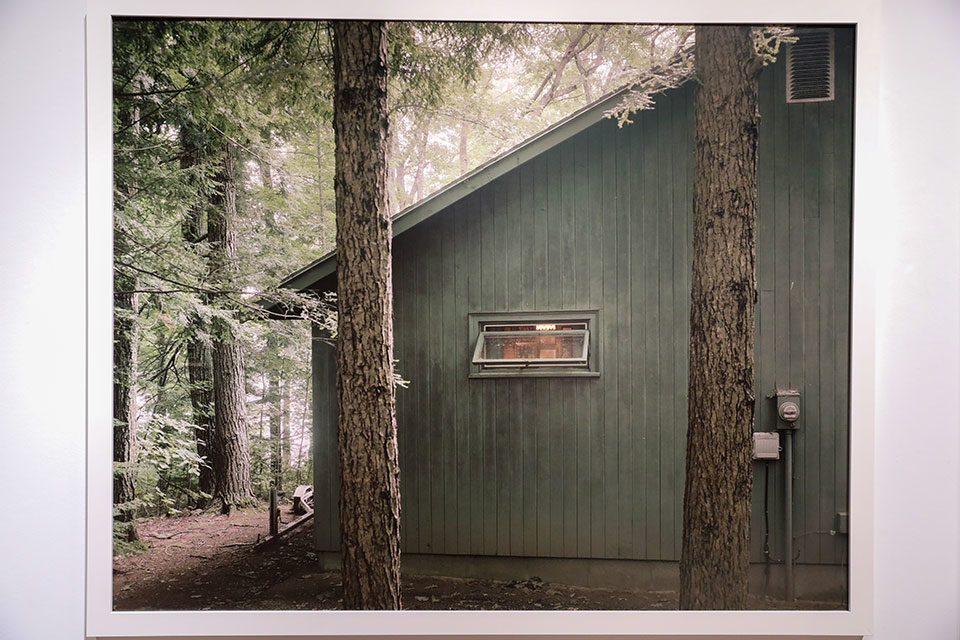 Jodie Mim Goodnough, assistant professor of photography at Salve Regina, is accomplishing two milestones with her new autobiographical exhibit, “Jodie Mim Goodnough: Stronger and Weaker, More and Less.” The collection of photographic and sculptural works is her first one-person show at Salve Regina as well as the most personally vulnerable exhibit she’s developed so far in her career as an artist.

“It is 100% the most personal,” Goodnough admitted. “It feels a little weird, to be sure.”

The exhibit will be held at The Department of Art and Art History’s Dorrance H. Hamilton Gallery from Jan. 30 to Feb. 26. On Thursday, Jan. 30, the campus community and the general public are invited to attend a gallery reception for the artist, which will run 5-7 p.m. in the Hamilton Gallery. 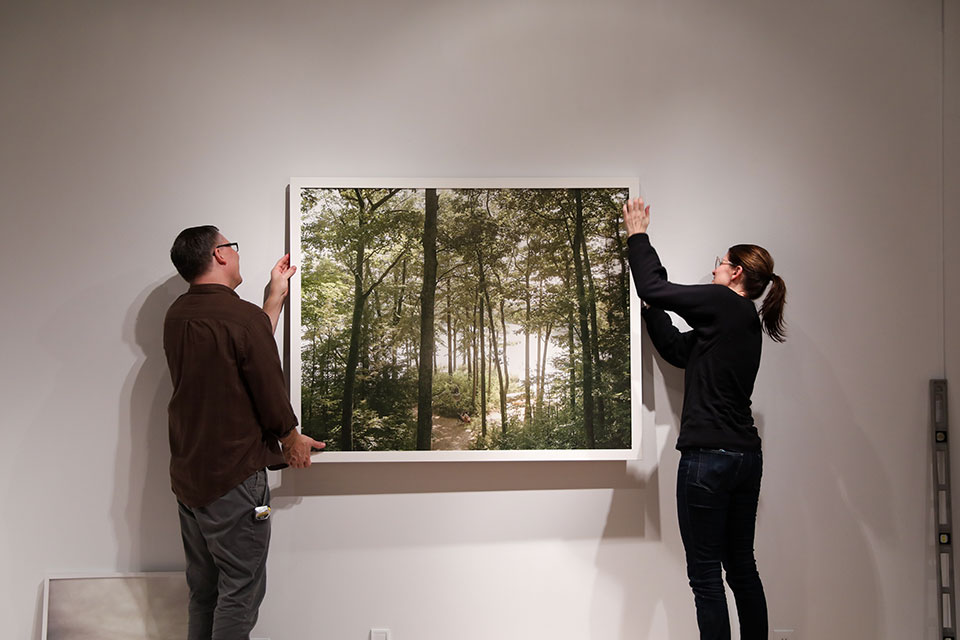 Goodnough and Ernest Jolicoeur, director of the Dorrance H. Hamilton Gallery, started to hang the exhibit’s photography on Monday, Jan. 27. 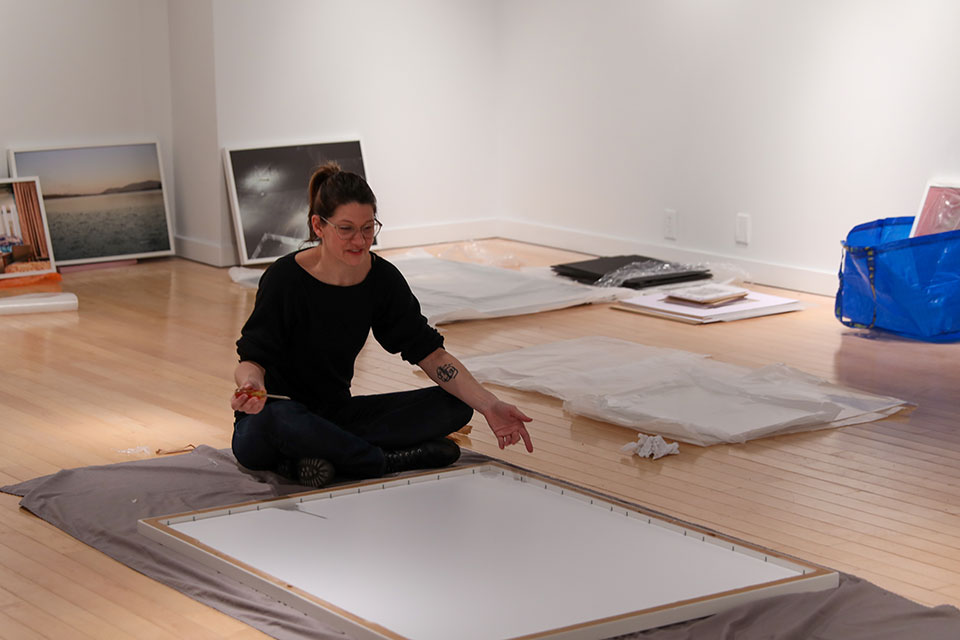 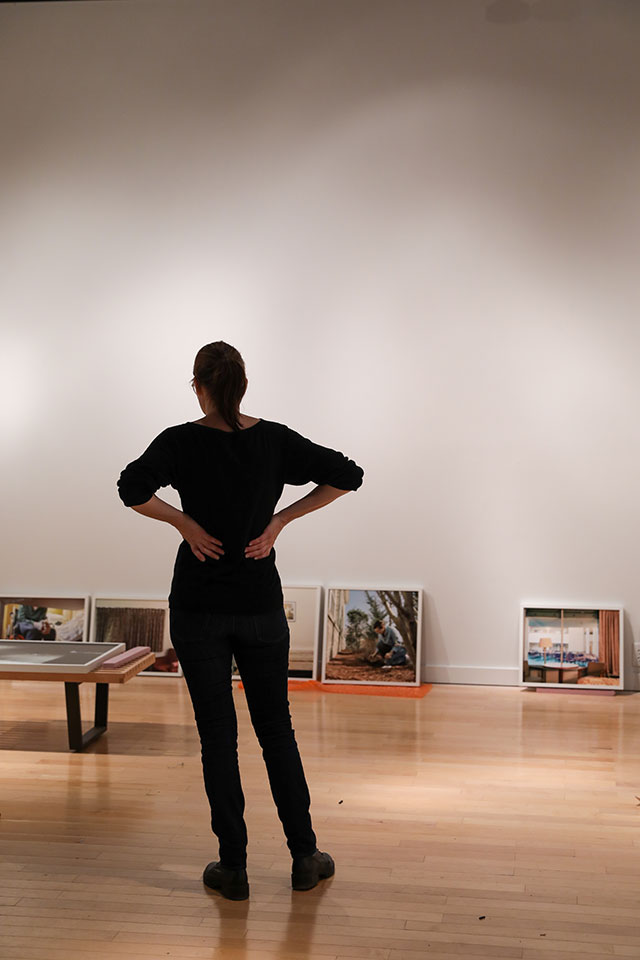 According to Goodnough, she felt it was important to exhibit this particularly personal collection of her work here at Salve Regina because of the important relationships she’s developed with other faculty and the teaching opportunity for her students.

Goodnough’s students have collaborated throughout the process of putting together this exhibit, and they helped select the photos that will be on display from over 70 photos in Fall 2019. Caitlyn Rubino ’22 participated in helping her hang the show as a student employee.

“The way that Salve talks about our shared humanity—it’s nice to have a show like this here,” Goodnough said. 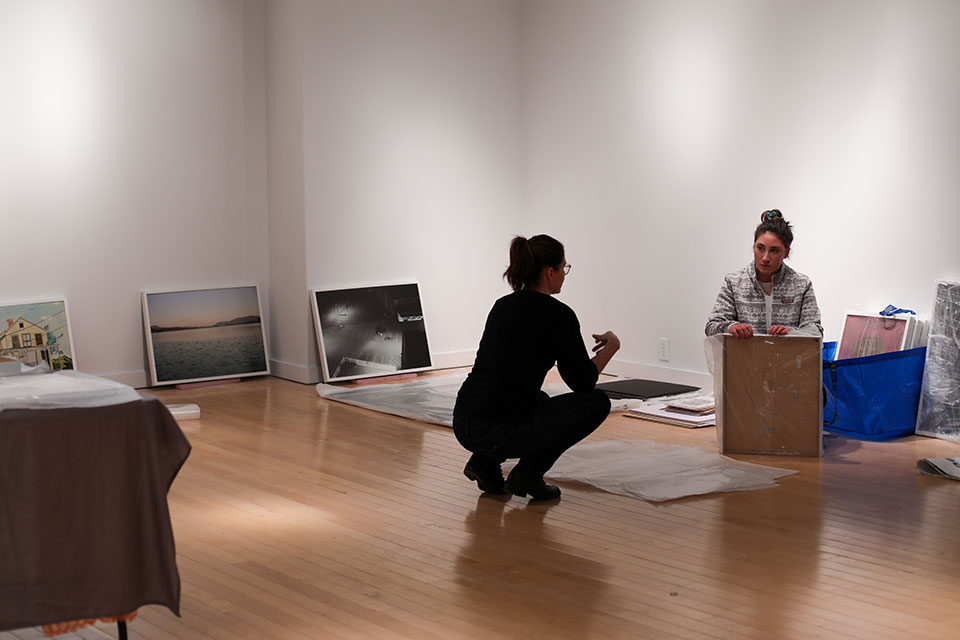 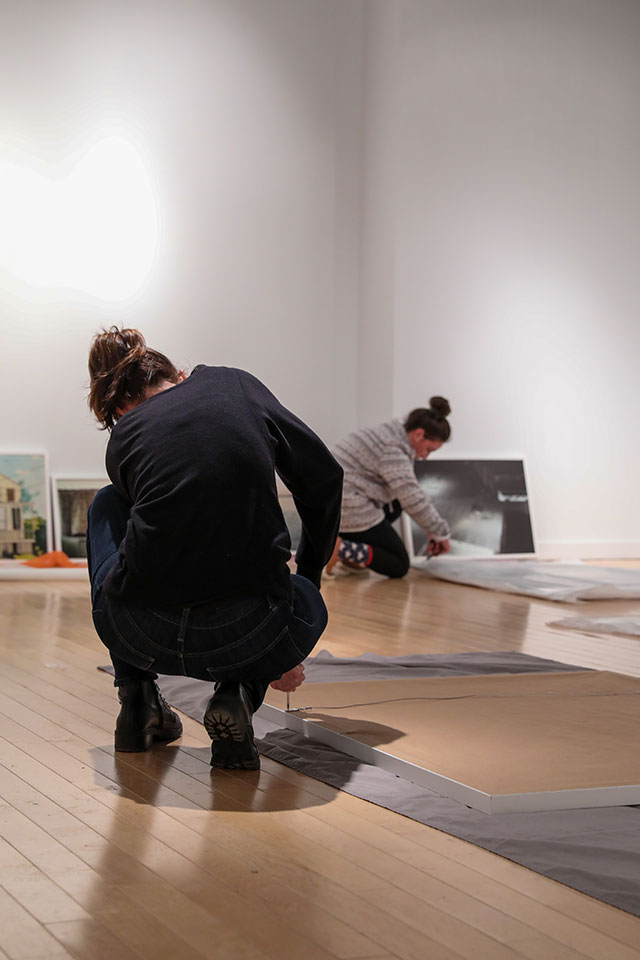 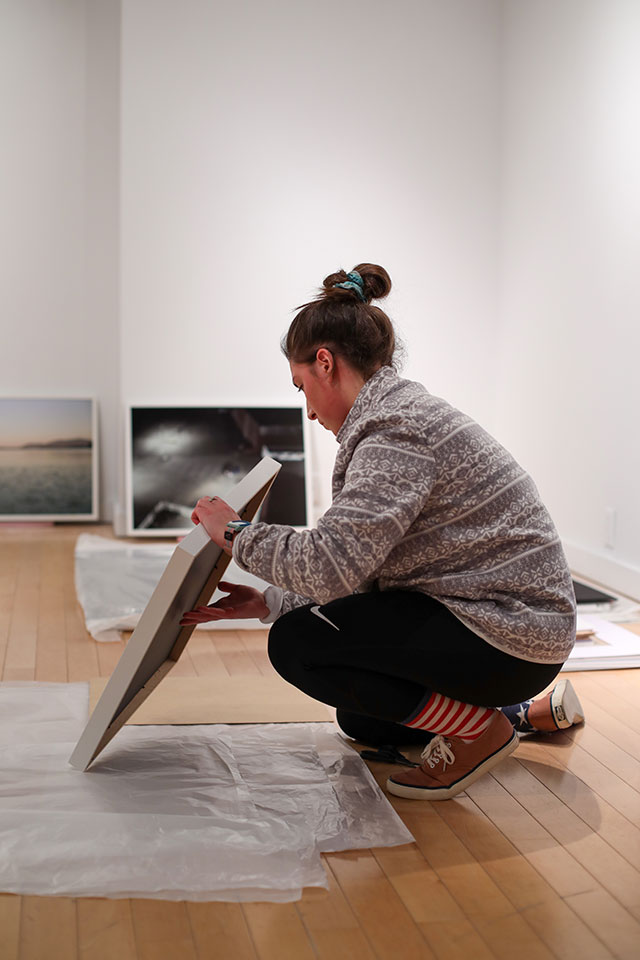 “Jodie Mim Goodnough: Stronger and Weaker, More and Less” is largely about the loss of Goodnough’s father from heart disease and the way her mother and herself have both changed and coped with losing such an important part of their lives. While Goodnough has half-brothers, she is her mother’s only child—and when Goodnough’s father passed away, it left what was once a close bond of three people stripped down to two.

“My dad worked in retail, didn’t go to college … but was also like the smartest person I’ve ever met,” Goodnough described. “He could tell you anything in the world about World War II, read every book on the subject. He was a stamp collector, a history buff. He was constantly interested in learning even though he didn’t go to college.”

Goodnough recalled how her father’s copious reading often challenged her to read books far beyond her grade level, and this love of reading and education spurred her and her two half-brothers on to develop a deep love of education; all three of her father’s children hold advanced degrees.

“Ideally, the show will start with this idea of family illness and loss but then kind of move … into this new time of life post losing a parent and how that feels very different,” Goodnough said. “It’s not as sort of day-to-day painful; there’s more of an emptiness.” 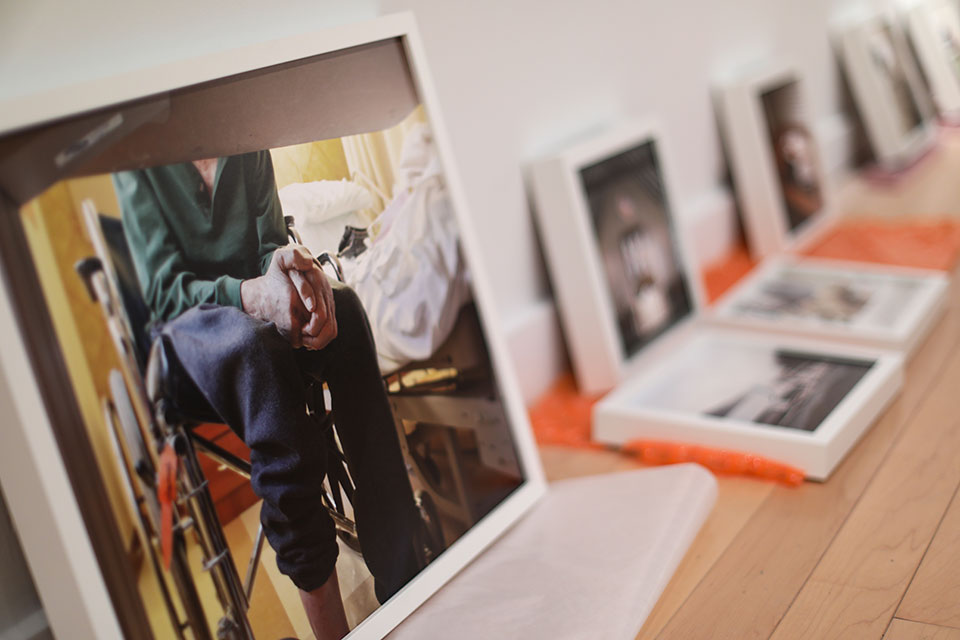 A photo of Goodnough’s father as he succumbed to heart disease.

The project that would become “Jodie Mim Goodnough: Stronger and Weaker, More and Less” began spontaneously 10 years ago as Goodnough’s father was dying in November 2011. Goodnough was in graduate school at the time, and when she went home to attend the funeral, she called a friend from school and had her camera overnighted to her.

“It was the only way I could deal with it,” said Goodnough. “It was like, ‘I need to do something with myself to get through this moment.’ ”

Over the course of 10 years, Goodnough shot hundreds and hundreds of photographs—mostly with a large format film camera. Goodnough shoots in film because the quality of film scans are enormous.

“A lot of these files were large format negatives, so the negative themselves are like 4-by-5 inches,” Goodnough explained. “When you scan that, you get an incredible amount of detail, and so you can blow it up pretty large.” 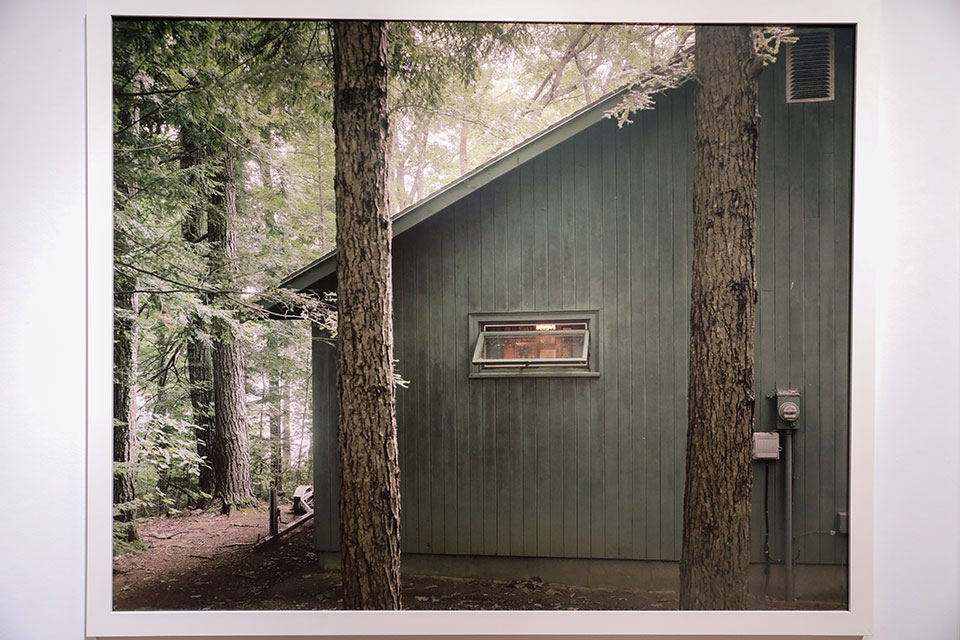 Some of the photographs hold fine detail due to Goodnough’s work with film, large format cameras, and larger negatives. 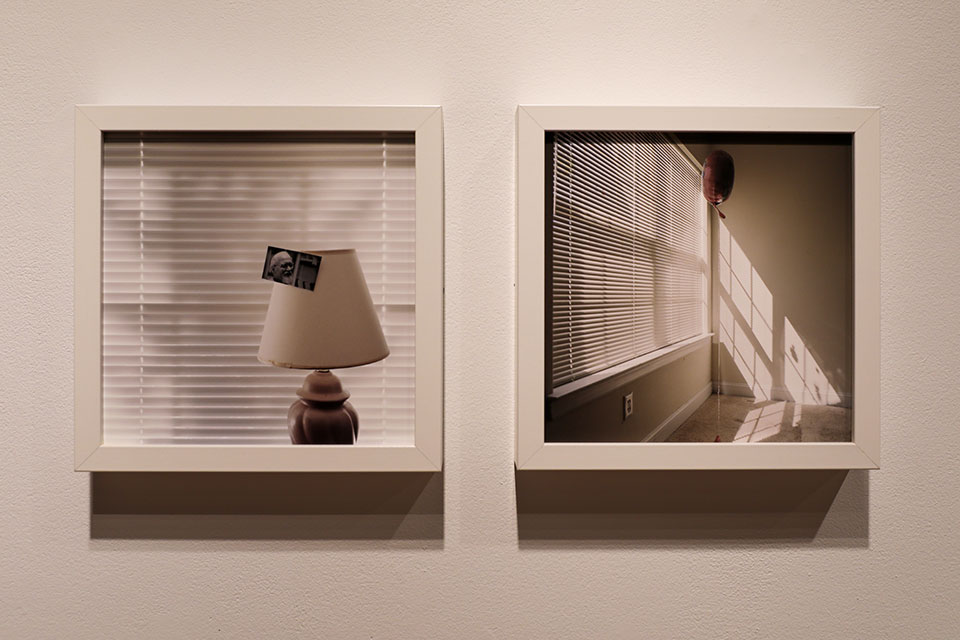 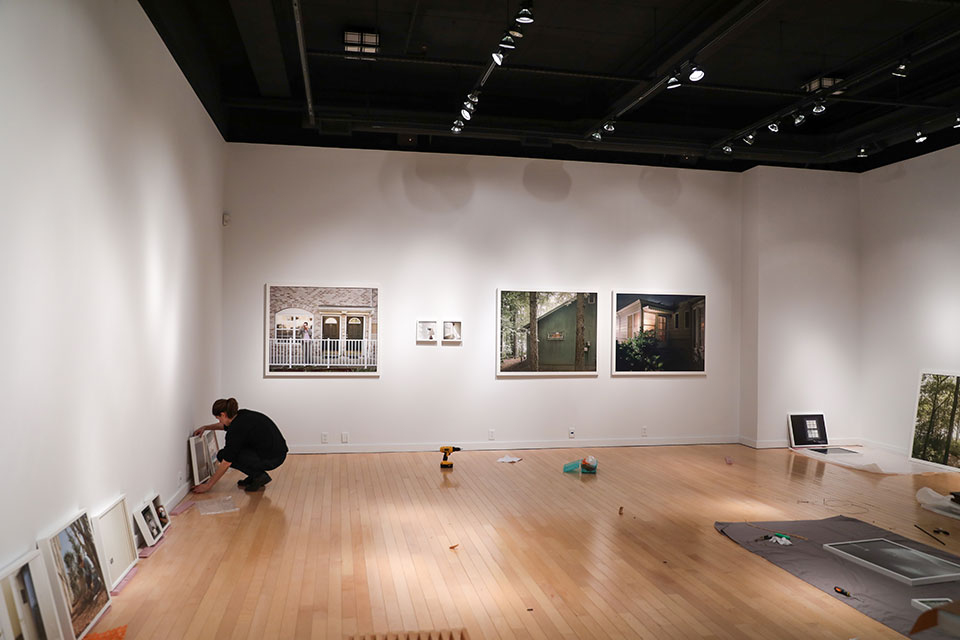 The show is also heavily influenced by Goodnough’s mother, who currently lives in New Hampshire and has numerous health problems, according to Goodnough. Growing up, her mother was a painter, and Goodnough has been highly influenced by her mother’s own use of imagery throughout her life. 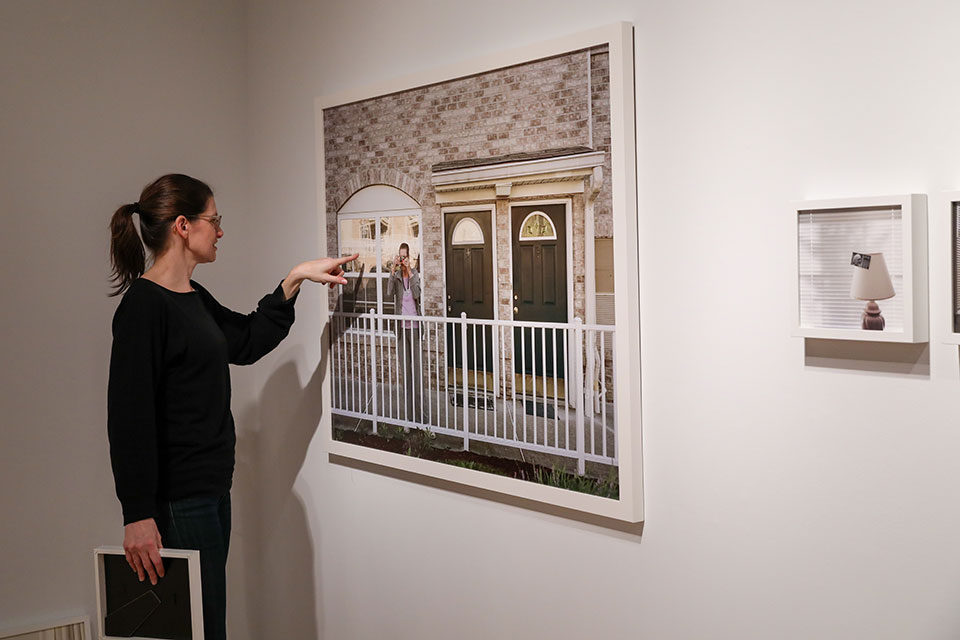 Goodnough’s mother is featured in many of the images both as a visual subject and through her own artwork. 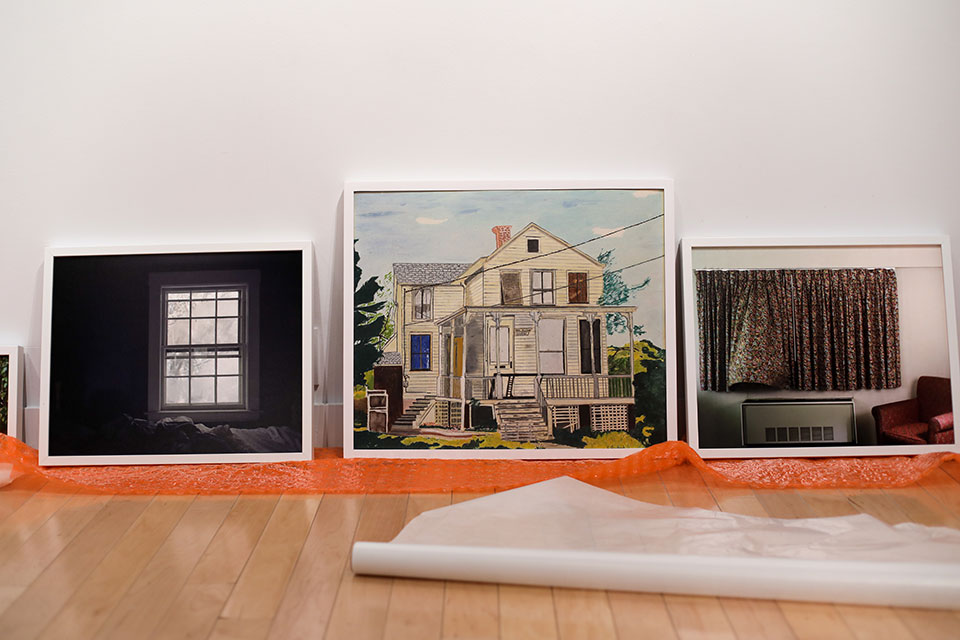 Using exterior versus interior images, Goodnough explores spaces and the contrast between the chaotic images of watching her whole world change—like packing and moving a parent’s belongings—alongside the calm, soothing images of nature that have brought her solace.

“I spend a lot of time driving around in New Hampshire … to take care of [my mother],” Goodnough described as she shares the process behind one of her photographs. “This is Lake Wentworth … and I often will just stop,  because a lot of my other work that I’ve shown … is about how nature affects our moods and emotions. And so I kind of use it as like a little bit of a healing, you know, spending time in nature.” 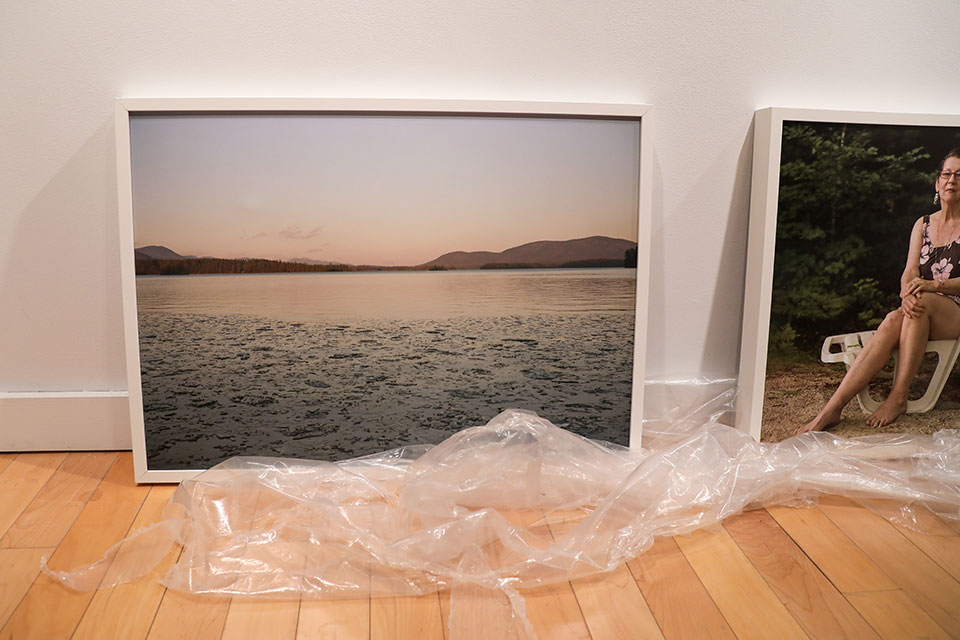 Goodnough is hoping that through her exhibit, she can help someone feel less alone and create a shared experience even through a subject so personal to herself.

“It’s a little sensitive, but it’s also … universal in a way that some of my other work might not feel as universal,” Goodnough said. “I feel like this is something that I can connect with other students on and other faculty members.”

For more information on the exhibit, go here.

Jodie Mim Goodnough is an artist based out of Providence, Rhode Island, whose work includes photography, sculpture, performance, video and sound.  She attended the Salt Institute for Documentary Studies in Portland, Maine, and received her MFA from Tufts University in May 2013. Her work has been shown nationally in both solo and group exhibitions, including at the Midwest Center for Photography, the Newport Art Museum and at Spring/Break Art Fair in New York City. Her work has been reviewed in publications such as Art New England and the Boston Globe. She is a recipient of a 2019 Pollock-Krasner Foundation grant.