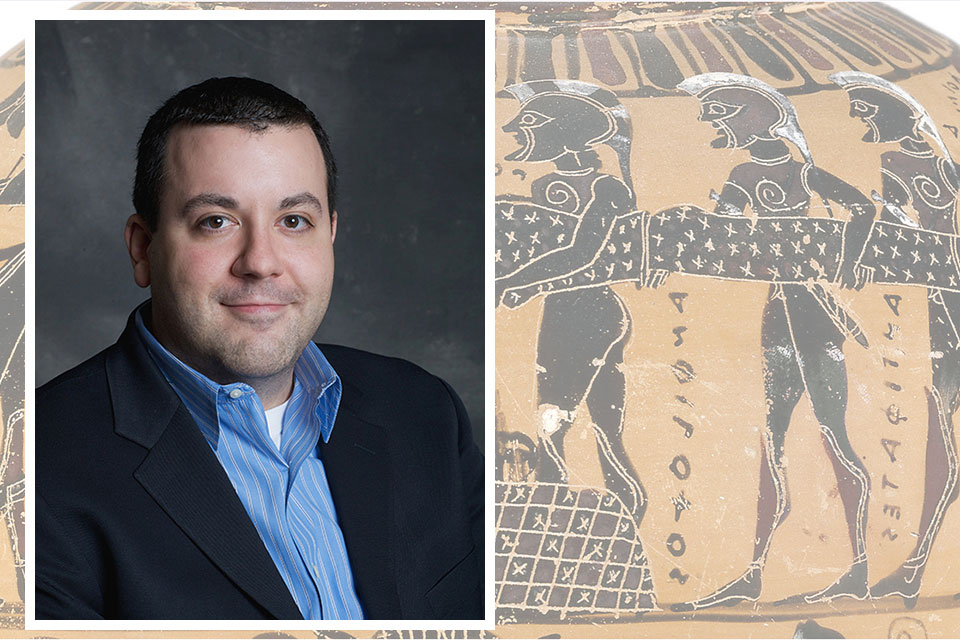 Dr. Anthony Mangieri’s book, “Virgin Sacrifice in Classical Art: Women, Agency, and the Trojan War,” has been selected as part of a new series on gender and art launched by Routledge, a global publisher in the humanities and social sciences. Mangieri is an associate professor in the Department of Art and Art History and coordinator of the women, gender and sexuality studies program.

Mangieri’s book, which was published by Routledge in 2018, is a cultural history that explores how the representation of the mythological sacrificial virgins in Greek, Etruscan and Roman art offers new interpretations and ideas on women’s identities and female agency in the ancient world.

The Trojan War begins and ends with the sacrifice of a virgin princess. In exploring the representations of Iphigeneia and Polyxena in Greek, Etruscan and Roman art, Mangieri offers a broader cultural history that reveals what people in the ancient world were seeking in these stories.

“While most scholars agree that the ancient Greeks and Romans did not practice human sacrifice, the myth of virgin sacrifice appears persistently in Classical art and literature for over a millennium,” Mangieri said. “My book seeks to explain why. I was interested in learning what ancient people were seeking in the stories of virgin sacrifice.”

His book is the first of its kind to analyze and interpret how representations of the sacrificial virgin in art express manifestations of female power and agency that were previously unrecognized, and that present a more nuanced understanding of female agency in the ancient world. In January, he presented a paper related to his book at the winter conference of the New York Classical Club, held at New York University.

“The violence that we find in some Greek myth and storytelling is a reflection of the concerns, anxieties, and preoccupations of the people who created them,” Mangieri said. “While these stories may not reflect historical practices, they tell us a great deal about what was important to the people who told them. In a similar way, superhero and post-apocalyptic films and stories today, for instance, reveal a great deal about our society and can be interpreted in different ways.”

Mangieri is currently working on his second book, tentatively titled “Epic Dress: Textile Ornament and Meaning in Greek Art.” This new work analyzes the poetics of adorning dress in ancient Greek art by contextualizing the visual representations alongside the role textiles play in other traditions, like epic poetry.

“I interpret the ornamentation of dress in vase painting and sculpture as a poetic creation that artists use to tell stories and add meaning to their work,” he said. “In recovering how artists use the decoration of textiles in complex and meaningful ways, my book identifies new forms of storytelling, expands iconographic studies, and transforms our understanding of ‘ornament.’ Ultimately, my book demonstrates the importance of dress and storytelling as expressions of human experience.”

Mangieri holds a Ph.D. in Greek and Roman art from Emory University, a master’s degree in art history from Hunter College and a bachelor’s degree in modern languages from Pace University.