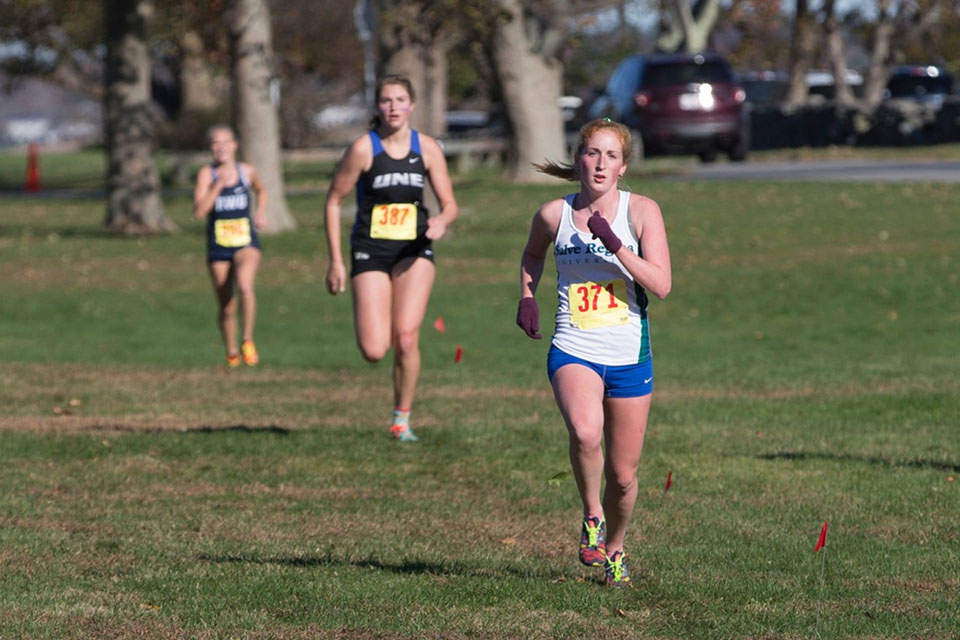 The men’s cross country team met one of its season objectives in the Commonwealth Coast Conference championship last Saturday, with all five scorers breaking 30 minutes for 8,000 meters for the first time this fall.

Aidan Lynch ’21 led the way for the Seahawks with a season-best time of 28:32.2, and Brett Jutras ’20, Tanner Owens ’20, Chandler Da Cruz ’20 and Riley Rancourt ’20 completed the scoring as Salve Regina finished eighth overall.

Rancourt was also named the senior scholar-athlete for men’s cross country. A double major in administration of justice and political science, he had the highest GPA among the athletes nominated for the award. Rancourt is the second Seahawk in program history to earn the award.

In the women’s race, Olivia Owen ’20, Cate Norton ’22 and Christina Moran ’22 led Salve Regina to a third-place finish. Owen raced to a career-best performance and placed second in the meet, crossing the finish line at 23:12.8. Norton and Moran also improved on their personal-best performances at the championship distance, finishing at 23:28.5 and 23:48.3.

Owen, Norton and Moran all improved their standing on the program’s all-time performance list for 6,000 meters. Owen is now the fourth-fastest individual in team history, and her time stands as the eighth-fastest ever run for Salve Regina.

The women’s team will field a lineup in the USA Track & Field New England Open cross country championship on Sunday, Nov. 10 in Boston.