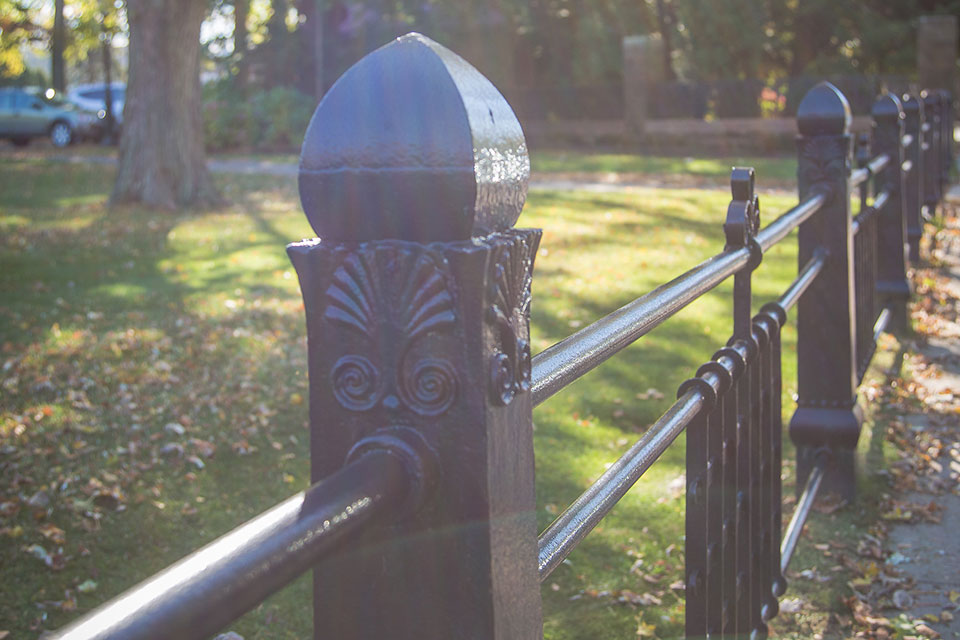 Salve Regina will receive a Doris Duke Historic Preservation Award for the restoration of the University’s cast-iron and ornamental wrought-iron fencing along Shepard and Ochre Point avenues during an awards celebration scheduled for Friday, Sept. 6.

A joint program of the Newport Restoration Foundation and the city of Newport, the Doris Duke Historic Preservation Awards recognize exemplary preservation projects and educational activities and acknowledge individuals who have made significant, lifetime contributions to the preservation of the built environment.

The restored fencing was originally part of tobacco heiress Catherine Lorillard Wolfe’s sprawling Vinland estate, designed by the noted architectural firm of Peabody & Stearns. Built in the 1880s, the estate was gifted to the University in 1955.

Vinland’s grounds were conceptualized by renowned landscape architect Ernest Bowditch. In creating the fencing’s custom design, Bowditch paid tribute to Wolfe’s close friend William Beach Lawrence, a jurist and politician from whose estate she purchased the land for Vinland. In his honor, the gridiron center panels symbolized the third-century Christian martyr St. Lawrence. Use of this symbol in America during the early 1880s, especially in a domestic setting, was rare if not unique.

Supported by a grant from the Alletta Morris McBean Charitable Trust, the restoration project included foundry replication and casting of fence posts, panels and piping that were damaged beyond repair, as well as the return of fencing that had been removed from the original site. Protective measures, such as the installation of new curb stops along Shepard Avenue, were also taken to ensure the continued preservation of the historic fencing.

Salve Regina also received a Doris Duke Historic Preservation Award in 2013 for the reclamation of Carolyn House, the former Ochre Lodge carriage house, for use as a student residence.