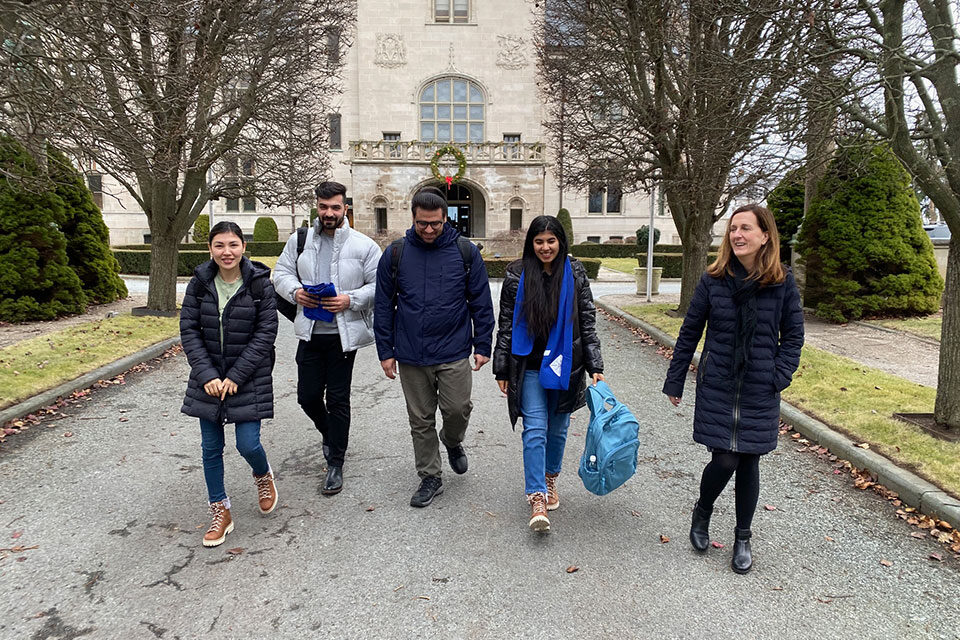 Four Afghan students who have been displaced from their native country since being evacuated from Kabul in August 2021, arrived on Salve Regina’s campus this week to enroll as transfer students. The four students – and a fifth whose resettlement process continues to be delayed – are among 250 students attending universities across the U.S. as they resettle to the U.S. on a new program for students from Afghanistan.

Salve Regina is participating in this program as a first step toward becoming a leading partner in the developing national initiative to create higher education pathways for refugee students from around the world.

“Our new students from Afghanistan inspire us with their courage and perseverance,” Dr. Armstrong said. “We hope to offer them as much support as possible in their educational journeys, and our community is truly blessed by their presence.”

Dr. Armstrong presented the students with blue Salve Regina scarves, after which Omari thanked the entire University community for making their attendance here possible. He talked about the differences he’s already experienced when compared to attending universities in Afghanistan and Iraq.

“Here it is totally different,” Omari said. “We arrived yesterday and already met about 50 people at least because the environment is so friendly. You can find new friends, you can build a solid and strong network. And for my major, networking and communication is vital, so thank you so much.” 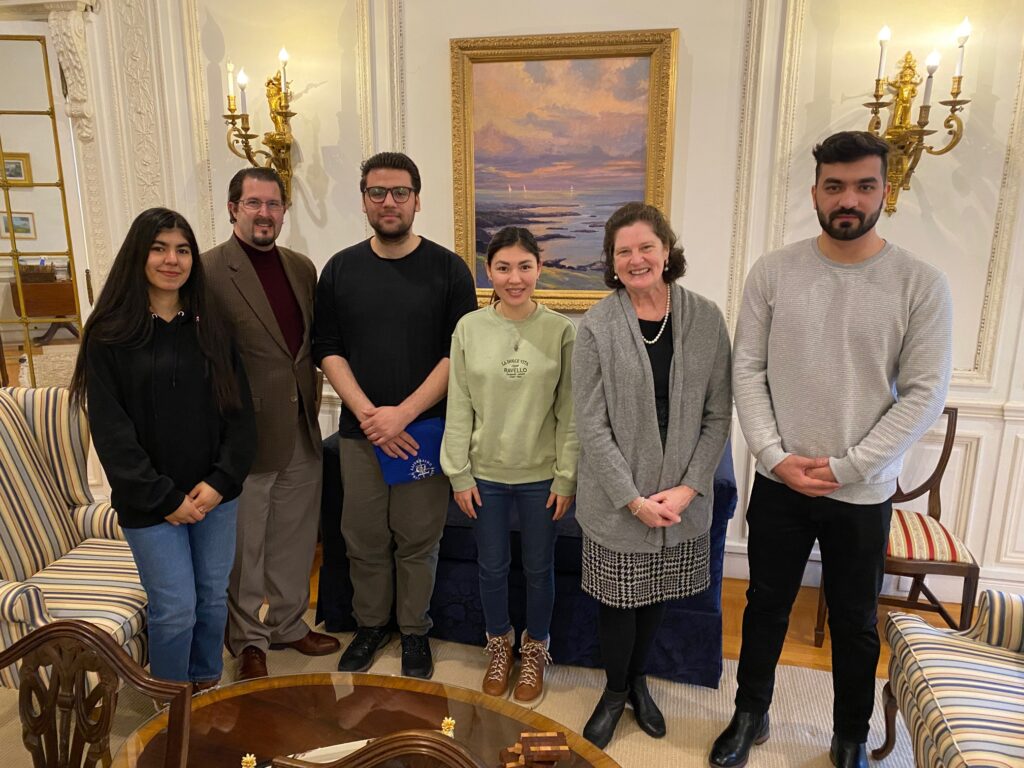 Each of the students had been attending classes at the American University of Afghanistan (AUAF) before being evacuated to Iraq, where they continued their studies at the American University of Iraq (AUIS) in the Kurdistan region. They arrived in the U.S. on Jan. 3 and were assisted by the resettlement agency Dorcas International while residing in temporary housing in Providence, Rhode Island.

In addition to receiving tuition support from Salve Regina, the students are receiving funding and support from the Qatar Scholarship for Afghans Project (QSAP) and the Afghan Girl’s Assistance Fund to offset the costs of room, board and other living expenses. QSAP is founded by the Afghan Future Fund (AFF), Education Above All Foundation (EAA), Yalda Hakim Foundation (YHF), Schmidt Futures and Rockefeller Philanthropy Advisors. It’s administered by the Institute of International Education (IIE) and is a unique partnership welcoming 250 displaced Afghan students to more than 40 U.S. college and university campuses.

Erin FitzGerald, director of the Center for Global Education and Fellowships and coordinator for the initiative at Salve, said she believes the majority of the students’ needs, including being placed with jobs on campus, have been met through the support of multiple University offices and external resources.

“These are such talented students whose educations and futures have been dramatically impacted by the crisis in their country,” said FitzGerald. “I am confident that our community will benefit as much from their presence and their perspectives as they benefit from the support offered them from Salve and other partners.”

As an active member of the Presidents’ Alliance on Higher Education and Immigration, Salve Regina is among universities collaborating on the effort to enroll refugee students. The Alliance is working in partnership with the United Nations Refugee Agency (UNHCR) to achieve the ambitious goal of providing 15 percent of eligible refugees with access to higher education by 2030.

The UNHCR reports 79.5 million people are currently displaced worldwide, including 26 million refugees. Of these, only three percent of college-eligible refugees are currently able to access higher education.

Rosie Hughes, an expert on refugee education at UNHCR, was on Salve Regina’s campus during the fall semester for the annual meeting of the International Educators Association of Rhode Island (IERI), where she spoke about “Responding to the Refugee Crisis: The Role of University Sponsorship” and about Salve Regina’s efforts to enroll Afghan refugees through the complementary pathways pilot program. About 30 international enrollment representatives from Rhode Island institutions attended the meeting at the Young Building.