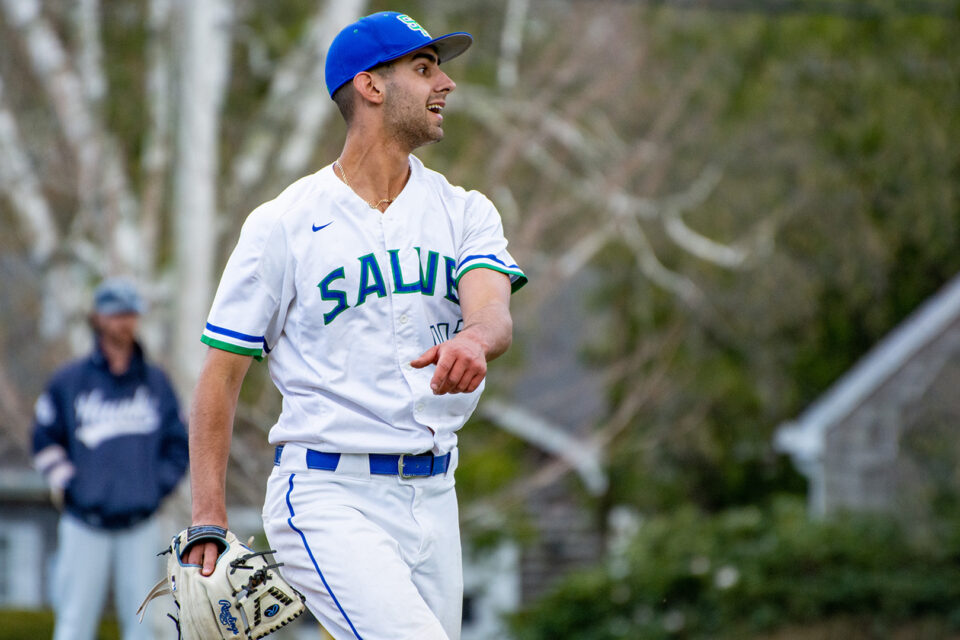 Dominic Perachi ’23 has been chosen as the American Baseball Coaches Association (ABCA)/Rawlings National Pitcher of the Year after a dominant 2022 campaign. With this award, Perachi has earned the highest athletic honor ever achieved in the history of Salve Regina athletics.

Perachi, a business administration major, began his 2022 campaign with an immaculate inning of nine pitches, nine strikes and three outs in the season-opening first frame against Johnson & Wales University. He finished with 16 strikeouts over seven innings and earned multiple weekly accolades — including from the Commonwealth Coast Conference (CCC) Pitcher of the Week, D3baseball.com Team of the Week, and the National Collegiate Baseball Writers’ Association (NCBWA).

Perachi ‘s next start came in Florida when the Seahawks took on Farmingdale State. The only hit allowed was a dribbler up the first base line to the first batter he faced, and he struck out 13 players. Perachi returned to the mound later that week in Florida to face a perennial NCAA postseason participant Southern Maine and handcuffed the Huskies for the second time in two straight matchups.

Returning to New England, Perachi took the bump in the first of several weekend matchups with CCC foes and extended his string of starts without allowing an earned run to five. Wentworth was the first team to notch an earned run against the junior lefty, and that did not come until the seventh frame of an eight-inning, complete-game outing where Perachi struck out a season-high 17 batters.

He was charged with another earned run in a 9-2 victory over Suffolk University while striking out nine Rams. A mid-week matchup with previously nationally-ranked Roger Williams University, then undefeated in CCC play, gave Perachi the opportunity to vault the Seahawks onto a path to first place in the league.

Perachi faced the Hawks again among his final three outings, which also included a pair of nationally-ranked teams, Endicott College and University of Lynchburg. In each of those three starts, he reached double-digit strikeouts to establish a new single-season program record of 120 Ks.

The Seahawks (30-13-2) clinched first place in the Commonwealth Coast Conference (CCC) with a doubleheader sweep of Endicott, also undefeated in CCC play before meeting in Newport, on the final weekend of the regular season. Perachi matched his season-high in innings pitched (eight) and exited against the Gulls with the game tied before Salve Regina won on a walk-off basehit in the bottom of the ninth. Perachi had three combined shutouts on the season.

The American Baseball Coaches Association, founded in 1945, is the primary professional organization for baseball coaches at the amateur level. Its over 13,000 members represent all 50 states and over 30 countries. Rawlings Sporting Goods Company, Inc. is an innovative manufacturer and marketer of sporting goods worldwide. Founded in 1887, Rawlings is an authentic global sports brand, trusted by generations of athletes of all skill levels.