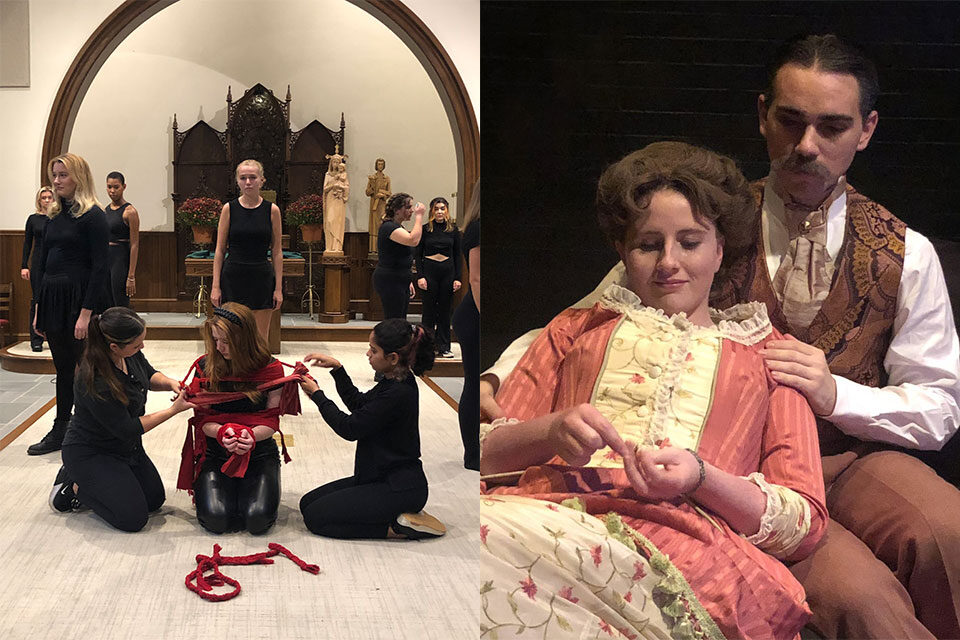 In the fall 2022 semester, Salve Regina’s theatre program put on two groundbreaking performances, entitled “The Bible Women’s Project” and “The Strindberg Experiment,” that challenged audiences to examine themes around gender and sexuality. The hard work the program did to confront difficult themes has paid off, and both of these productions are now being recognized by the northeast regional division of the Kennedy Center American Theatre College Festival (KCACTF), which runs Jan. 31 – Feb. 5 in Cape Cod, Massachusetts.

“The Bible Women’s Project” has been selected to perform in its entirety at the northeast regional division of KCACTF. Alongside this achievement, Winder Landaverde ’23 and Nathan Nelson ’23, theatre majors, were both nominated for the Irene Ryan Acting Award for their performances in “The Strindberg Experiment.” Anna Anese ’26, who is an actor in “The Bible Women’s Project,” was also chosen for the semi-final round for musical theatre.

“The Bible Women’s Project” will be holding an encore performance here at Salve Regina on Monday, Jan. 30, at 7 p.m. in Our Lady of Mercy Chapel. It is free and open to the public, but attendees can donate at the door. 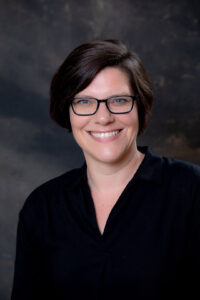 The Kennedy Center American Theatre College Festival is an annual national theatre program involving 18,000 students from colleges and universities across the country. There are eight regional festivals held in January and February that lead up to the national festival in Washington, D.C.

The goal is to celebrate the finest and most diverse work produced in university and college theatre programs across the country.

“The mission of the festival’s selected shows is to highlight new, creative and  impactful ways that theatre is changing in the country,” explained Dr. Tara Brooke Watkins, the director of the theater program at Salve Regina. “So the fact that ‘The Bible Women’s Project’ was selected means that festival responders believe that Salve theatre is actually working toward changing how theatre is done in America.”

If “The Bible Women’s Project” is received well at the regional festival, the cast has an opportunity to go to the national festival in Washington, D.C., at the end of the semester.

“It could mean that Salve Regina becomes known as a place to attend if you want to do impactful and experimental theatre that makes a difference in people’s lives,” said Dr. Watkins. 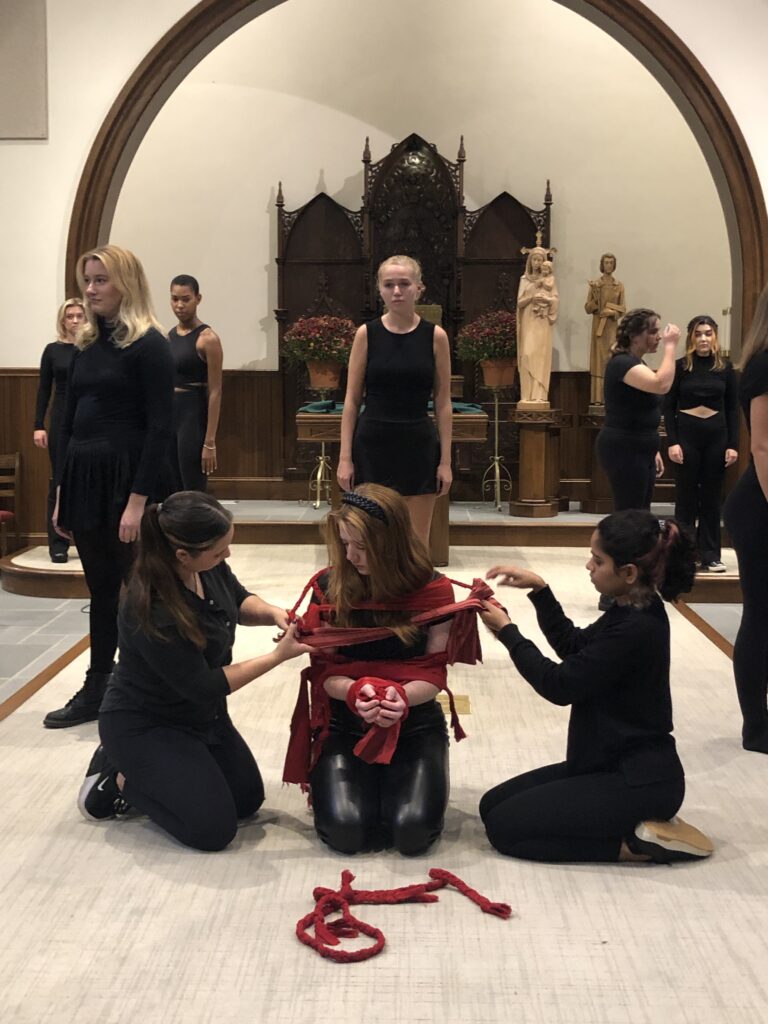 Students perform in “The Bible Women’s Project” in the fall of 2022. 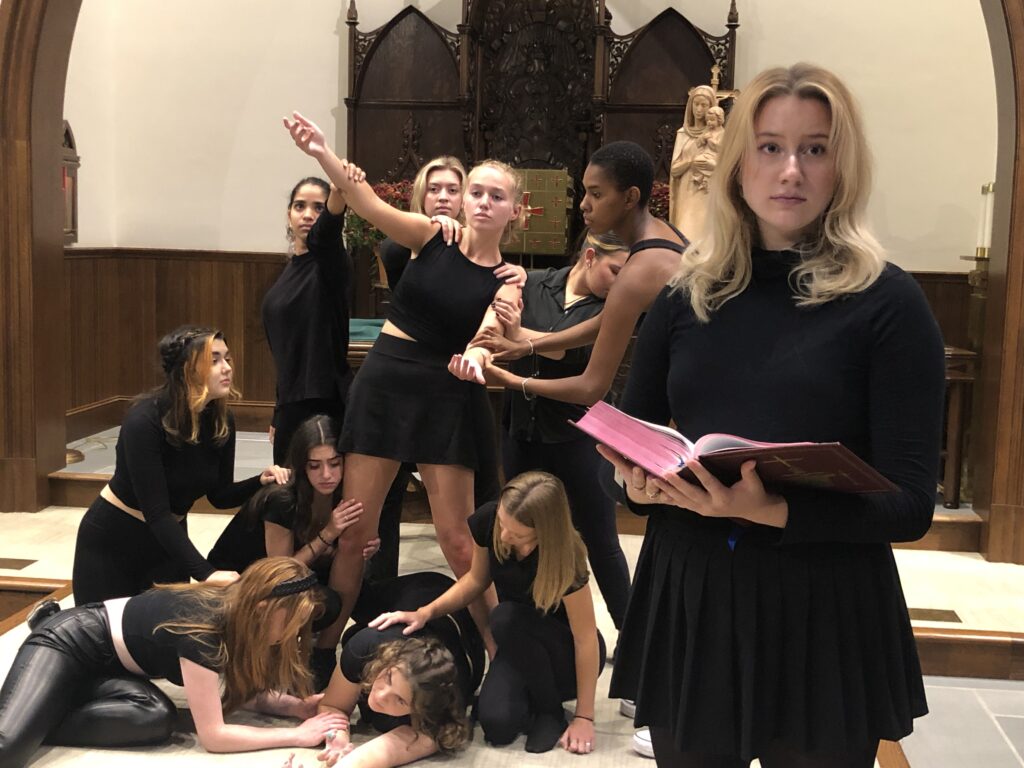 “The Bible Women’s Project” also shows how Salve Regina’s mission can come to life both on and off stage, according to Dr. Watkins.

“‘The Bible Women’s Project’ feels like it belongs in the Sisters of Mercy tradition,” said Dr. Watkins. “It’s about women’s stories and women taking space to speak their experiences. It shows women teaching, using education and theatre to act as a hand of mercy to women who have long been misunderstood, misrepresented and mistreated.”

The Irene Ryan Acting Award is a scholarship award for students who have shown great depth in their acting abilities. In order to compete for this scholarship, the nominated students have to perform to make it into the semi-final round by performing two contrasting monologues.

They can then receive the honor of competing at the national festival.

“Strindberg’s characters are not easy even for professional actors to tackle, so the fact that these two college students played such tortured roles to show the inner turmoil of gender identity struggles in the 19th century was highly demanding and risky,” said Dr. Watkins. “Winder and Nathan did it with such intense commitment that it made the acting seem effortless.” 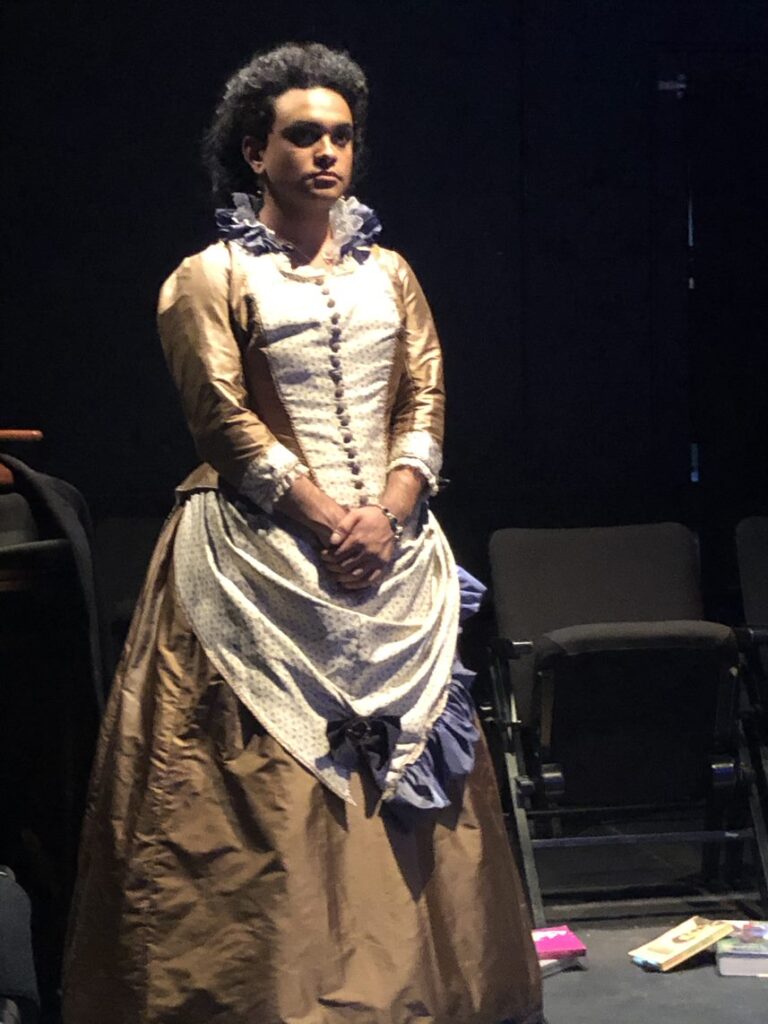 Winder Landaverde, ’23, played Miss Julie in “The Strindberg Experiment” and is nominated for the Irene Ryan Acting Award. 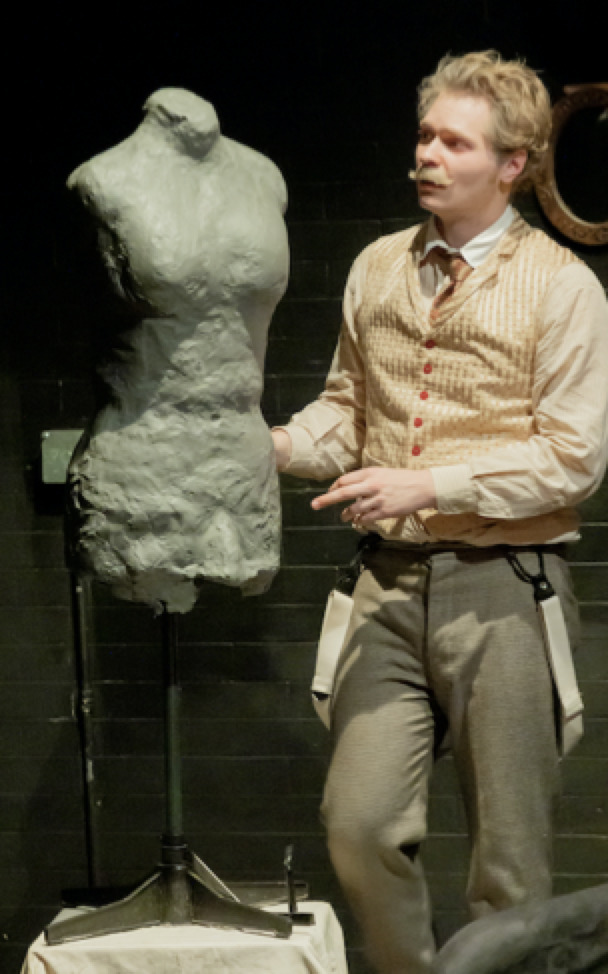 Nathan Nelson ’23 played Adolf in “The Strindberg Experiment” and is nominated for the Irene Ryan Acting Award.

Dr. Watkins was also asked to be one of two faculty members to direct a one-act at the festival.

“Overall, I think Salve’s theatre program is already standing out and will only stand out more once our students perform there,” said Dr. Watkins.

Students who were involved in either of the fall 2022 productions were invited to attend the northeast regional division of KCACTF, including stage managers, dramaturgs, tech crew and actors. Right now, the full cast and crew from “The Bible Women’s Project” are attending, along with five actors, the stage manager and a dramaturg from “The Strindberg Experiment.” Altogether, twenty students are attending.

“We believe in the power of theatre to change lives, shift culture and perspective in groups of people, and ultimately, be used as an act of mercy towards people in the audience who might identify with stories on stage,” said Dr. Watkins. “Both plays were about rethinking everything we thought we knew about certain stories and certain people and introducing us to new stories we hadn’t heard.”