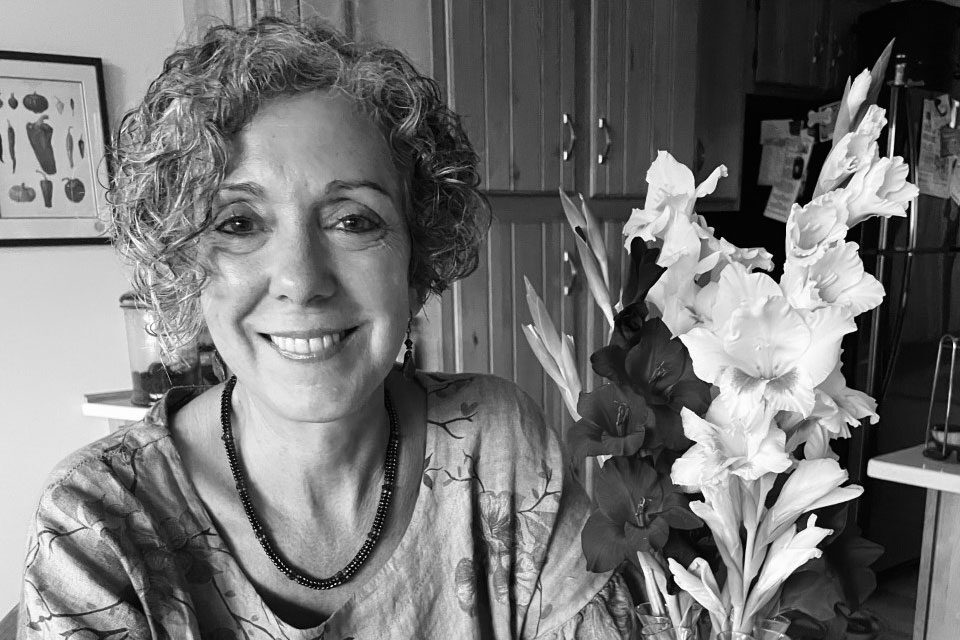 Aggie Stewart ’22 (MFA), a student of the Newport MFA in creative writing program, is a published yoga therapist and writer who has made it her life’s goal to pursue healing methods for trauma survivors and others in difficult emotional or medical positions.

The catalyst for her journey? A lifelong love for writing and yoga, as well as a family tragedy that shaped her life.

A lifelong love for writing and yoga

Growing up on the South Side of Chicago, Illinois, as one of the youngest children in her family, Aggie Stewart looked up to her older siblings.

“We were a family of readers,” Stewart described. “I always wanted to be like the big kids, so I chomped at the bit to read.”

Stewart had a strong imagination and a love for reading and writing. In grade school, Stewart’s sixth grade teacher allowed her to write her first creative story, and she loved it. She carried this love for writing with her into high school and college.

Stewart received her bachelor’s degree in English with a minor in Latin from the University of Massachusetts Amherst. After her undergraduate, Stewart continued to fuel her love for creative writing and creating literary work. Stewart pursued publishing, technical and business writing and landed multiple editorial positions in Chicago. Her skills in writing and editing also guided her to become a freelance writer and editor when she left Chicago and moved to New England. 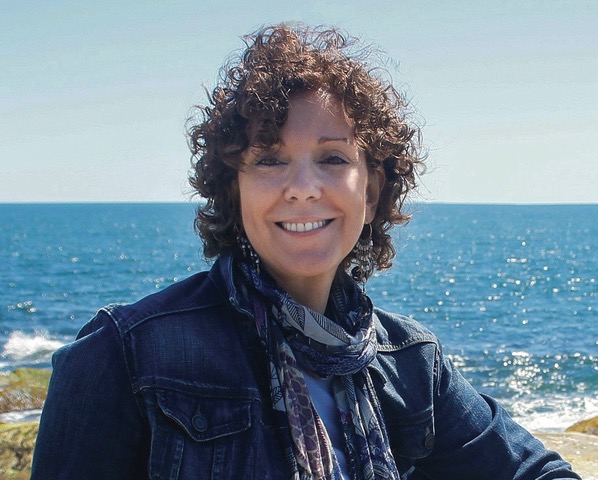 Alongside writing, Stewart trained as a certified yoga therapist and described herself as a devoted yogi. A yoga therapist is different than an average yoga teacher in that they use ancient yoga methods like breathing and embodiment techniques with modern scientific methods to help people deal with a variety of physical and emotional issues.

Stewart specializes in the therapeutic application of yogic practices for people who have experienced trauma or have been diagnosed with autoimmune conditions. In 2019, Aggie published “Yoga as Self-Care for Healthcare Practitioners” with Singing Dragon, an imprint of Jessica Kingsley Publishers in the U.K. and the U.S.

“I was always interested in finding a way to bring together my passion for writing and publishing and my passion for yoga,” said Stewart. “I looked at the ways yoga specifically supported creative expression.”

Wanting to deepen her creative work, Stewart researched MFA programs. A good friend encouraged her to check out the new Newport MFA program at Salve Regina.

“When I heard Ann Hood was starting this program, I went to a couple of open houses and had a conversation with Ann about the program,” Stewart explained.

After meeting Hood in person and seeing Salve Regina’s campus in Newport, Stewart knew it was the right fit for her.

Writing with the Newport MFA

Salve Regina’s master of fine arts in creative writing program, the Newport MFA, has residencies twice a year in January and June. Faculty mentors guide the writers in the genres of fiction, poetry, nonfiction and historical fiction while they work through their manuscripts. The residency provides genre-based workshops, craft talks, readings and social opportunities. One of the unique components of the residency is the cross-genre workshop during which students in all genres meet to generate writing around a specific theme or skill.

As a part of the creative nonfiction genre, Stewart worked closely with students in the same genre. Collaborating with other students in the program during the cross-genre workshop was one of Stewart’s favorite parts of her residency.

Stewart (second from right) with other classmates in the Newport MFA, alongside Ann Hood (far right).

“We got to learn from our colleagues who were working in different genres and how they would approach a similar prompt or subject from their particular lens,” said Stewart.

Going into the Newport MFA, Stewart had a very specific project in mind. She wanted to write about the traumatic experiences her family and she faced while growing up in the shadow of her aunt’s murder, which took place when her mother was pregnant with Stewart. This was a closely guarded secret for many years, but the reality of it loomed like a shadow within Stewart’s family.

The material Stewart had to work for her memoir is dark and heavy, and Stewart struggled with what the heart of the story was, because there were several stories to tell within it.

“I spent a lot of time in the program trying to figure out what that story was,” said Stewart. “As I got closer and closer to it, I was also grappling with the fact that it was dark with a lot of heavy emotions in it.”

Not wanting to turn away readers, Stewart had to learn how to emotionally pace her story. She explains finding all sorts of guidance and support for narratively pacing a story, but none on how to pace the emotions that live underneath the plot. Stewart could not find any answers to her question, so she undertook her own study by doing critical thesis work for her MFA.

“Emotional Pacing in Memoirs of Childhood Familial Trauma” was Stewart’s completed thesis at the end of her MFA. Bernadette Murphy, adjunct professor and one of Stewart’s mentors in the Newport MFA, encouraged her to publish an essay about it and to apply to present a panel on the topic at the Association of Writers & Writing Programs Conference (AWP Conference), an annual destination for writers, teachers, students, editors and publishers of contemporary creative writing that draws thousands of people.

Stewart pitched a short essay on the topic to Brevity: A Journal of Concise Literary Nonfiction, as well as an essay to Assay, A Journal of Nonfiction Studies. After reading the short essay, Assay wanted to publish the entire thesis. Stewart’s panel proposal on emotional pacing in the trauma narrative was also accepted for the AWP Conference in Philadelphia, Pennsyvania, in the spring of 2022.

As Stewart reflected on the work she completed with her multiple mentors and colleagues during the Newport MFA, she thanks multiple adjunct professors who teach presently or taught in the past—including Edgar Kunz, Alden Jones, Bernadette Murphy and Danielle Trusonni—for helping guide her through her critical and creative thesis.

“I am proud of where I am now, and I would not be where I am now if it was not for my mentors and my cohort of colleagues,” said Stewart.

Stewart has continued to write her memoir along with multiple essays. She is also developing a holistic writing coaching business, and she is creating courses on various creative writing topics, as well as contemplative practices to support writing. She will begin teaching these courses in 2023. 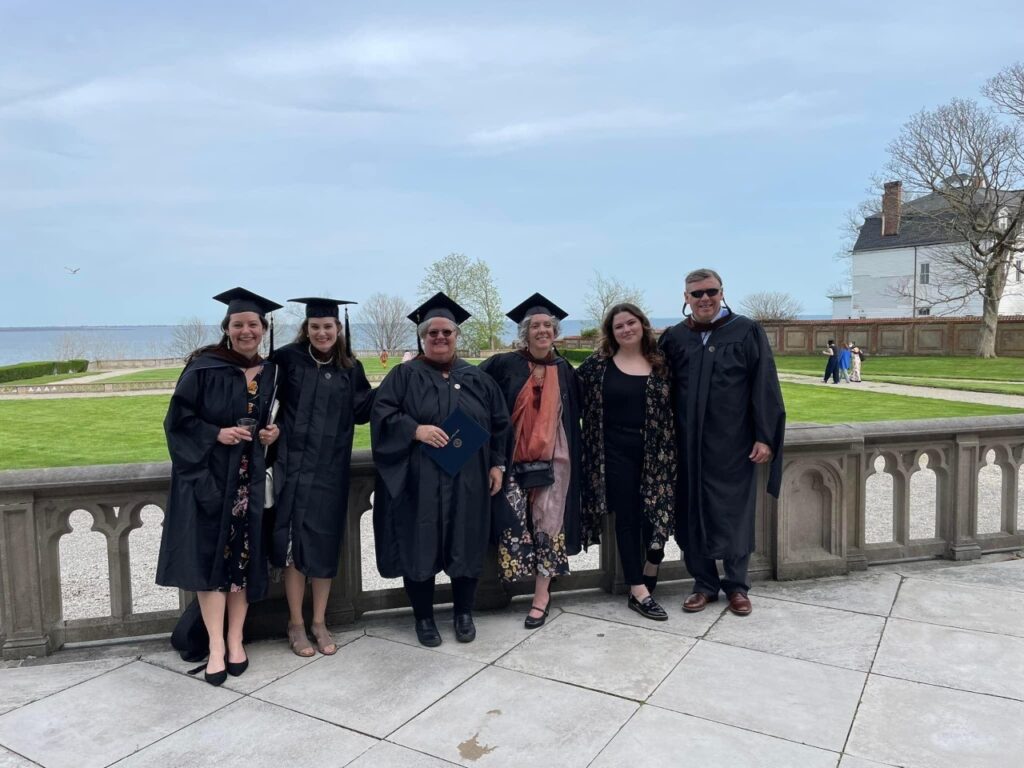 Stewart walked in the May 2022 graduate commencement ceremony for the Newport MFA.