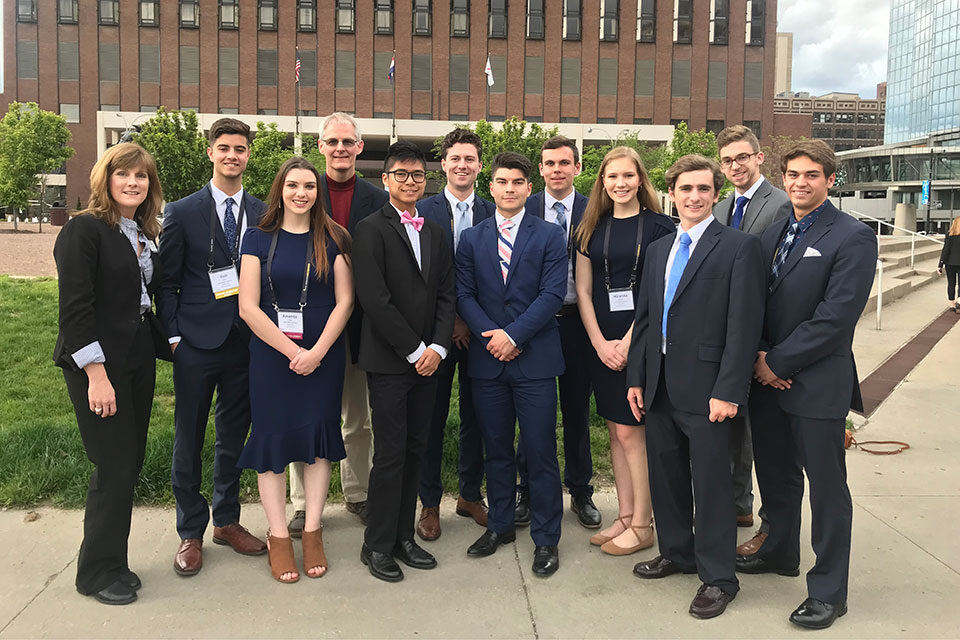 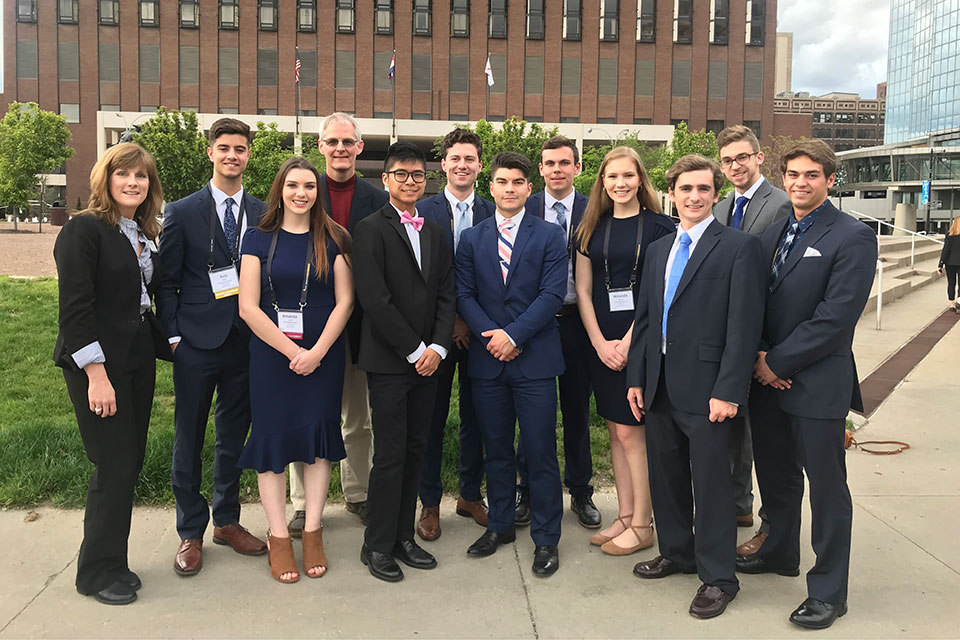 Photo from Enactus competition after the group finished presenting at National Competition in Kansas City in May 2019.

The Salve Regina students placed second overall to Oklahoma State University in the Expo’s first-ever Early Stage Competition, which was conducted online due to the coronavirus pandemic, and financial management major Miranda Benoit ’22 was named a Top 3 Enactus Chapter President in the United States.

“The great thing about Enactus is you need a very diverse group of people to make a successful project,” Benoit said. “Our Enactus team has so much talent, from writers to photographers to graphic designers to public speakers to leaders. There were many first year Enactus members on our team this year that stepped up and took on huge roles.” 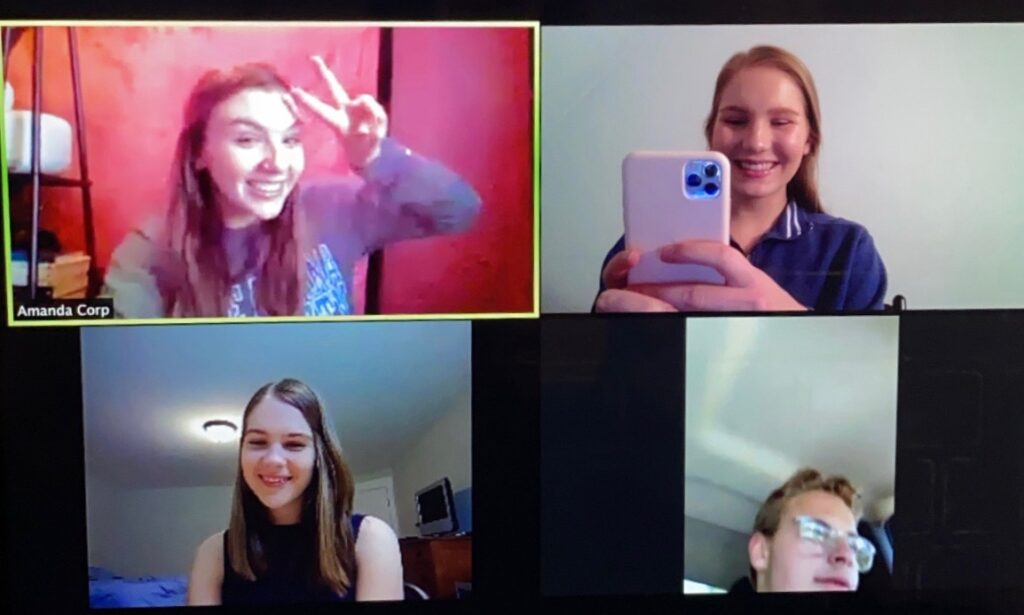 Students meet remotely to compete for Enactus’ National Exposition in 2020.

“When we found out our Nationals trip to Kansas City was cancelled, we were bummed because it was so much fun last year, and we grew a lot closer as a team in the weeks leading up to it,” Benoit said. “However, I am so proud of how our team adapted quickly to the change in competition format. There is a really great team dynamic and that certainly helped us overcome these obstacles.” 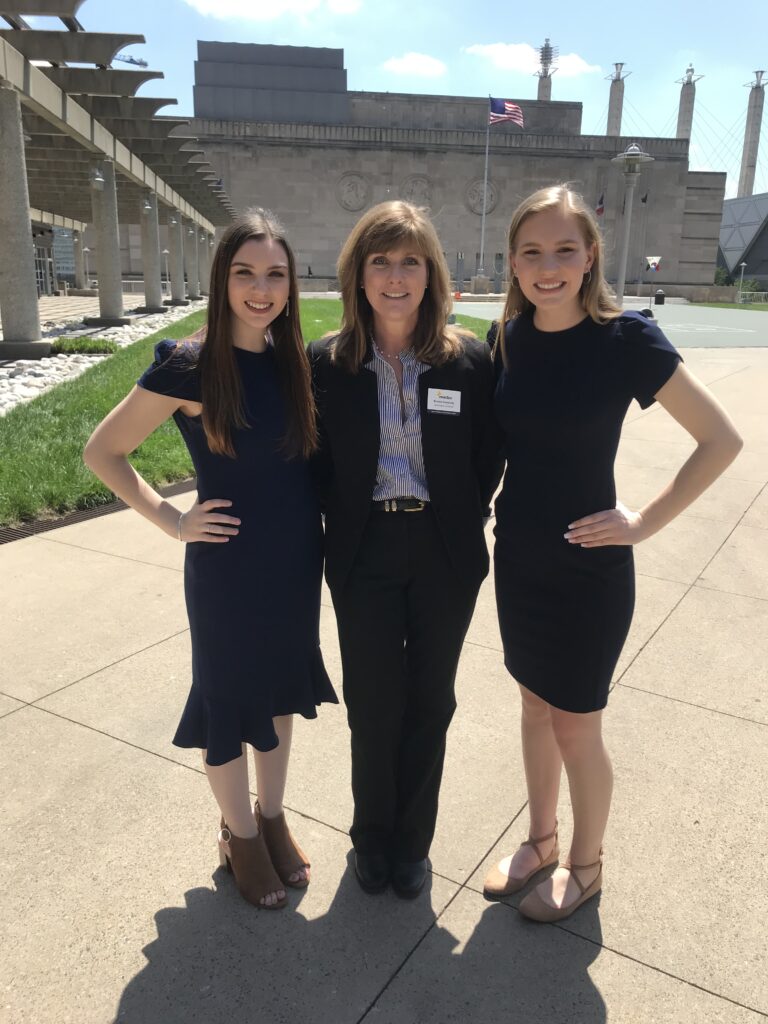 Amanda Corp ’20, Professor Bonnie Kennedy, Miranda Benoit ’22. This photo was taken in May 2019. Corp and Benoit were the only female members of the Salve Regina team in 2019.

“The students on the Salve Regina Enactus team are the very best students I have ever worked with in all of my years in higher education and in my 24 years advising Enactus teams around the country,” said Johnson, lecturer in Salve’s Business and Economics Program and program coordinator in the MBA and management program. “They say ‘yes’ to every challenge, and they succeed at everything they do.”

Salve Regina’s Enactus is only in its second year, having won Rookie of the Year honors at its first national competition. “It only happened because of the effort put forth by the men and women on the team,” Johnson said. “I literally did nothing other than giving them the freedom to pursue their passion. The students ran the projects, they wrote the reports and speeches, and they created the videos. I just watched and smiled.”

To win an award, any award, with Enactus is incredibly challenging, Johnson said, because of the number of teams represented. Founded in 1975, Enactus encompasses 37 countries from around the world. The U.S. operates the largest division of Enactus, with 378 universities and 7,821 student participants.