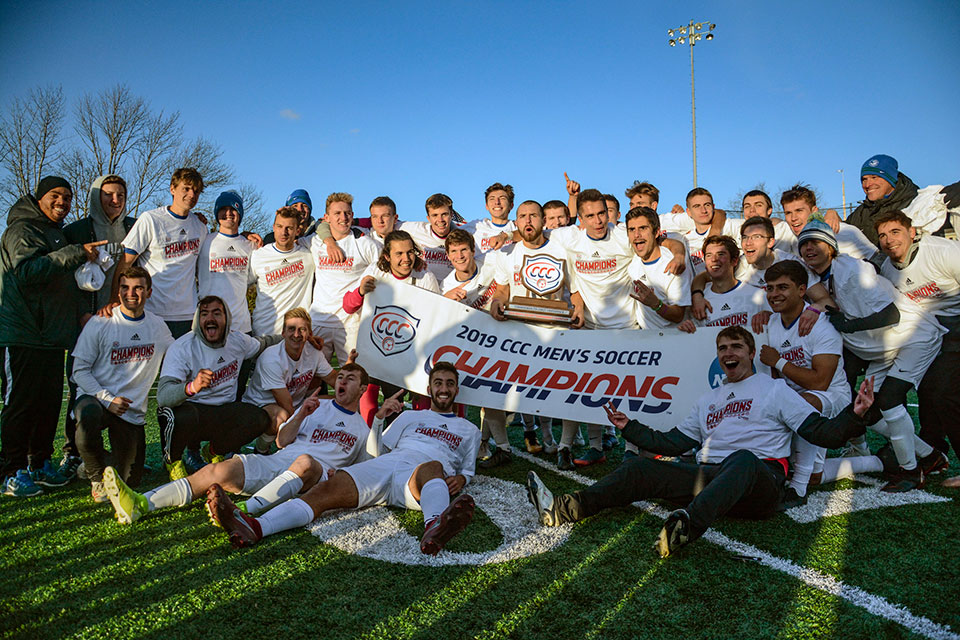 Following a scoreless first half, Endicott’s Evan Couchot put the visitors on top with a penalty kick less than a minute into the second. Salve Regina (14-4-3) got the equalizer less than four minutes later. Captain Noah Medeiros ’20 picked a perfect spot for his free kick 20 yards out on the top, but Endicott keeper Zach Regalbuto guessed correctly to make a spectacular save, knocking the ball over his crossbar for a Seahawk corner kick.

After the corner was booted out of bounds, fellow captain Evan MacDonald ’20 tossed in to classmate Dana Sundell ’20, who touched it back to MacDonald. The Seahawks’ leading scorer gave a cross to Alessando Oggiano ’22, who headed in his team-leading 11th goal of the season.

Endicott regained the lead in the 67th minute when Gabriel Chaves danced along the goal line in the corner to create space for a cross to center that his classmate William Poreda finished into the back of the net for his sixth of the season.

Less than two minutes later, Oggiano notched his 12th goal of the season after getting a deflection from Dylan Sock ’23 on a shot from John Reichert ’23. No more goals were scored in regulation or the first 10-minute overtime period, with both Regulbuto and his counterpart Seth Wolins ’23 denying several scoring opportunities.

Oggiano was in position for a hat trick on the game-winning goal, and that position forced an Endicott defender to attempt a header to clear, but it wound up escaping Regulbuto for the game-winner with 2:53 left in the second overtime.

Salve Regina earns its fourth title and third automatic bid to the NCAA Division III men’s soccer championship, and will play Rowan University in the first round. The match will take place Saturday, Nov. 16 at University of Mary Washington in Fredericksburg, Virginia as part of a four-team regional. Game time is approximately 1:30 p.m.