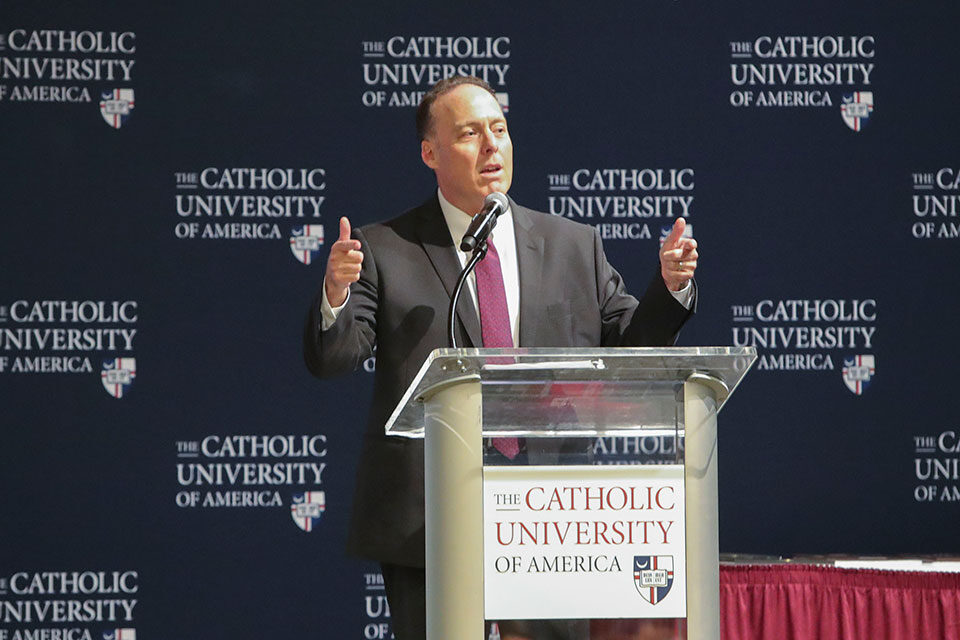 Sullivan replaces Jody Mooradian, who retired after serving in the position since 2016.

“I have long thought highly of Salve Regina and have imagined it to be a uniquely special place,” Sullivan said. “By emphasizing the concepts of compassion and empathy, the University’s mission creates an environment in which the health of the community, or how community members care for one another, is prioritized each day.”

With more than three decades of higher education leadership experience in athletics and student affairs, Sullivan said athletics plays a vital role in establishing a sense of institutional togetherness and can provide examples of aspirational behavior for many to emulate. “Both elements make an opportunity such as this one professionally exciting and personally impactful,” he said.

In his new position, Sullivan will oversee all aspects of Salve Regina’s NCAA Division III intercollegiate athletics program, which encompasses about 550 student-athletes competing in 20 varsity sports. He will guide the University as it officially joins the New England Women’s and Men’s Athletic Conference (NEWMAC) in July. Salve Regina becomes the NEWMAC’s 12th core member and will begin participating in conference play during the 2023-2024 academic year.

“Sean is a seasoned athletics director, and he brings a wealth of knowledge to Salve,” said Dr. Letizia Gambrell-Boone, vice president for student affairs. “As we prepare to enter the NEWMAC and elevate our student athlete experience, we couldn’t be more thrilled to have him join our community.”

Sullivan said working with Salve Regina through its shift into a new conference can be looked at as the professional challenge of one’s career in athletics. “The NEWMAC is one of the preeminent Division III conferences in the country,” he said. “The league championship-winning level of play in virtually every conference sport is of the highest national caliber.”

Sullivan said Salve Regina athletics can become a new kind of standard bearer as few other schools can offer such a challenge. “To play at such a level is what the very best DIII student athletes aspire to experience as they enter the college ranks,” he said. “To strive to excel in this specific competitive environment, all while maintaining what makes Salve unique, its commitment to the Mercy values, makes this opportunity both demanding and rewarding.”

“Division III student athletes are, without question, some of the most inspiring and dynamic young people I have had the good fortune to work with throughout my career,” he said. “Their willingness to visibly put themselves in a position in which they may be judged (after a win or loss), and to do so because their passion for their sport demands it, is beyond admirable. They are true role models. By having to exhibit selflessness, commitment and courage each day, all while navigating the multi-faceted demands of their unique student-athlete lives, only reinforces how so many of our DIII athletes are indeed the ‘finished product’ schools like Salve hope to produce each year.”

Sullivan earned a bachelor’s degree in 1991 from the University of California-Santa Cruz, where he played soccer for four years and was named a regional All-American. He earned a master’s degree from the University of San Francisco in sports and fitness management in 1996 and a graduate certificate in leadership for change from Boston College in 2004. He completed his doctorate in higher education administration in 2017 from Northeastern University.