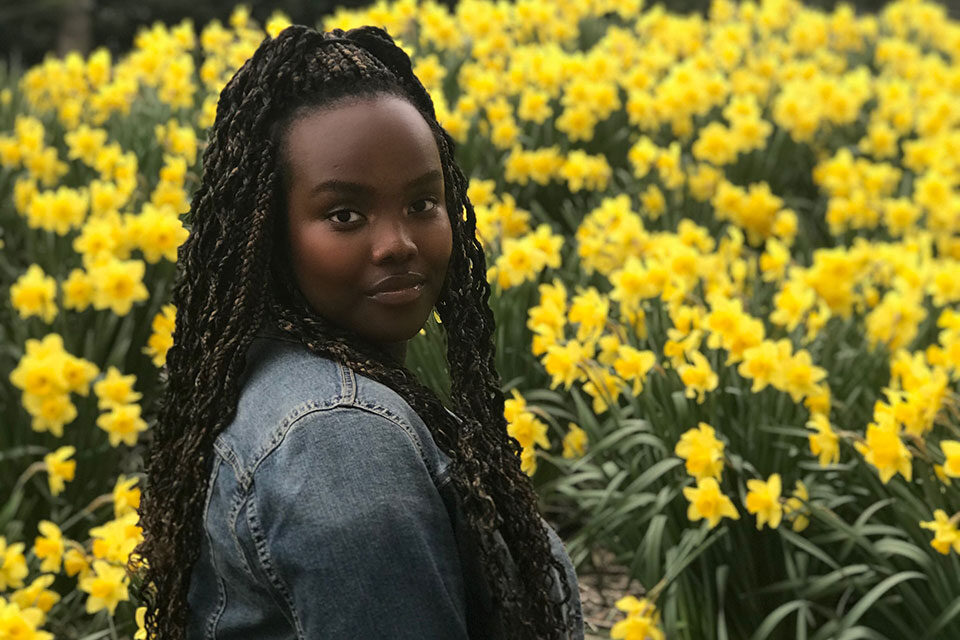 Belise Abane ’22 has made her mark on campus in myriad ways. From holding an executive board position in the Student Government Association to being an active member in the Black Student Union to devoting her time to her peers as a resident assistant, the psychology major has kept herself busy during her four years at Salve Regina.

Abane believes that all the lessons in the classroom and in self-discovery will serve well her as she returns to Rwanda, her country of origin. Because after graduation, Abane is joining the Peace Corps. There, she will be located in Rwanda in a program centered around the health and wellness of newborns and mothers.

Learning to leave comfort behind

Abane’s journey to Salve Regina was an unexpected one. She had live din Rwanda for the first 13 years of her life, but in high school, she found herself in Vermont. Abane had envisioned herself going to a school close to Vermont, but Abane chose to keep Salve Regina on her radar. As applications were sent out and admissions letters were received, Abane was torn between the comfort of a school close to home and the love she had for Salve Regina.

“I came to the campus, and it was indescribable. It felt like home, and I just loved it, especially since I love the water,” Abane explained. “It felt similar to my little hometown back home.”

Abane explained a life-changing conversation she had with her father, whom she feels is her greatest role model. He gave her the advice to go far and experience what she did not already know, and she knew that she would have the support of her family no matter how far she traveled.

The support of her family was reinforced when as a student she decided to change paths from a biology to a psychology major. Abana entered the University with her sights set on being in the medical field. The more classes she took, the more she found herself wanting to make the leap to psychology.

“I think one of my biggest achievements was coming to understand the person I am and where I want to be in life,” Abane said. “I was figuring out what I wanted to do in life and figuring out that it’s okay to not know, too. I eventually got to a place where I know I’m happy.” 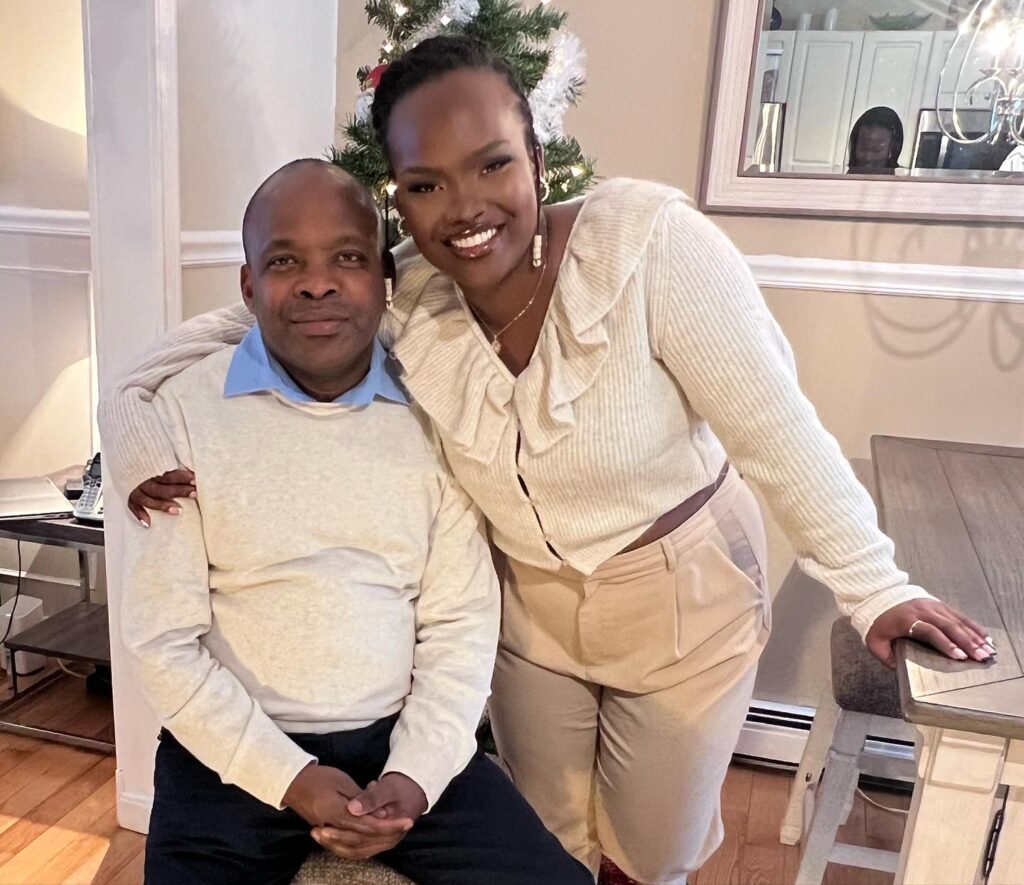 Belise Abane with her father.

Abane credits her interest in wanting to join the Peace Corps and care for others to her father. Growing up in Rwanda until age 13, Abana describes her father routinely going on trips with non-governmental, nonprofit organizations. Her dad brought back gifts and stories of people thanking him for his work, and Abane knew the value and gratitude that derives from helping others. As Abane got older, she would join her dad for a few days to help, too.

When Abane wanted to return to Rwanda, she knew to follow in her father’s footsteps. She also wanted to use knowledge of how to care for oneself mentally and physically from her experience in psychology while at Salve Regina. Because of this, Abane chose to pursue the Peace Corps, where she would be in a program centered around the health and wellness of newborns and mothers.

“The health program is where I wanted to be, especially with mothers and little children, because that is my happy place,” she said. “I think that from my own personal experience, I know in my country postpartum depression is not something that is really recognized. It’s something that I want to work with. That program was the golden opportunity for me working with mothers … and the ability to change the physical and mental health of new generations.”

As Abane makes her return to her first home in Rwanda, she is eager to get to work. Abane often thinks about the carefree attitude that is ubiquitous with Rwanda, and she knows that the easy-going cultural environment will foster the multitude of talents and hobbies she has. After nearly a decade away from home, she is ready to delve back into her favorite homemade dishes, see her father’s side of the family and see how much her little cousins have grown.

After her time in the Peace Corps is finished, Abane hopes to remain in Rwanda and continue her career there or continue furthering her education. However, her years spent internationally provided so many opportunities for growth, and they will be something she values for the rest of her life.

Abane also feels she was able to spend her four years at Salve Regina discovering herself and growing to know that an inner connection to herself is the most important compass for her path forward.

“There’s an important aspect to being able to listen to yourself,” Abane said. “I’ve learned to listen to myself — my body and my mind.” 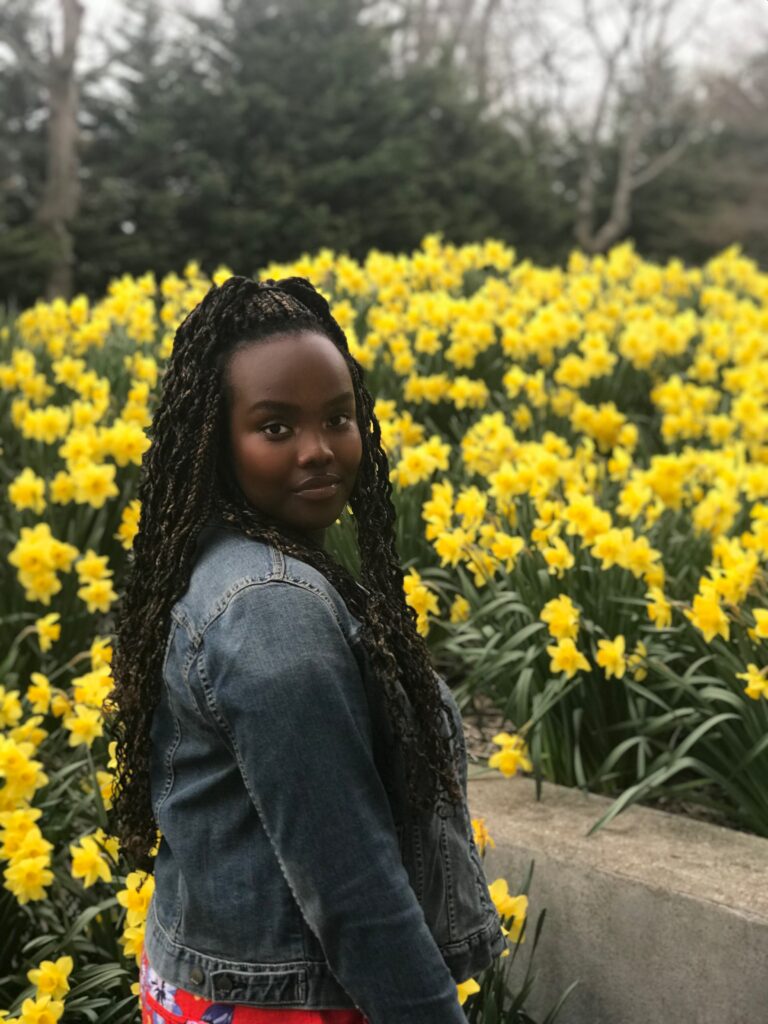