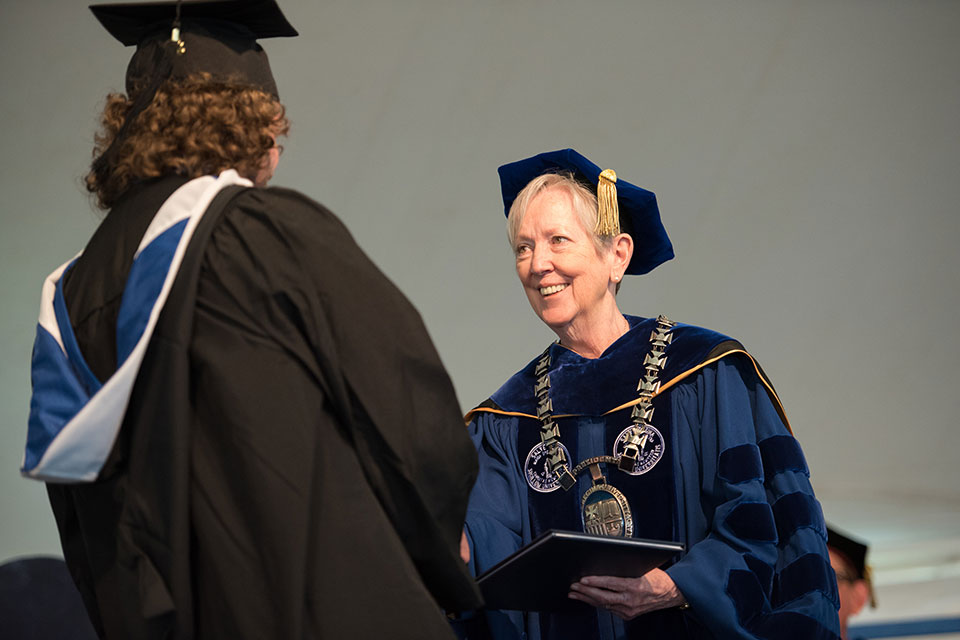 President Jane Gerety, RSM, who is retiring in June after 10 years at the helm, will be awarded an honorary doctorate and will offer her reflections when the University community gathers on Sunday, May 19 to celebrate its 69th Commencement.

Sister Jane joined Salve Regina’s board of trustees in 1995 and, among her leadership efforts to advance the institution, chaired its committee to rewrite the University’s mission statement re-affirming its mercy mission and Catholic intellectual tradition. Inaugurated as Salve’s seventh president in 2009, she worked tirelessly during her tenure to introduce several new academic programs, expand student scholarships, and oversee a major renovation to the University’s flagship academic building. But first and foremost, Sister Jane was known across the University community as a student’s president.

“I’ve loved being part of the spirit of Salve, which I really think is imbued with mercy,” she said. “I hope I’ve helped to cultivate that spirit.” When she announced her retirement, she told students: “You have changed in your time at Salve and so have I. Looking forward, we all share a bit of fear for the unknown and also hope for the excitement that is to come.”

During Sister Jane’s presidency, Salve Regina launched a doctoral program, a master’s program and a fully online RN-BS program in nursing, a master of fine arts degree program in creative writing, expanded its programs and experiential learning opportunities in business, supported faculty-student research partnerships in the sciences and established a campus in Warwick to serve the academic needs of working adults seeking graduate and continuing education opportunities.

Sister Jane oversaw the $26 million renovation of O’Hare Academic Building, which was completed in 2017. The project added 23,000 square feet to the building and provided critical updates to educational spaces, including establishing a collaborative learning environment and renovating laboratories for programs in science and nursing. The University opened a digital forensics lab and incorporated cyber education across the curriculum.

Sister Jane initiated a major campaign, “Scholars and Scholarships,” to reach 100 gifted, endowed funds valued at more than $15 million to support students, faculty and research. More than $10 million was raised for the O’Hare Academic Building project, including a challenge grant to alumni that produced more than $1 million and the highest alumni participation for any building project. Campus buildings and programs were dedicated and named with philanthropic support, including the Rodgers Family Department of Nursing, the Noreen Stonor Drexel Cultural and Historic Preservation Program, the Lily Haseotes Bentas Center for business and nursing, and the John E. McGinty Lecture in History. Over the last 10 years, Salve Regina’s annual Governor’s Ball for Scholarships nearly doubled in support, raising more than $500,000 in 2019 alone as the University’s signature event.

In recognition of Sister Jane’s 24 years of commitment to Salve Regina, trustees voted to dedicate Gerety Hall at Wakehurst, and will invite the University community and the public to gather for a celebration on Thursday, May 9 at the student center being named in her honor. A hub for student activities with lounges, recreation areas and classrooms, Wakehurst houses the offices of Community Service and Student Activities, the Student Government Association, the Campus Activities Board, and various faculty offices.