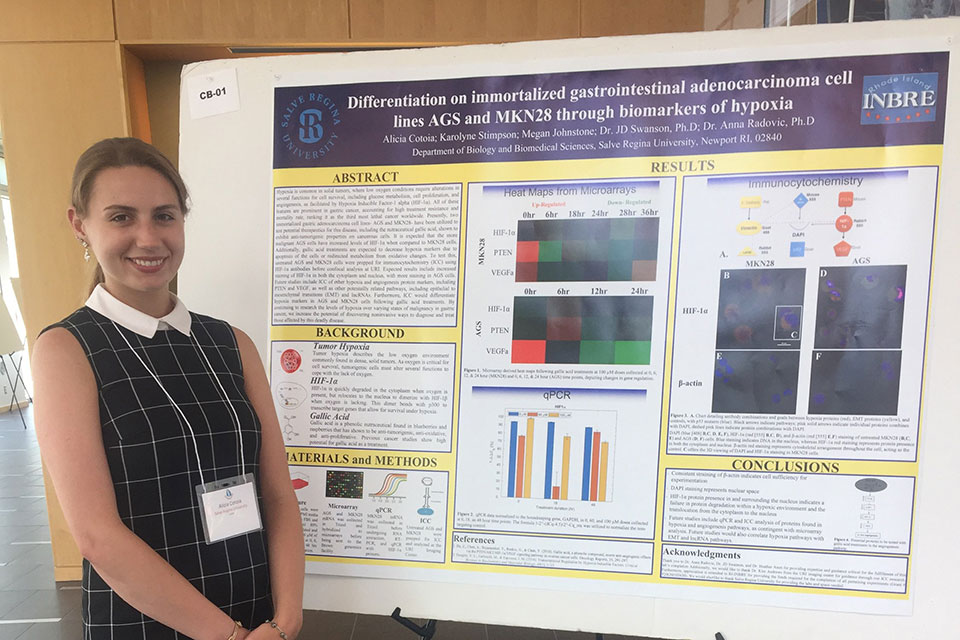 Editor’s note: The 10th annual SRyou Student Exposition, an all-day event featuring the work of Salve students, will be held Wednesday, March 27. In the weeks leading up to the exposition, SALVEtoday and the SRyou planning committee are featuring a series of presenter spotlights.

Alicia Cotoia ’19, a biology major with a minor in chemistry, will present a poster on her summer undergraduate research fellowship, “Differentiation on immortalized gastrointestinal adenocarcinoma cell lines AGS and MKN28 through biomarkers of hypoxia.”

Cotoia writes: “Solid tumors, such as those found in gastric adenocarcinomas, are known to have hypoxia microenvironments, with hypoxia being heavily decreased oxygen levels. Cancer cells activate specific pathways and up/down regulate certain genes to help cell survival during hypoxia, and previous studies have indicated that increased cancer aggressiveness correlates with increased hypoxia levels. Therefore, it is expected that more advanced cancers will exhibit increased changes in gene expression related to the hypoxia pathway.

“With the two cells lines being compared – AGS and MKN28 – AGS is the more aggressive of the two. Therefore, my research conducted over the summer was under the hypothesis that specific genes, such as HIF-1a and VEGF, would be detected at higher levels in AGS compared to MKN28. While these findings provide a significant pathway that could be targeted in the future for cancer treatment, they also serve as markers for diagnosis and prognosis, indicating cancer severity and survival rate at the time of detection.”