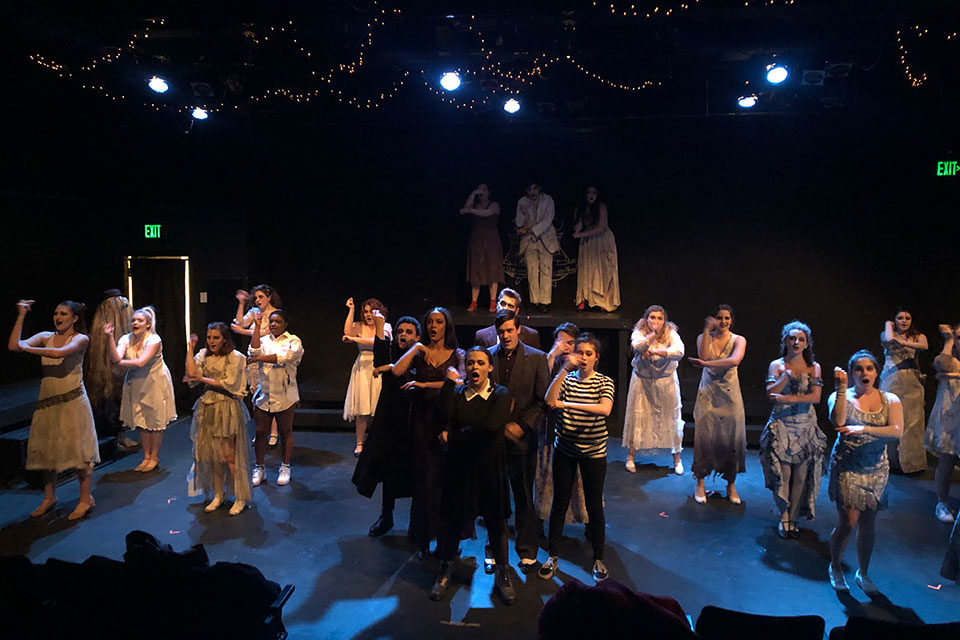 StageFright, Salve Regina’s student-run theater club, is putting on “The Addams Family,” directed by Jillian Brooks-Duval ’20, on Friday, March 6, at 7 p.m; Saturday, March, 7 at 7 p.m.; and Sunday, March 8, at 2 p.m. and 7 p.m. at the Megley Black Box Theatre. The production is entirely lead by students, including its director Brooks-Duval.

“This is my first time directing a show, which is very exciting,” said Brooks-Duval. “I feel very proud.” 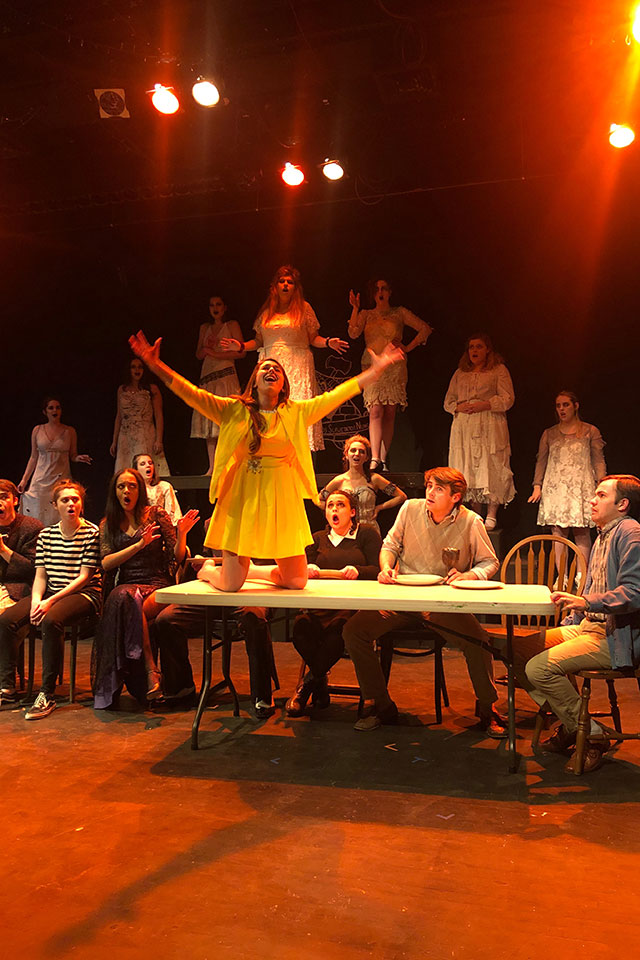 The Addams’ began their wacky adventures as a comic by Charles Addams in The New Yorker in 1938. Family’s across America fell in love with the Addams’ peculiar lives, and their popularity gave birth to “The Addams Family” television series. It was one of the most popular shows in the sixties with one of the most recognizable theme songs in television history. In 1991, they returned to the big screen in theaters across America, and the infatuation with the cooky clan was reignited.

Now, it finds its way to the stage. The Addams Family musical takes place after the movie, and it centers on the Addams’ dark and twisted daughter Wednesday, who is now eighteen and has shocked them by falling in love with a normal boy named Lucas. The Addams must maneuver their way through the turbulent ups and downs that come to pass when Wednesday invites Lucas and his family over for dinner. 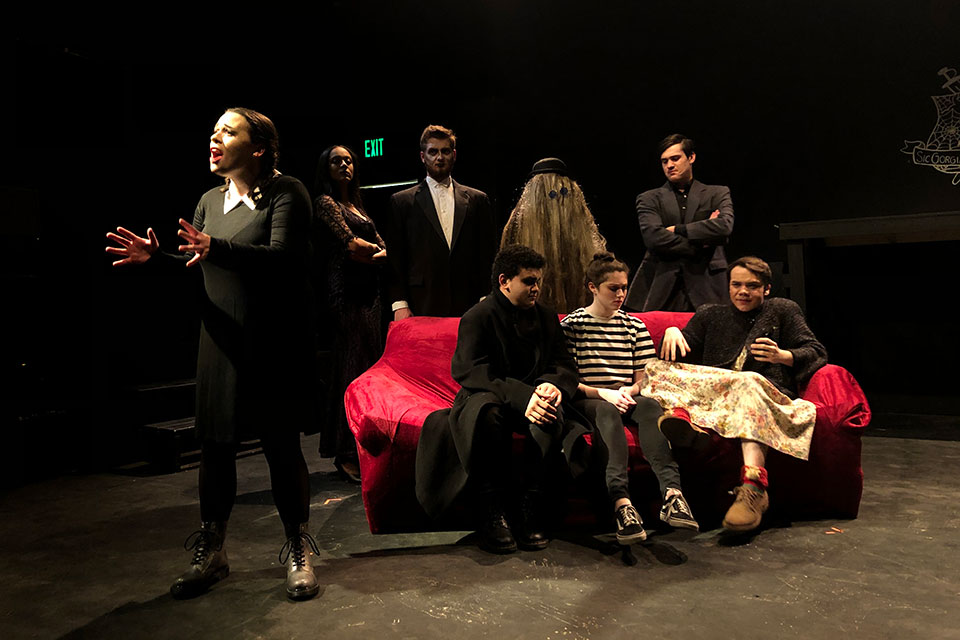 Brooks-Duval has been working on getting the details together since the summer of 2019. StageFright cast the show in October 2019, but the students then began putting the show together once they arrived back in January 2020. The cast involves over 30 students, and there’s about 45 people in the entire cast and crew.

“Theatre is one of those things where you work so hard and you work so long for four performances,” said Brook-Duval. “It’s been a group effort, and I just want everyone to see these students shine, because they’re so talented.”

StageFright is open to any student interested in theater even if they are not majoring or minoring in the subject. Each year, StageFright produces at least one student-run production, festivals and theater workshops that focus on different aspects of the art form. StageFright also plans field trips to professional and university theaters in the area and encourages students of all majors, no matter what their class schedule, to participate in any way they choose, including directing, performing and designing.

Cassandra Kall ’22, a nursing major, joined StageFright her sophomore year. While she had been a stage manager in high school, she had never acted before, so she felt that joining StageFright was a great way to get involved and try theater again in a friendly environment. “The Addams Family” is the first play she’s ever been in as an actor as part of the ensemble.

“It’s been a lot of fun, just getting to know everybody,” said Kall. “I’ve always … wanted to, but I never really got the opportunity to like step out and go for it, so it’s been … really good to just … be in a comfortable environment and be able to do something I really enjoy.”

Mary Melo-Severino ’23, who is majoring in administration of justice and minoring in theater, is playing the part of Morticia, the mother of the Addams family. This is Melo-Severino’s first experience with StageFright as a freshman. She has enjoyed being part of StageFright and has found it very rewarding to get to know everyone involved.

“A lot of people only see the finished product, but there is a lot of handwork that goes in from the director, choreographer, stage manager, etcetera,” said Melo-Severino. “This being a student-led production, I have witnessed the love and dedication that goes into putting on a production.”

Cost of admission is $5. For more information, contact sru0stagefright@gmail.com. 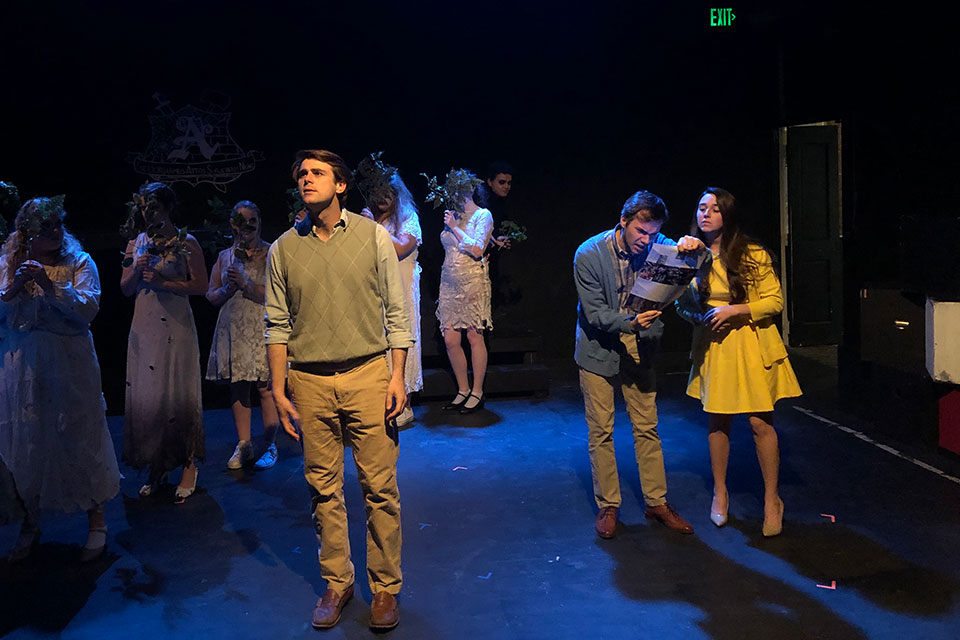