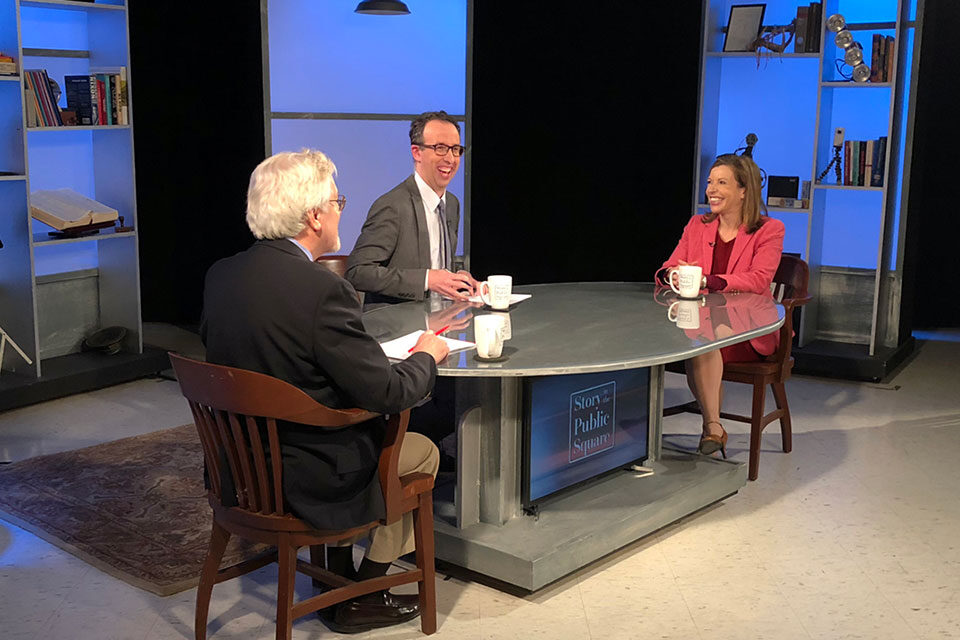 In a year that began and ended with hotly contested politics, the impact of the pandemic on every aspect of American life — jobs, families, politics, communities, health and lives — has been named the 2020 Story of the Year by the Pell Center for International Relations and Public Policy. The topic was explored in depth on an episode of the nationally syndicated PBS television series and podcast, “Story in the Public Square.”

Since 2013, the Pell Center has announced the Story of the Year, identifying a public narrative that has had the biggest impact on public affairs in the previous 12 months. 2020 is a year no one will forget any time soon — although many might want to. From the impeachment trial of the president, to the pandemic and the 2020 election, this year has seen more than its fair share of important narratives.

Dr. Evelyn Farkas helped make sense of them all as she joined hosts Jim Ludes and G. Wayne Miller to discuss the 2020 Story of the Year. Farkas is one of the nation’s premier voices on American foreign policy and geopolitics, and one of the nation’s most-trusted experts on U.S.-Russia relations. As deputy assistant secretary of defense for Russia, Ukraine and Eurasia, she was the U.S. Department of Defense’s top Russia expert under President Barack Obama. Farkas advised three U.S. Secretaries of Defense during her tenure at the Pentagon and was responsible for policy toward Russia and the surrounding region.

Watch the Pell Center’s 2020 Story of the Year

The Story of the Year began in late 2019 with reports of a strange new pneumonia in Wuhan, China. By the middle of March 2020, American governors were shutting down their economies, closing schools and warning constituents of dark days ahead — even while the president of the United States vacillated in his public approach to the seriousness of the threat. After spring cases peaked, President Trump was quick to urge states to re-open their economies and to get people back to work.

In the months that led up to the election of 2020, the country was a battleground for two narratives: one emphasized the risk of the virus and the failure of the Trump administration to protect either lives or the economy.  The other narrative said the worst of the pandemic was behind us and that the United States government, led by President Donald Trump, had responded magnificently.

The American public rendered its judgment on those narratives in a closely contested election, even as the virus surged. As of this episode’s taping, more than 267,000 Americans have died from this virus, even as hope emerges for promising vaccines.

“Story in the Public Square” broadcasts each week on public television stations across the United States. A full listing of the national television distribution is available at this link. In Rhode Island and southeastern New England, the show is broadcast on Rhode Island PBS on Sundays at 11 a.m. and is rebroadcast Thursdays at 7:30 p.m.

An audio version of the program airs on Saturdays at 8:30 a.m. and 6:30 p.m., as well as on Sundays at 3:30 a.m. and 11:30 p.m., on SiriusXM’s popular P.O.T.U.S. (Politics of the United States), channel 124. “Story in the Public Square” is a partnership between the Pell Center and “The Providence Journal.” The initiative aims to study, celebrate and tell stories that matter.

Featured photo from a “Story in the Public Square” program from 2017.