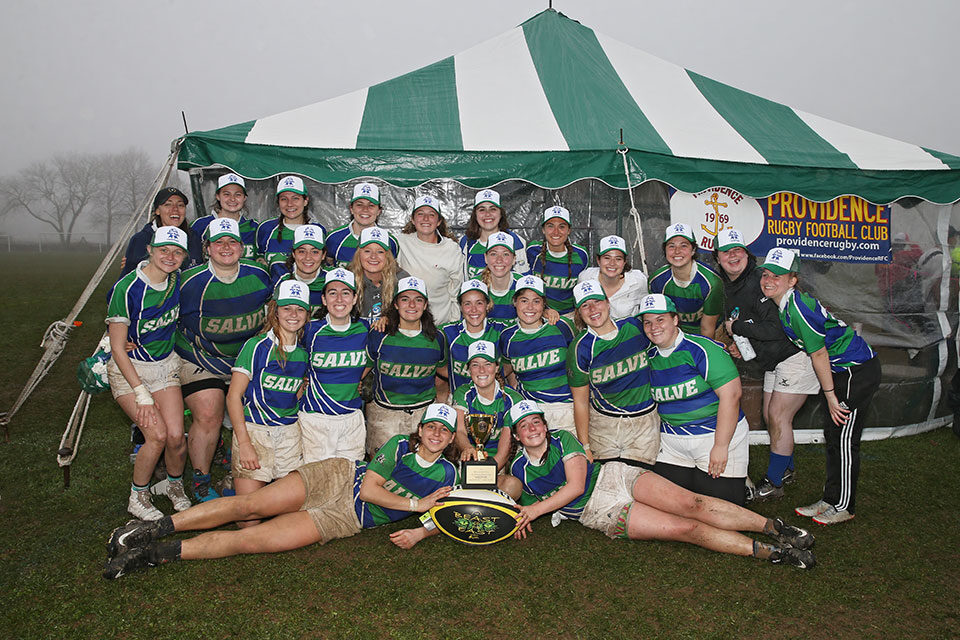 For many college students, the end of high school marks the end of their involvement in organized athletics. The intense commitment of varsity sports is not for everyone, but club sports offer students the opportunity to make friends, explore new activities, stay active and have fun.

While club sports can offer a competitive atmosphere, they are inclusive programs that do not hold try outs or make cuts. The club sports offered at Salve Regina fall in between varsity sports and intramurals, and the clubs compete on an intercollegiate level, but they do not compete under the National Collegiate Athletic Association (NCAA) guidelines. Club sports are open to all full-time and fifth-year students, including varsity athletes who are out of season. In addition, no experience is required to join a club sport.

Read below for more information on every club sport that Salve Regina offers. 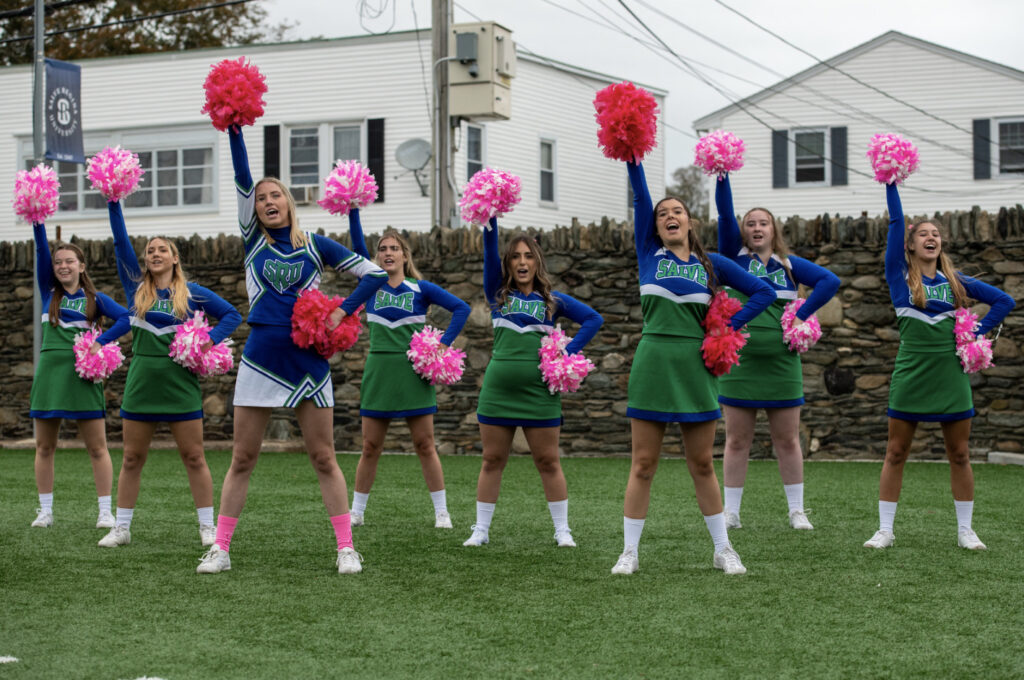 The cheerleading program is coached by Dawn Hahn, office and club sport coordinator for athletics, who started the program in 1999. Over the decades, the roster has doubled as more and more students have become interested in the program.

“I want every team member to have fun doing what they love and to be a part of a program that allows for growth throughout the season,” Hahn said.

The team started out only cheering for home football games, but they were added to men’s and women’s basketball games in the 2000s, and they have been a part of the game day atmosphere ever since.

Ashlee Quilliam ’23, a double major in elementary and special education, is the captain of the cheer squad. Quilliam comes from a competitive cheer background, and she is thankful that the club gave her an opportunity to make friends and continue her passion for cheerleading.

“Joining a club sport allows me to still work at my passion for cheer, but it never gets in the way of my studies,” said Quilliam. “With our close-knit team, I’ve been able to create friendships that will last a lifetime.”

Currently, the cheerleading team is non-competitive, meaning they don’t compete against other cheerleading teams, but Hahn notes it may be considered if time and space allow for it in the future. In the meantime, students, faculty, staff and community members can come to football and basketball games and support the Seahawks as the cheerleading team leads the crowd with cheers and stunts. 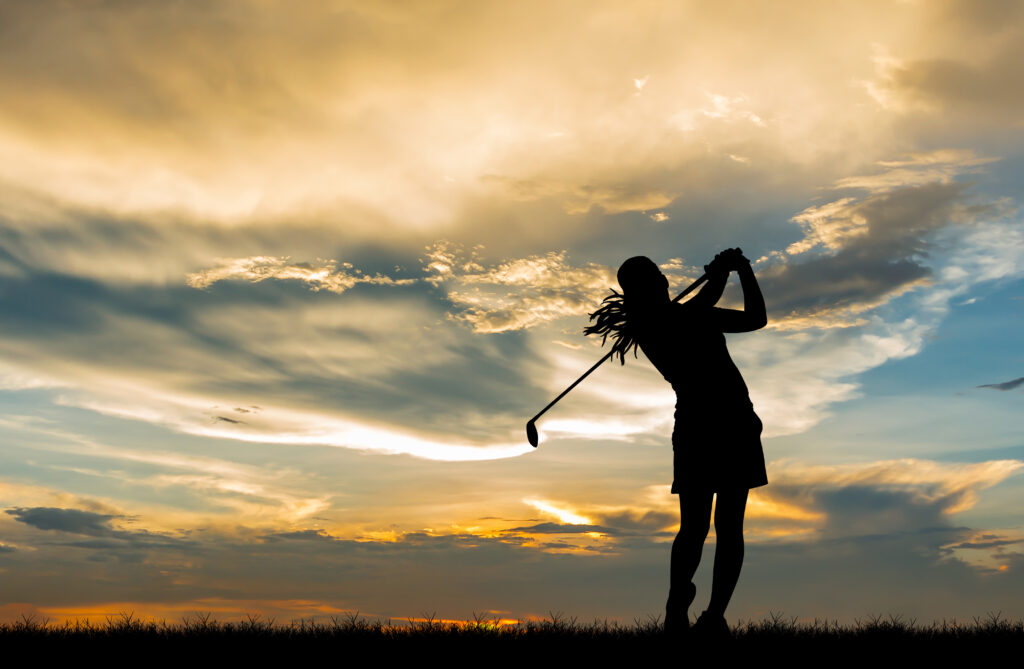 For students who are interested in pursuing or continuing their passion for golf, the golf club has the pleasure of welcoming their new coach, R.J. Soares. Soares is currently working as the professional for Newport indoor golf. He has an extensive background playing all over the country with some of the best teaching professionals in the world, and he hopes to bring that level of passion and skill to Salve Regina.

Soares has worked with players of all levels of experience, from beginners to mini-tour players. The golf club offers an excellent opportunity for Salve Regina students to come together and enjoy the sport in a low-pressure environment. 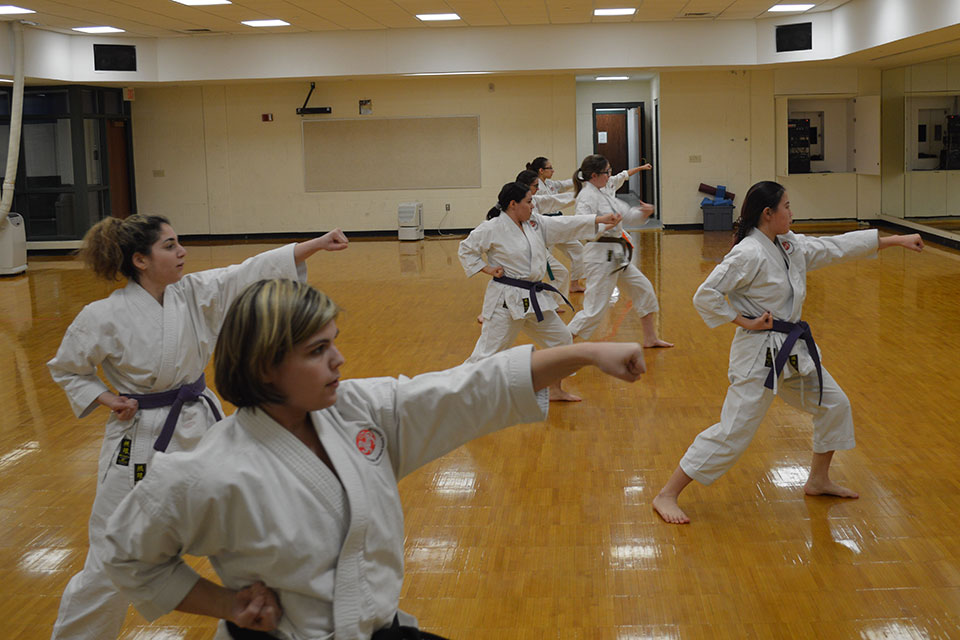 Salve Regina’s Shotokan Karate club was formed in 2012 by the club’s first advisor and sensei, Dr. J.D. Swanson, a former associate professor of biology and biomedical studies. Since the club’s origins, several students have earned the rank of shodan, or first-degree black belt, under Dr. Swanson’s diligent instruction.

More recently, the club has solely been student-led. In fact, the club has earned both regional and national titles in collegiate tournaments under the leadership and instruction of its very own students. Its current advisor is Dr. Heather Axen, associate professor of biology and biomedical studies, and the current student president is Allison Nickerson ’22, a nursing major.

“Any student can join without having any prior experience in martial arts,” Nickerson explained. “While training, safety is our first priority. Karate trainings are taught by a sensei or most qualified individual in three major focuses: Kihon, (basics), Kata (forms), and Kumite (sparring).”

There is a color system of ranks, denoting one’s level of training, according to Nickerson. They are white, yellow, orange, green, purple, brown and black. Within black, there are 10 other “dans” or levels of black belt. Most people who join the Karate Club their freshman year can train consistently to attain their advanced brown or black belt.

“Training in karate is a fun way to exercise the body and mind while adopting a great group of friends and teammates who are reliable both inside and outside of the dojo,” said Nickerson. 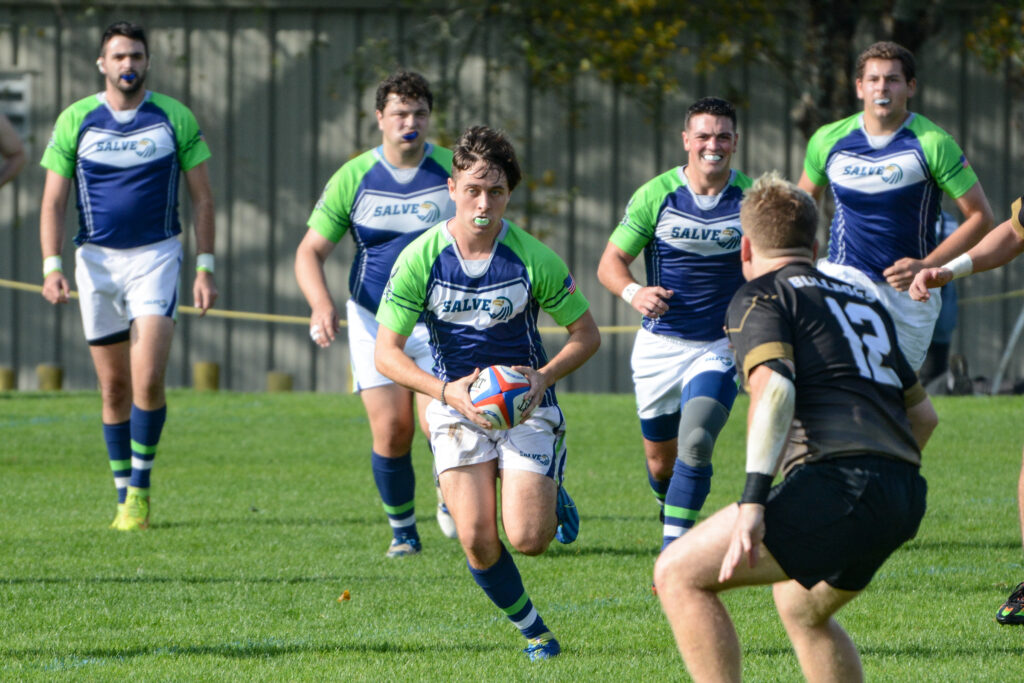 Rugby is a growing sport in the United States, and much of this growth is occurring on college campuses like Salve Regina University. The sport also has a vast international community. Joseph Goff, the head coach of the men’s rugby team, emphasizes the sense of community that club sports can provide.

“You could go anywhere in the world, join a local rugby club, and they will help you find work and community,” Goff said.

Both men’s and women’s rugby clubs offer student athletes a chance to play on 15 versus 15 teams in the fall and 7 versus 7 teams in the spring. The difference between the two styles of play refers to the number of players on each team and the amount of time that the games last, according to Goff. “Sevens” is more of a tournament style, while “fifteens” is a typical match style of play.

One misconception that people often have about rugby is that it requires a lot of physical size and strength, but Goff noted that it’s actually a game of finesse and skill. He also emphasized the point that students do not need prior experience to join a club sport, as over ninety percent of rugby players at Salve Regina have never played before they join the club. 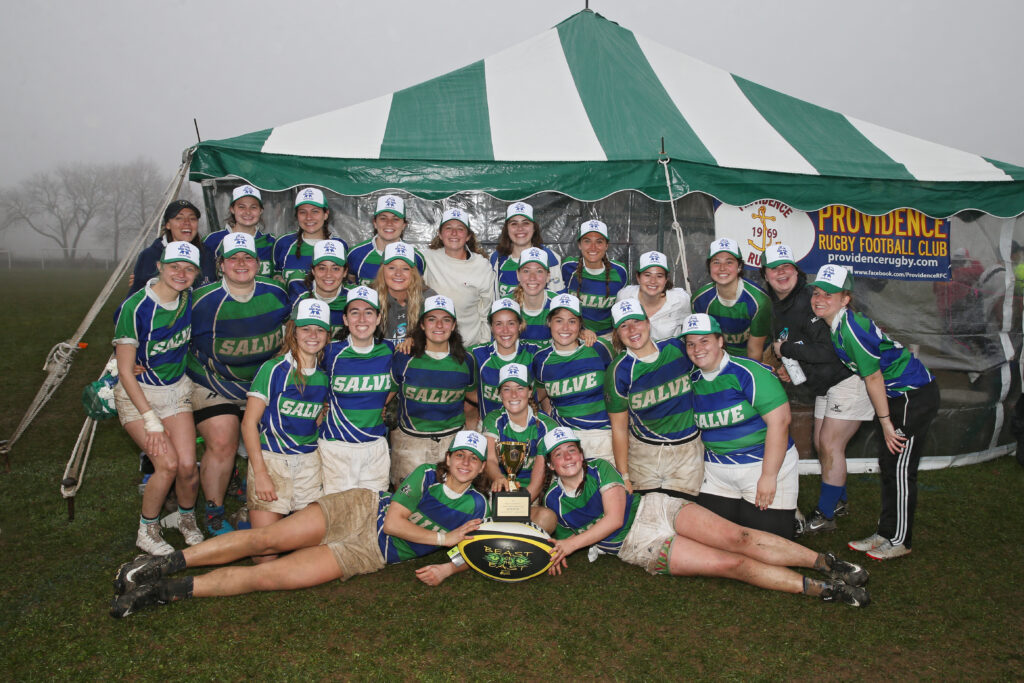 The women’s rugby program exemplifies the tremendous possibilities that club sports in general have for growth. The club was started in 2016, and by 2018 the team placed in the top three at nationals. This past season, the team was in the top 15 after taking two seasons off due to COVID-19.

“That is big for a small university and club team like Salve women’s rugby,” said Ovidio Matos, the women’s rugby head coach. “It made me very proud to see how much the team had excelled throughout all adversity faced.”

Matos also speaks to the strong sense of respect and camaraderie that encompasses the sport of rugby and the incredible bonds that can be made through the club.

“As a Salve Rugby Alumni, some of the deepest relationships I hold are with my rugby teammates,” he said. 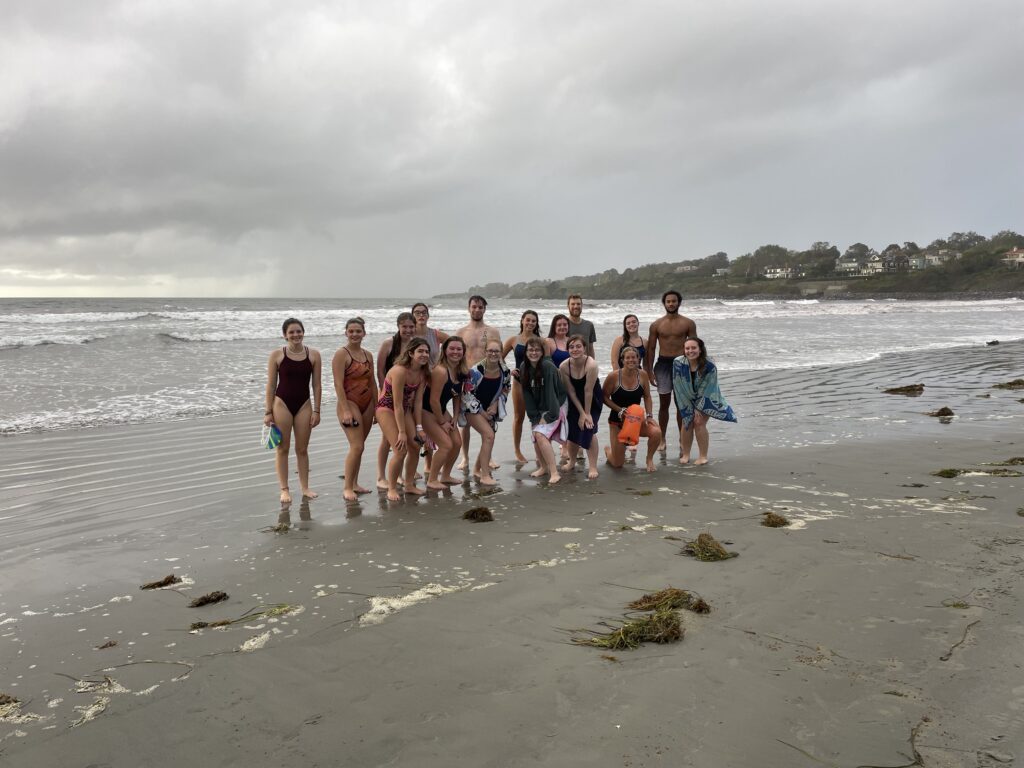 The swimming club was started in 2012 through the interest of some students who loved to swim and wanted it to be a part of their Salve Regina experience. They advertised an organizational meeting, and 36 members — men and women who had varying degrees of swim experience — joined for that initial year.

“We had some swimmers that were extremely skilled and could easily swim for an NCAA program and others that had never gone off starting blocks before,” said Pam Heroux, associate dean of admissions coordinator of athletic recruitment. “The more experienced swimmers helped those that were learning. It was awesome, and it is how we still function today.”

Swimming –which is called Salve Swim — is now headed up by coach Apryll Steen, and it’s is open to everyone. The club swims in a five-lane pool, and they break out the lanes based on where they are skill wise at so someones is always swimming with same-level swimmers. This allows everyone to get a good workout in.

“Swim is a unique sport in that the only true competition is within your own self,” said Heroux. “You can blend your physical and mental health by participating. You truly get out what you put in.”

Unlike varsity teams, club sports like rugby do not meet for practice every day. For example, the women’s rugby program only practices three times a week around the same time, and because of this students can plan their schedules easily around practices. This flexibility allows students to join other clubs and explore their interests further beyond athletics.

Rugby team members, as well as other club sports members, also have executive board positions like other non-sports related clubs, and the student athletes are responsible for administrative duties like funding, games, travel, social media, referees, reserving fields, etc. All of these opportunities provide valuable lessons for students that will apply to life after college.

Nickerson, part of karate, added that a sports club is a good environment to learn new things, as well as a safe environment for when things get overwhelming. Sports clubs offer a place to direct focus, relax and destress.

“Values taught in karate such as character, respect and endeavoring can empower you beyond the dojo,” Nickerson said.

It’s still early in the semester, so it’s not too late for students to explore the opportunities offered by club sports by engaging in athletics, making friends and exploring new activities. The Salve Regina club sports programs in swimming, karate, cheerleading, golf and men’s and women’s rugby are eager to welcome new students this spring.

For more information on how to join a club sport, go to their website.