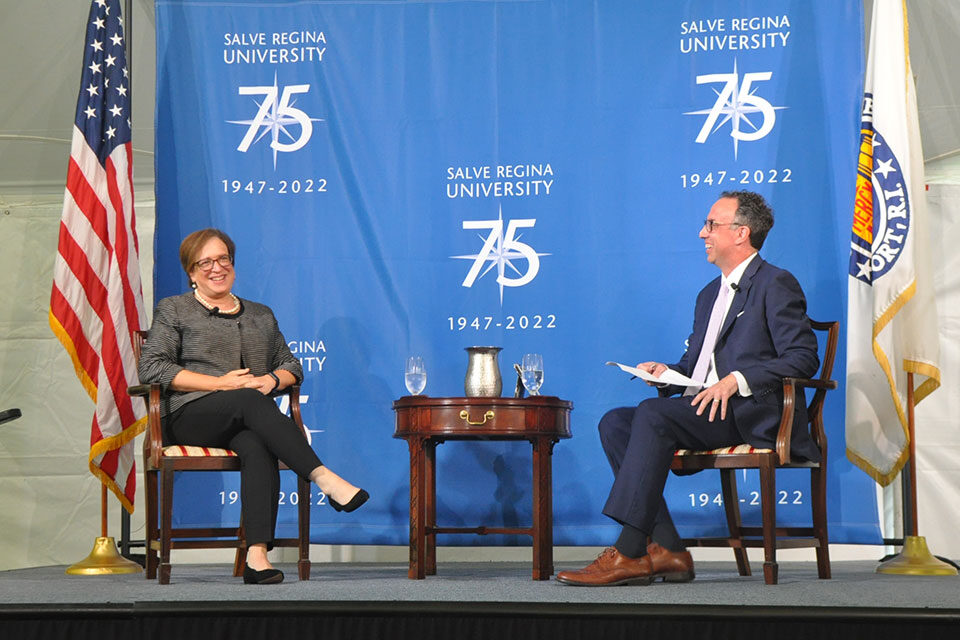 The Hon. Elena Kagan, associate justice of the U.S. Supreme Court, talked about the struggles of a deeply divided nation, the need for clear distinction between policy and law, public confidence in the Court, and the importance of precedent during a wide-ranging conversation today at Salve Regina.

Kagan was interviewed on stage by Jim Ludes, Salve Regina’s vice president for strategic initiatives, before an audience of 1,000 students, faculty, staff and invited guests who gathered in a tent on the Gerety Hall lawn. Her visit comes as the university kicks off a year-long celebration of its 75th anniversary.

“It’s impossible for any citizen to look around and not understand that this country is facing challenges, not the least of which is that the country is so divided,” Kagan said in response to a question about threats to American democracy. “The question of how do we work ourselves through that, not just as judges, but how all citizens work through that, is an important one.”

Kagan said it should almost go without saying that people who disagree with each other can be friends, which elicited a round of applause from the audience. She referenced her friendship with her “hunting buddy,” former Associate Justice Antonin Scalia.

“Justice Scalia was a master at building personal friendships across disagreements and he used to say said if you take it personally, you’re in the wrong job,” she said. “And I think it’s true for life. We should be able to separate these things.”

Kagan talked about her many mentors at every stage of her career, from her mother to her senior thesis advisor who taught her how to write, to the judges she clerked for when she graduated law school – Abner Mikva of the U.S. Court of Appeals for the D.C. Circuit and Justice Thurgood Marshall of the U.S. Supreme Court during the 1987 term.

Kagan, who served for four years in the Clinton Administration as Associate Counsel to the President and then as Deputy Assistant to the President for Domestic Policy, was asked about the distinction between policy and law.

“It’s really important that there be a divide between the two,” she said. “I think the Court does best when it keeps to the legal issues, when it doesn’t allow personal political views, personal policy views to affect or infect its judgment. The worst moments for the Court have been times when judges have allowed that to happen. The very worst moments have been times when judges have essentially reflected one party’s or one ideology’s set of views in their legal decisions. That just can’t and shouldn’t happen.”

While there was no mention of the Dobbs vs. Jackson case or the overturning of Roe vs. Wade, Kagan said the Court’s power of judicial review should not be scrapped, though she thinks that power needs to be exercised with a great deal of modesty and restraint.

And she offered her opinion about why the standard for overturning precedent should be very high. “Law gives rights to people that people ought to be able to rely on,” she said. “A second reason is it is an expression of judicial humility and believe me when I tell you, the judges need to be reminded sometimes the virtues of being humble.”

Kagan also said that when a court stops acting like a court is what makes people afraid. “When you see the composition of the court change and then the whole legal system being kind of up for grabs, and legal rules getting reversed here and there, that’s what makes people worry and that’s what ought to make people worry that something else is going on here other than applying legal principles fairly and consistently,” she said. “It just doesn’t look like law when the new judges appointed by a new president come in and start just tossing out the old stuff.”

Regarding the public’s confidence in the Supreme Court, Kagan said the most important thing the Court can do is go about its business. “The thing that builds up reservoirs of public confidence is the court acting like a court and not acting like an extension of the political process,” she said.