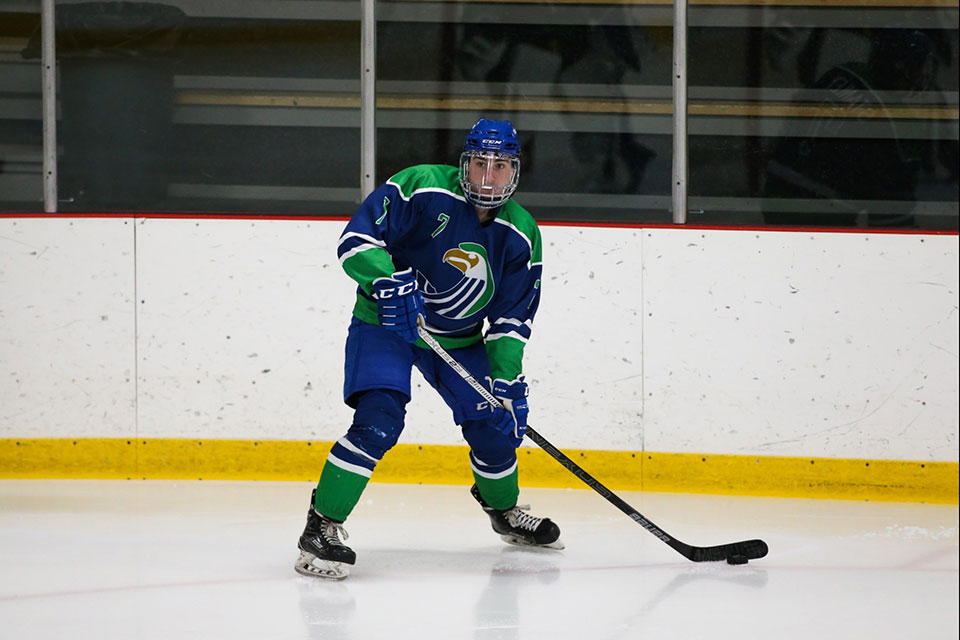 Eruzione was named player of the week after playing major role in Salve Regina’s two wins against conference opponent Western New England University. In the second win, he totaled two goals and two assists. He is tied for the conference lead with six assists this year. “It has been exciting to see Danny develop into a more dynamic player,” said head coach Zech Klann. “He has the ability to leave his fingerprint on any game he plays.”

Rehm was named goaltender of the week after posting a shutout and playing two scoreless periods in the wins against Western New England. He had 28 saves in the first win and another five saves in the second win. “I am extremely happy for Tony and the success he had over the weekend,” Klann said. “He has worked extremely hard and has been very patient over the last year. He has been a lot of fun to work with this year and I look forward to seeing him build on his success.”

Stanley was named rookie of the week after notching one goal and three assists in the two wins. He is currently the highest-scoring freshman defenseman in the nation with a 1.40 points per game average, and ranks seventh among all defensemen in scoring in the nation. “Stanley has had a strong start to the season and I look forward to seeing him continue to develop,” Klann said. “From day one he has proven he is willing to work hard on and off the ice. I am very happy for him to receive conference recognition.”

The Seahawks were recently ranked 12th in the nation by U.S. College Hockey Online. Salve Regina (5-0-0; 4-0-0 CCC) returns to action Friday, Nov. 22, when the team travels to face Wentworth Institute of Technology in another conference matchup.