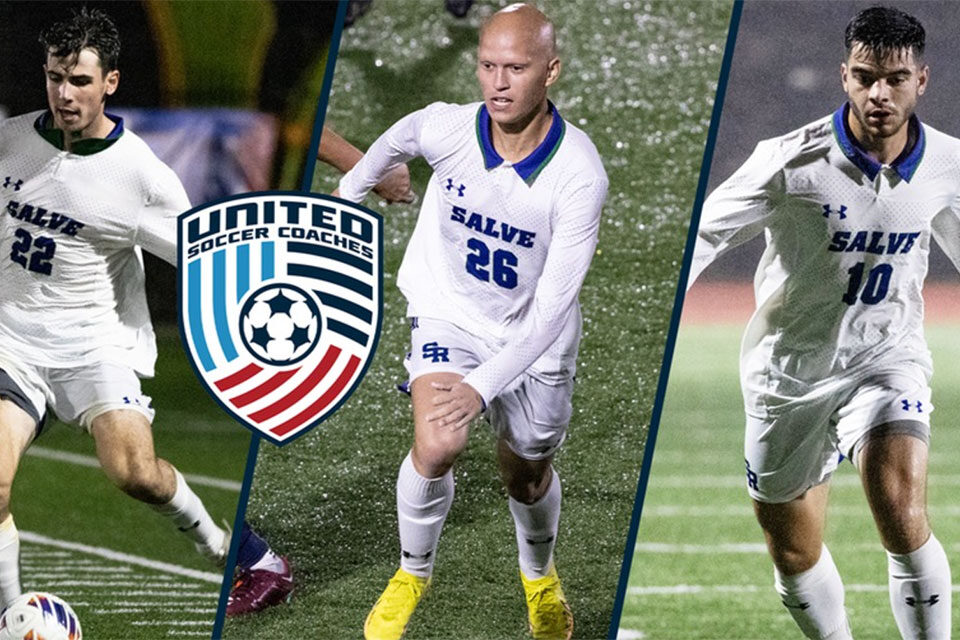 United Soccer Coaches announced their All-Region teams for the 2022 season, and three members of the Salve Regina men’s soccer team were among the honorees.

Evan Arpin ’24 and Jordan Borges ’24 were each named first team All-CCC this past season, while Ben Tomas ’26 was named second team All-CCC.

“I am absolutely elated to see each of these young men be named to the All-Region teams, as they are all truly gifted players,” said Craig O’Rourke II, head coach for men’s soccer. “Having all three of these guys back with us next year will help ease our transition into NEWMAC and keep us playing the brand of soccer that Salve Regina men’s soccer has become synonymous with.”

Jordan has been a dominant attacking threat for Salve Regina ever since he arrived on-campus in 2020, according to O’Rourke. This year Jordan had to perform the dual role of play-maker and finisher and find a way to balance his ability to get forward with his commitment to the defensive shape and line of engagement.

Aprin settled into his more traditional position of centerback after having played the majority of the 2021 season on the width at a more attacking role. According to O’Rourke, Arpin even stepped out of his centerback shackles and committed himself to getting forward in helping to create several absolutely golden scoring opportunities for Salve Regina late in the season.

“Ben Tomas joining us this season and playing himself into that deep-lying central midfield role just absolutely helped to solidify our overall midfield shape and helped us to dominate the ball and play up the field as well as change our point of attack quickly and efficiently,” concluded O’Rourke.

For the full list from the United Soccer Coaches, go here.

Founded in 1941, United Soccer Coaches has grown into the world’s largest soccer coaches’ organization that serves members at every level of the game. United Soccer Coaches works every day to inspire coaches and ignite their passion for the game so they pass it on to players and others in the soccer community.