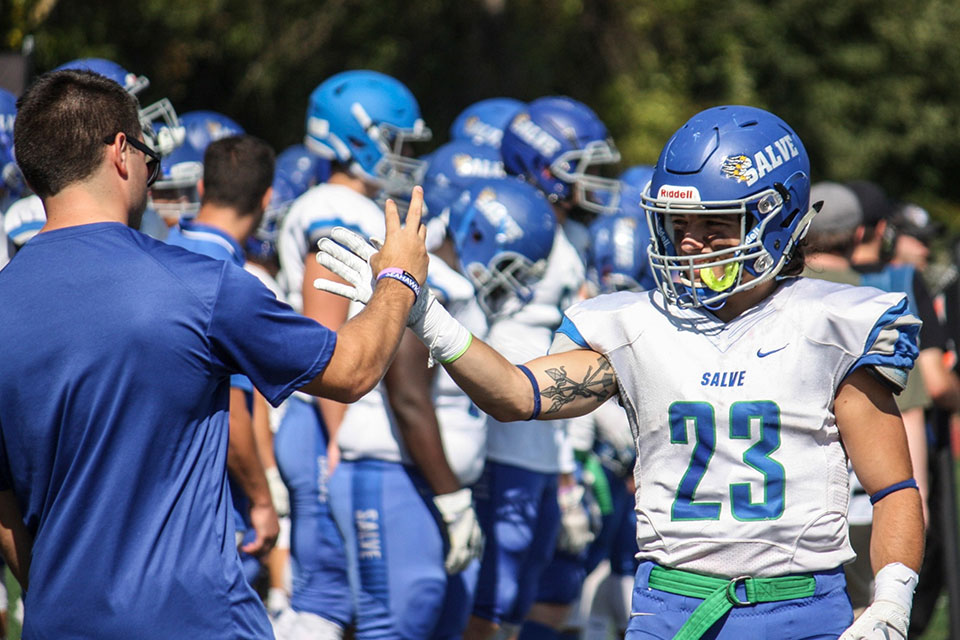 Joey Mauriello ’22 was named offensive player of the week after rushing for 202 yards and five scores in Salve Regina’s conference victory over Becker College. Mauriello, who single-handedly outgained the entire Becker offense, rushed 27 times for a 7.5 yards per carry average. He has scored a program record-tying five touchdowns twice this year.

Mauriello leads all league rushers with a 154.9 yards per game average and 17 touchdowns. His 1,084 rushing yards on the season surpasses last year’s total in four fewer games. He is only the third player in Salve Regina history with more than one 1,000-yard rushing season, and is one touchdown shy of the school’s single-season record.

Nathan Costaninto ’23 was named rookie of the week after playing a full 90 minutes in both of the Seahawks’ conference wins last week. He and the Salve Regina back line held Curry College and Gordon College to just three shots on goal and only conceded a single goal. Costantino also got forward against Gordon to score his first collegiate goal in the 4-0 victory.

James Davies ’22 was named defensive player of the week after centering the back line that allowed only three shots on goal in last week’s wins. In the 7-1 victory over Curry, Davies and the Salve Regina defense held the Colonels to only two shots on goal. They bested that later in the week by allowing Gordon a single shot on goal in the win.

The Seahawks conclude their regular season against conference opponent Wentworth Institute of Technolgy at 3 p.m. Tuesday, Oct. 29 at Reynolds Field.