University community invited to Night at the Newport Gulls 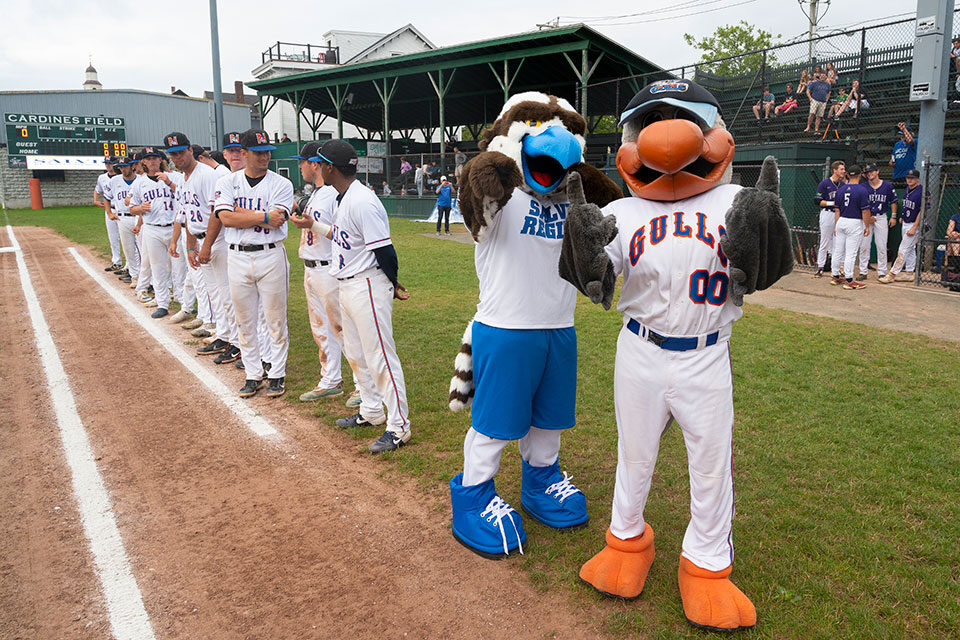 Opening ceremonies begin at 6:15 p.m. and the game starts at 6:35 p.m. as the Gulls take on the Martha’s Vineyard Sharks at historic Cardines Field. Complimentary tickets are available in the Office of Alumni, Parent and Family Programs, located on the third floor of Ochre Court.

Several members of the Salve Regina community will participate in the evening’s festivities, including three generations of the Flanagan family, who will throw out the first pitch. Tom Flanagan is a longtime faculty member in the Department of Business and Economics and previously served as vice president for administrative services and community relations. His daughter, Diane McBrier ’91, is a kindergarten teacher at Pell Elementary School. Granddaughter Morgan McBrier ’18 is a special education teacher at Pell and was also an assistant soccer coach at Salve Regina.

Ashley Bendiksen ’13 will sing the national anthem, and special acknowledgements will be given to Dr. Kelli J. Armstrong, Salve Regina’s eighth president; Michael Falcone ’16, director of baseball operations for the Gulls; Ruggles, Salve Regina’s community resource dog; and former Gulls interns. Members of the Barrington, Scituate and Westerly police departments, all of which are led by Salve Regina alumni, will comprise the honor guard.

Proceeds from the evening’s 50/50 raffle will benefit Salve Regina’s scholarships for Aquidneck Island students, including the Beatrice B. and Samuel Z. Bazarsky Endowed Scholarship, Florence F. and Mary L. Sullivan Scholarship, Mason D. Rector Scholarship and the Ochre Scholarship. Be the Match will also have a swab table on hand. Salve Regina’s football team has partnered with Be The Match for 10 years, registering more than 3,000 participants.

Parking is available in the municipal lot behind the Gateway Center for a reduced rate with a Newport Gulls ticket stub.