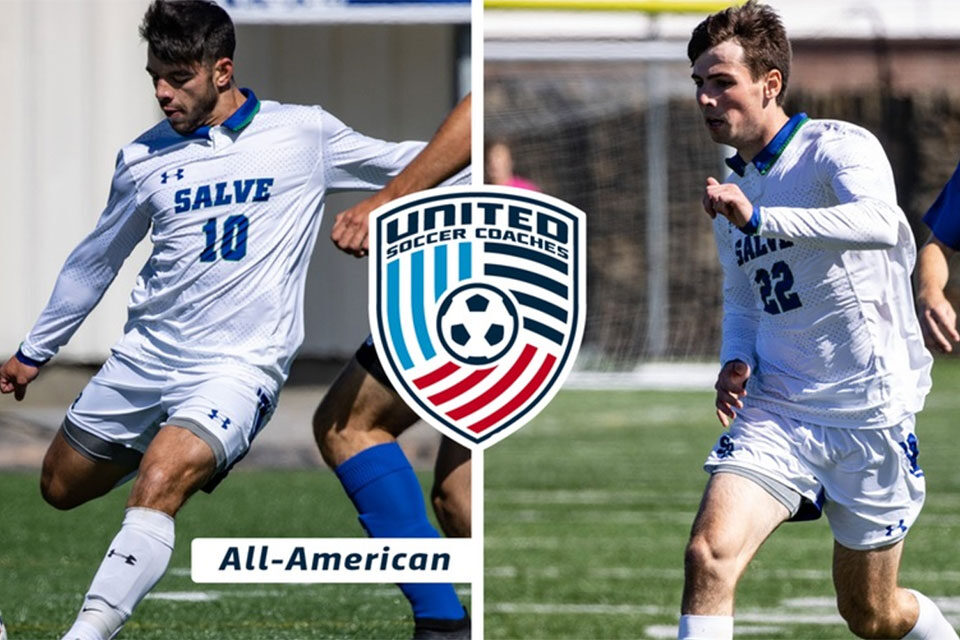 Salve Regina men’s soccer players Evan Arpin ’24 and Jordan Borges ’24 have each been named to Scholar All-Region and Scholar All-American teams by the United Soccer Coaches.

These awards are just a few of many accomplishments in the past season for Arpin and Borges. They were each named to the All-CCC first team this past season, and they were also listed on United Soccer Coaches All-Region teams for the 2022 season.

“Words cannot describe how elated our program is for Evan and Jordan to be named to Scholar All-Region and then become Scholar All-Americans,” said Craig O’Rourke II, head coach of mens’ soccer. “I’ve always considered the moniker of ‘All-American’ to be the highest possible achievement that a student-athlete can garner during their time in college.”

With this award, Arpin and Borges become the sixth and seventh All-Americans in the history of the Salve Regina men’s soccer program, according to O’Rourke.

Jordan has been a dominant attacking threat for Salve Regina ever since he arrived on-campus in 2020, according to O’Rourke. This year Jordan had to perform the dual role of play-maker and finisher and find a way to balance his ability to get forward with his commitment to the defensive shape and line of engagement.

Aprin settled into his more traditional position of centerback after having played the majority of the 2021 season on the width at a more attacking role, but he committed himself to getting forward in helping to create several scoring opportunities for Salve Regina late in the season.

For a full list of Scholar All-Region selections, go here.

For a full list of  Scholar All-Americans, go here.

Founded in 1941, United Soccer Coaches has grown into the world’s largest soccer coaches’ organization that serves members at every level of the game. United Soccer Coaches works every day to inspire coaches and ignite their passion for the game so they pass it on to players and others in the soccer community.